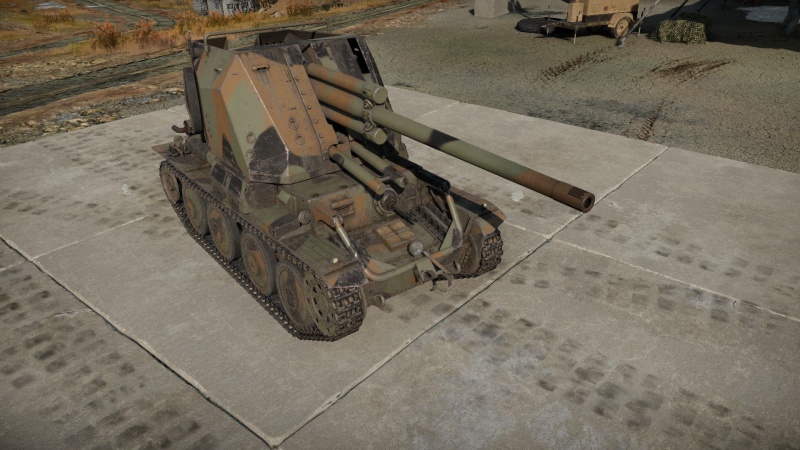 The Pansarvärnskanonvagn II is a rank III Swedish tank destroyer with a battle rating of 3.7 (AB) and 4.0 (RB/SB). It was introduced in Update 1.97 "Viking Fury".

The Pvkv II shares the same hull as the Strv m/41, and thus the hull armour is identical. While adequate for the light tank, the armour is no longer sufficient against the considerably greater firepower that the Pvkv II faces.

It also features a massive open-top turret that is very thinly armoured and very vulnerable to even heavy machine guns. The turret, and vehicle in general, is rather cramped, thus a penetrating hit usually results in critical damage to multiple modules and crew members. Due to this aircraft are also a very dangerous threat, as even light machine guns will shred the crew through the open roof.

However, the turret is not directly connected to the hull and the turret floor is 8 mm of RHA thick, so weak APHE detonations in the turret often do nothing to the interior of the hull, making it difficult to finish off the Pvkv II, unless enemy uses overwhelmingly strong APHE or chemical ammunition (which will cause overpressure damage and destroy the SPG). This also allows to use the turret as a bait, as until enemy realizes that simply firing at the turret isn't going to destroy the SPG, the driver and radio operator can drive away with the remaining of it, while allies are leading an attack. If enemy fires at the hull and somehow misses the ammo racks, its also equally possible that the turret crew will take no damage, which can be even worse for the enemy if the gun was pointing at them.

Since ammunition is also stored in the turret and its armour cannot be relied upon, only 17 shells should be carried at all times to avoid instant tank destruction in case of penetration. This allows the Pvkv II to take some direct hits.

Being based on the Strv m/41, the Pvkv II's mobility is somewhat worse due to the massive turret and heavy gun mounted. The reverse speed is also quite poor, at only 5 km/h. It is thus a relatively clumsy and unwieldy vehicle to drive.

Due to the relatively high center of gravity, care must also be taken not to allow the vehicle to roll over onto its side when driving on slopes or making turns.

The Pvkv II mounts a 7,5 cm lvkan m/37 A anti-aircraft gun modified for the anti-tank role. This gun is quite powerful but has a very low rate-of-fire for its calibre, likely due to the rather cramped nature of the vehicle. The gun mounting is angled downwards, allowing for an excellent 14° of gun depression, though the gun elevation is limited to only 17°. The turret allows for full 360° traverse, but turns quite slowly and shouldn't be relied upon too much.

The gun wobbles when the tank changes the pace of movement, so even simply slowing down will mess with the aim, let alone a full stop. Researching movement upgrades improves the situation by reducing the tilt, but never completely fixes the situation.

The gun starts with the very mediocre slpprj m/41 uncapped AP shot that has good penetration but tends to ricochet and has rather anaemic post-penetration effects. The gun only starts to really shine once the Tier IV slpgr m/43 APCBC shell is unlocked. With this shell, the Pvkv II gains even better penetration than the Delat Torn and Pvkv m/43. The APCBC shell also has a highly lethal 110 g TNT filler.

It's recommended to also take at least two of sgr m/38, as it will obliterate tanks like the M10 GMC and all kinds of trucks, which are difficult to fend off with kinetic ammunition and can destroy the Pvkv II in one hit. Furthermore, these SPG usually cannot fire back at the Pvkv II at angles which allow for HE to be used against them.

The gunsight has maximum amount of magnification possible for a tank, making aiming at long range targets much easier. 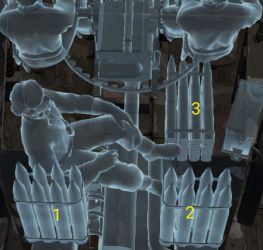 Ammo racks of the Pvkv II

There is one 8 mm ksp m/36 machine gun mounted in the front hull, though its utility is rather limited due to the limited traverse and elevation.

The Pvkv II is a classical tank destroyer that does best in a good hull-down position where it can accurately hit enemy vehicles at long range. The combination of great gun depression, a fully rotating turret, and an amazing gunsight allow for considerably more flexibility than conventional casemate tank destroyers. However, it is a very fragile vehicle, especially to air attacks and High Explosive shells, and must be played carefully accordingly. It is especially well-suited to long-range fights due to a combination of a powerful high-velocity gun and good optics, as well as the inherent fragility of the vehicle.

It is possible to use the Pvkv II as a sort of backline tank and will not have a high survival rate at a direct confrontation, which makes it important for the Pvkv II to act as a supporting vehicle from a distant position to help allied tanks take out what their guns are lacking. A lonely Pvkv II can be a easy prey for fast light tanks or medium tanks, due to a slow turret traverse making the gun hard to aim at fast moving targets that are not moving towards the Pvkv II or away from it, Even if moving the hull it can not be enough to keep up with a vehicle like BT-7, T-34 or SARC MkVI (6pdr).

The Pvkv II's shells can have trouble with angled fronts at certain distances, T-34 sloped fronts can be a tricky opponent even though it doesn't have a really thick armour it can with its sloped armour still bounce a lot of shells even the better rounds from the Pvkv II. Also if Pvkv II faces multiple opponents it might give it a challenge, even though it have a relative fast reload, it needs to aim at carefully to hit where it wants, movement will make the gun wobble, making it hard to hit accurately on multiple targets if it is in dire need to get the gun pointed at the enemy and decides to turn the hull. Pvkv II being an open top vehicle makes it a very easy target for enemy artillery and airplanes to take it out where enemy ground vehicles will have a hard time, So even if a Pvkv II manage to lockdown a road or area it is still not safe from the threats from above.

In the immediate postwar years and going into the Cold War, Sweden found itself woefully under equipped for any potential new conflict breaking out. Particularly when talking about tanks, the Swedish military was mostly relying on outdated light tanks and tank destroyers of the WWII era, while only possessing a handful of modern vehicles, adequate for modern requirements.

Although the immediate solution to the problem would be to procure suitable new tanks, this wasn't an option for the Swedish military in the postwar period as the armed forces found themselves subject to many budget cuts and thus lacked adequate funding to procure new vehicles.

Instead, the Swedish military put out a set of requirements to convert existing tanks into more capable tank destroyers by outfitting them with large-calibre anti-aircraft cannons. The conversion was envisioned to be quick and very cost-effective and act as a stopgap solution to the problem at hand.

As a result, one of the vehicles that came into being under this programme was the Pvkv II - a Strv m/41 converted into a tank destroyer by having its old turret replaced with a new one, housing a 75 mm converted AA cannon. Despite proving itself as a capable vehicle during comparative tests with the AMX-13, only two prototypes were built as by 1953, the Swedish military soon adopted the Strv 81 (Centurion Mk.3), thus eliminating the need for conducting further work on the project.