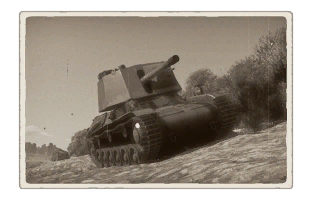 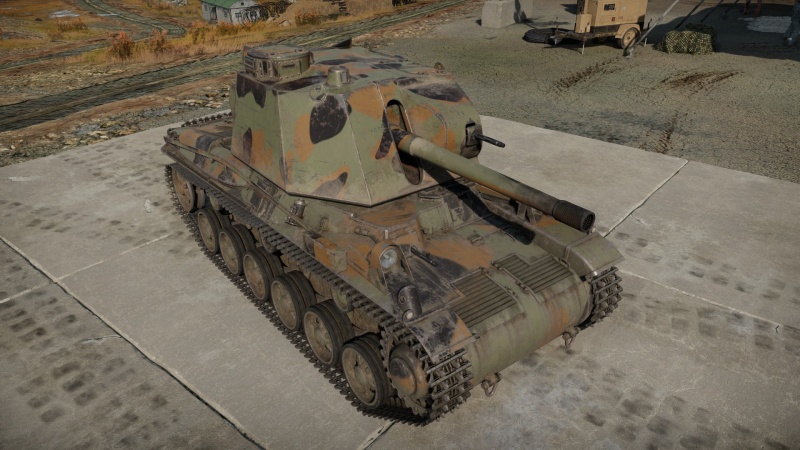 However, the Strv m/42 DT also sports a new turret to house the more powerful gun. The turret front is 60 mm thick, and the right side and area around the main gun is an angled flat plate. While not very thick, it is capable of ricocheting some rounds if the effective angle is increased using the excellent gun depression of the Strv m/42 DT. The left side housing the machine gun is rounded and is a weakspot when hull-down.

It is important to note that the turret has an open rear that exposes the crew to machine gun fire and shrapnel. It is also a considerably bigger target than the Strv m/42's turret. Most importantly, the gun autoloader is poking out of the turret and can be easily damaged by any aircraft, which is arguably even worse than losing a crew member.

Close artillery misses won't destroy this tank, but any direct hit to the turret's roof will penetrate and decimate the entire crew. HEAT hits on the turret front won't result in overpressure damage.

Unsurprisingly, the mobility of the Strv m/42 DT is very similar to that of the Strv m/42. It can reach a respectable top speed and will usually be able to keep up with most advances, but suffers from a low reverse speed of about 5 km/h that makes it harder to back up from hull-down positions or into cover.

The Strv m/42 DT is armed with the same 7,5 cm pvkan m/43 used by the Pvkv m/43 tank destroyer. However, on the Strv m/42 DT, the gun is fed by a special semi-automatic loader with a four-round clip (similar to the Japanese Chi-Ri medium tank), allowing for a fast five-round burst (including one pre-loaded in the gun barrel) after which the gun must be reloaded manually.

With the autoloader, the reload takes from 3.9 to 3 seconds, which otherwise would take around 8-6 seconds. This allows the tank to swap between kinetic and HE shells on the fly and to sometimes reload before enemy drives out of cover to retaliate.

As is usual for Swedish vehicles, the turret provides for decent gun depression an -10° , though gun elevation is limited to only +12°, which stops the tank from fighting when charging down or along the side of a hill. The gun stabilizes rather quickly as long as the targeting skill of the crew is maxed out and tank isn't driving over rough terrain.

On a capture point, each spent shell is restocked in about 5.5 seconds. This is important to keep in mind, as the semi-auto loader rearms extremely slowly, forcing the tank to not fire for 25 seconds after the last shot for the first shell to be loaded and another 18 for each next one. Restocking the autoloader magazine on a capture point circumvents this and reloads the autoloader faster, which might allow to repel more tanks than normal.

The Strv m/42 DT starts with the rather underwhelming stock slpprj m/41 uncapped AP shot, which has no explosive filler. However, at Rank IV the excellent slpgr m/43 APCBC shell becomes available. Not only does it ricochet less than the stock AP, has a higher muzzle velocity, and has better penetration, it also has a lethal 110 g TNT filler that is devastating when it penetrates.

The penetration of kinetic shells is not very good for a tank of this BR, but the Strv m/42 DT is quite tall and at close to medium range it can negate enemy angled armour with that alone.

The sgr m/38 is not to be ignored, as there are a lot of open-topped SPG at the rank, which are difficult to take out with kinetic ammunition, but will definitely fail to reload before HE is fired at them, should they survive the first shot. 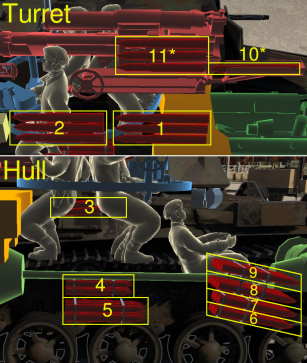 The Strv m/42 DT has a standard 8 mm coaxial machine gun. While it is slightly bigger in calibre than 7.62 or 7.7 mm MGs met on comparable vehicles, the machine gun lacks penetration power to damage most opponents. Nevertheless the ksp m/36 machine gun can be used against open-topped vehicles. Furthermore, it also has an additional 13 degrees of elevation which can prove useful in engaging enemy planes.

The Strv m/42 DT's standout feature is an excellent reload rate, which can be as low as 3 seconds. To complement this gun, the Strv m/42 DT is equipped with a stock AP round, and an APCBC shell which has reasonable penetration and explosive filler values compared to similarly-sized rounds at this tier. At its best, the gun will easily blast most medium and light tanks, but will struggle with the heavy tanks, so choose your fights accordingly.

This vehicle is not especially well-armoured. It can often withstand one or two hits, but any more and it will usually be destroyed. Taking high ammunition loads further hampers the tank's survivability, as it makes the chance of an ammunition detonation significant. From the side, a weak armour setup means that autocannons on many anti-air vehicles can penetrate and deal massive damage to internal components. This means, that tank commanders might want to rely on teamwork, much like with the Pvkv II, as either teammates take the hit and leave the enemy exposed to at least two counter shots, or finish the job while the Strv m/42 DT repairs or disables something else. Either way, with armour this thin, it is necessary to pay attention to enemy flankers.

The Strv m/42 DT's hull is taken from the earlier Strv m/42 EH, and thanks to an improved engine, is above-average in terms of mobility. When stock, mobility can be sub-par, but once mobility modules have been researched, the tank becomes quite capable in this department. With this level of mobility, it can acquire ambush positions or act as a viable flanker. (In such situations, the gun's quick reload makes itself very useful; the Strv m/42 DT is able to destroy multiple unsuspecting enemies in quick succession.) One thing to note is that this tank has a poor reverse speed, which can make peeking and firing from behind ridgelines dangerous.

In hull-down positions, this vehicle can use its great gun depression to effectively fire at enemies from behind cover, but it's best to avoid exploiting it to try and fight over high hills, as it's not as great as on the SPGs and tanks before it.

In 1944, the Swedish military considered upgunning the Strv m/42. They designed a new turret with a new 75 mm gun with an autoloader. The turret was named "Delat Torn", which means "split turret" in English. This name comes from the fact that the autoloader would split the turret down the middle into two separate compartments. The gun was set as far back as possible inside the turret in order to reduce how much of the barrel hung out of the turret. In 1944, a mockup was made, with a wooden turret. The prototype was made in 1945, and it was tested throughout 1946. It was found that the design was unsuccessful, and it never entered production or service.