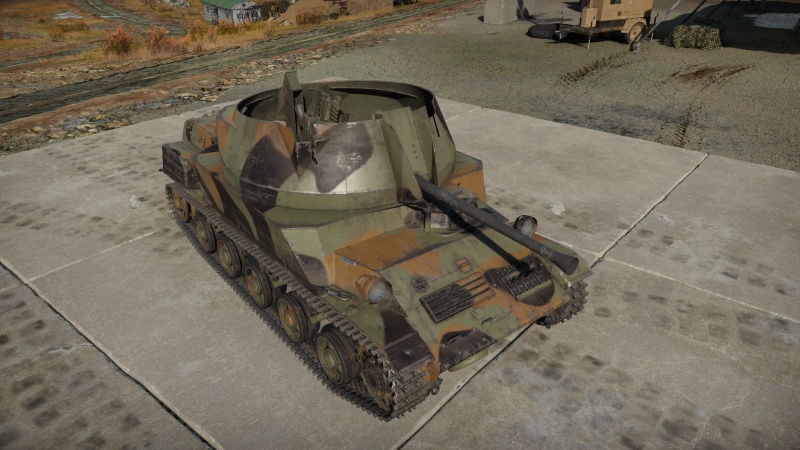 The Landsverk L-62 ANTI II is a rank III Swedish SPAA with a battle rating of 3.7 (AB) and 2.7 (RB/SB). It was introduced in Update 1.97 "Viking Fury". One can treat it as a sidegrade of the Lvtdgb m/40, as such most of the text onward will compare them, rather than just describe this one.

When one looks at the L-62 ANTI II, it's expected to have decent protection, when in reality it's armoured like the reserve tank Strv m/38. As such, its hull and the turret will only sustain rifle-calibre MG.

The gun shield is expected to protect the crew in case of a brawl with a light tank, but it's only 8 mm thick and can be penetrated by anything at point blank range. It's also way too small to protect the SPAA from any aircraft.

Depending on the BR of opposing tanks, the turret crew armour may protect from enemy tanks, many rank I and II tanks can be too short to fire over it, but most of rank III tanks (which will be the norm in AB, as the L-62 ANTI II belongs to the rank III lineup by default) will not only be too tall for it to matter, but will have HMG that can penetrate it anyway. Regardless, the turret has a lot of openings which allow any tank to decimate the entire turret crew if they try harder. The turret is also way too short and inconsistent to protect from any decent pilot and might as well not exist in case of an air strike.

Compared to the Lvtdgb m/40, technically the protection is supposed to be better, but in reality it just provokes tanks to fire APHE or HE at it, immediately destroying the tank. There is also no longer a possibility to just face them with the front and to lay suppressive fire, expecting the driver cab to stop incoming attacks - the whole interior is now interconnected. But it may protect from MG in RB/SB due to the SPAA's lower BR there.

Technically, it's difficult to notice the L-62 ANTI II as it's not a truck and looks like a tank from afar, so in RB/SB it can pass as something less dangerous to aircraft and faraway tanks until it starts to fire. In AB, its class will immediately alert everyone of what it actually does and every aircraft will immediately go after it.

It is effectively slower than the Lvtdgb m/40, but can turn around in place even without neutral steering, which makes it better when fighting inside of a town.

The gun and the ammunition are the same as the Lvtdgb m/40. The only noticeable differences are the slightly reduced recoil, the fact that the gun is able to fire straight in any direction and the slower traverse speed, requiring the hull to be turned at the same time to catch up to an enemy.

The first prototype of the L-62, named ANTI I, was built by the end of the 1930s in parallel with the L-60 then tested. While the Swedish military didn't express interest in procuring the L-62, the Hungarian military purchased the production licence for both the L-60 and L-62, resulting in the creation of the domestically produced 38M Toldi and 40M Nimród tanks, respectively.

Landsverk continued developing the L-62 into the early 1940s, creating a more advanced version of the L-62 in 1941, called the ANTI II. The improved version featured a new hull and turret, as well as having its German transmission swapped out for a Swedish one.