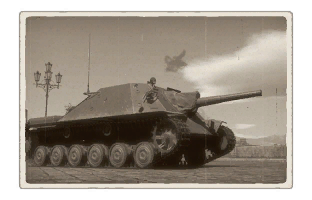 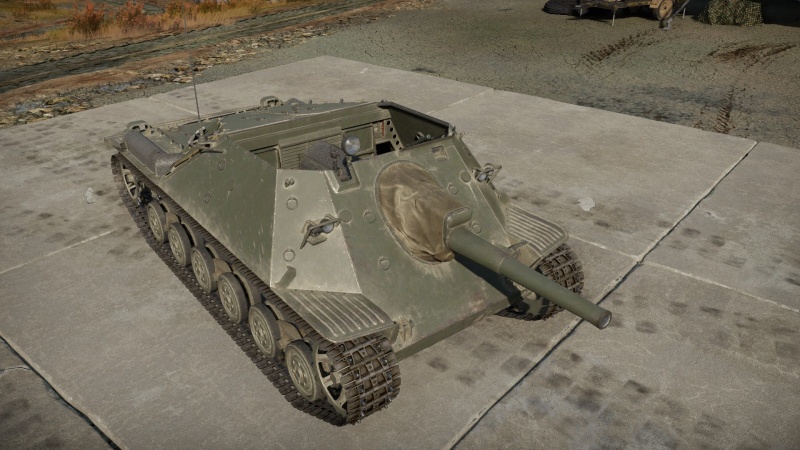 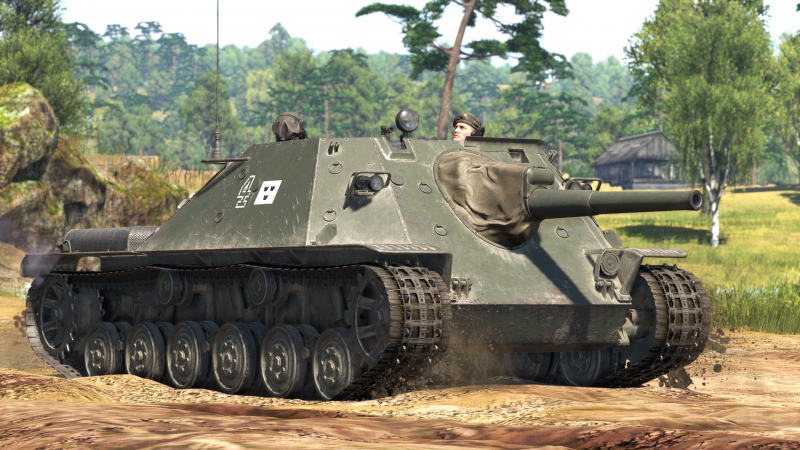 The Infanterikanonvagn 72 is a rank I Swedish tank destroyer with a battle rating of 1.7 (AB/RB/SB). It was introduced in Update 1.97 "Viking Fury".

With a maximum frontal armour thickness of 18.5 mm, the Ikv 72 has nearly no armour to speak of. The side armour is almost negligible, and can be penetrated by even rifle-calibre machine guns at point blank ranges. Aircraft are particularly deadly, as the vehicle has an open-topped crew compartment, and what little roof armour there is is only 5 mm thick at most.

The crew compartment is very cramped, and any hit by a large shell is liable to disable multiple crew members, if not all of them, simultaneously.

The Ikv 72 trades armour for mobility, boasting an excellent power/weight ratio and a high top speed of around 60 km/h. This allows it to easily get to good positions where it can put its powerful gun to best use. A high reverse speed also allows it to easily back off, and is particularly valuable when fighting in hull-down positions, where it can use its excellent gun depression to its advantage.

The Ikv 72 is armed with the 7,5 cm kan m/41, a rather conventional quick-firing 75 mm field gun. It starts off with the unremarkable slpprj m/40 uncapped AP shot, which is adequate against most opposition it may encounter but tends to suffer ricochets against sloped armour. However, once upgraded, the gun may fire the slpgr m/39 uncapped APHE shell and the slpprj m/40B APBC shot. The former round has a very lethal 260 g TNT filler but tends to ricochet more and has less penetration, while the latter has better penetration and ricochets less, and is thus more useful in uptiers. It is recommended to carry a mixture of both APHE and APBC unless the Ikv 72 is top tier, in which case the APHE alone is sufficient.

The gun also has an outstanding ±20° of gun elevation, allowing the Ikv 72 to take advantage of hull down positions that most other tanks cannot. 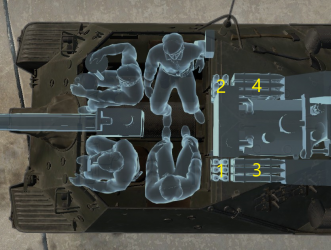 Ammo racks of the Ikv 72

The Ikv 72 is a relatively light armoured tank destroyer which had a purpose of supporting the infantry during attack charges and taking out enemy positions and light targets. Ikv 72 has relatively high speed and mobility making it able to quickly get to points and positions like a light tank and ambush enemies with, it has great penetration capability with its stock round and will unlock another great round, the slpprj m/40B, as a tier 4 modification. Armed with a 75 mm Kan m/41, the Ikv 72 has great firepower for a low tier tank destroyer with also a decent amount of 42 rounds it can bring into battle compared to the SU-5-1 which can only bring 8 rounds.

The Ikv 72 excels at fighting from hull down positions, using its outstanding 20 degrees of gun depression, low silhouette, and high reverse speed to limit exposure when taking shots. The high reverse speed also helps in city fighting when it has to quickly retreat after taking a shot. It is fast enough to keep up with even light tanks and can use this to take up unexpected positions from which to strike at the enemy making it an excellent ambush tank, both in hilly terrain and city fighting.

The negative things with Ikv 72 is the compact crew compartment makes it easy for shells to easily knock it out, and being open top exposing it to machine gun fire from enemy aircraft and tanks. Also the weak armour makes it easy for any tanks and heavy machine gun to penetrate with ease, hence it's advised to go for ambush tactics, where the Ikv 72 can get the first shot on the enemy. One other negative thing with the Ikv 72 is the low velocity on the shells, making it harder for it to take up a "sniper" position to be efficient which makes the Ikv 72 more adapt at close to medium range combat, so try to find a good postion that is not too far away for intended target.

Things to be aware of in the Ikv 72 are mostly tanks or trucks with heavy machine guns or autocannons like Pz.II C, GAZ-MM (72-K), T17E2 and Ta-Se, which will tear the Ikv 72 apart with ease in direct confrontation with it. Hence trying to keep as low attention as possible on the Ikv 72 will be to its advantage where it can without being fired at take shots on enemy tanks from its position.

The Infanterikanonvagn 72 was a project started in 1949 by Sweden for an assault gun. The intended role of this vehicle was to support the infantry in the attack, replacing towed artillery guns. The design was to be small, and of light weight, around 6 tons. This was to reduce costs so a larger amount could be produced. The first prototype from Landsverk, completed in 1950, was armed only with three machine guns. This was insufficient, and it was re-armed with a 75 mm cannon, the same gun from the Strv m/42. It was a small, lightly armoured vehicle, with a casemate superstructure housing the 75 mm gun. It had a crew of 4, and it was open topped. The Ikv 72 was later upgraded to the Ikv 102 and Ikv 103 standards, receiving an armoured roof for the crew compartment, a 105 mm gun, and other improvements. The design weighed about 8 tons.