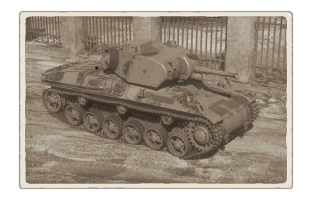 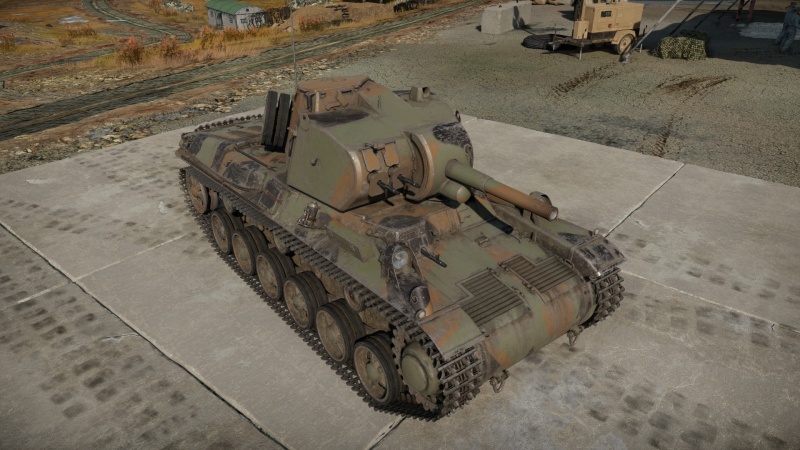 It is a further development of the Lago I medium tank.

The Strv m/42 has increased frontal protection compared to the Lago I. Both the hull and turret fronts have a maximum thickness of 55 mm, which provides good resistance against small calibre anti-tank guns and autocannon fire. However, the side and rear are still quite thin, and are only resistant against heavy machine guns. The engine deck and turret roof are only 9 and 10 mm thick respectively, and are thus vulnerable to aircraft cannon and heavy machine gun fire.

Despite this increase in armour, the Strv m/42 can still be easily penetrated by the upgraded guns that come with the shift from 2.7 to 3.0. Notably, the long barreled Panzer III's, M4A1, Chi-Nu, and the P40's HEAT round can all cut right through your armour like paper. It is highly recommended to avoid head-on engagements with these opponents, although you can compete with the Chi-Nu and P40 if you manage to get the first shot off due to their relatively weak armour.

When being up-tiered to 4.0, the Strv m/42 will have to play like a light tank flanker, as any gun at 4.0 can penetrate it and the m/42's cannon will rarely frontally penetrate due to the increase in armour. The worst enemies for the m/42 to face at 4.0 are the Pz.IV F2, T-34E STZ, T-34-57, Achilles, M4A2 and Breda 501. All of these tanks can either punch right through the Strv's armour and/or are virtually invulnerable to its cannon frontally, with the exceptions being the Breda 501 and the Pz.IV F2.

The Strv m/42 is considerably heavier than the Lago I, but the engine is uprated to compensate for the increased weight. The mobility is therefore not significantly affected and is quite adequate for a medium tank of its tier. It has a relatively low reverse speed and the long hull relative to its width also has a noticeable impact on its turning ability.

The Strv m/42 is armed with the 7,5 cm kan m/41, the same 75 mm field gun found on the Ikv 72. While quite respectable on the Ikv 72, the gun is not quite as competitive on the Strv m/42 due to the heavier opposition it will face, such as the Churchill and KV heavy tanks. The turret does provide an excellent amount of gun depression (15°), allowing for more hull-down opportunities.

Like on the Ikv 72, the gun starts off with the slpprj m/40 uncapped AP shot, which unfortunately tends to suffer ricochets against the sloped armour that is increasingly common at the Strv m/42's BR. The gun may also be upgraded to fire the slpgr m/39 uncapped APHE shell and the slpprj m/40B APBC shot. The APHE round has a very lethal 260 g TNT filler but tends to ricochet more and has less penetration than the other rounds. It is best used when presented with sideshots against tanks with weak side armour. The APBC ricochets less, although the penetration is still rather inadequate. It is recommended to carry a mixture of both APHE and APBC.

The Strv m/42 EH is a fairly conventional medium tank that distinguishes itself with its excellent gun depression. It thus excels in hull-down positions or ridge-fighting. However, the gun is quite weak and will struggle in uptiers against angled and well armoured tanks. Enemy tanks like KV-1 and Churchill are almost untouchable for the Strv m/42 EH to take head-on, but also tanks like T-34 and M4 Sherman can be quite troublesome as well to face head-on with the Strv m/42 EH's short 75mm. If Strv m/42 is played properly it can be a troublesome tank to deal with for the enemy as well. Strv m/42 has a relatively decent armour for its battle rating, and the turret armour is well rounded for shells to bounce off it. The Strv m/42 EH's modest mobility and high profile makes it not the best for flanking manoeuvres, but its excellent gun depression makes it a great tank for ambushes from hills and elevated positions. Where the 75 mm is not enough for frontal engagement, it's best to retreat and find a position where the gun can take a shot at the enemy vehicle's side or rear armour.

The Strv m/42 EH gun has got one of the worst penetration shells for a medium tank at its battle rating. The Slpprj m/40 (AP) and m/40B (APBC) rounds got a top penetration of 85 mm at 10 metre range. It's enough when facing its own battle rating peers and when downtiered, but really lacks the penetration for an uptier battle. The Strv m/42 EH has also got a third shell, the slpgr m/39 (APHE) that will deal the most damage if it is able to penetrate the target. However, the Slpgr m/39 only has 63 mm penetration at 10 metre range, which makes it efficient at 2.0 downtier and almost useless in a uptiered situation. But if the Strv m/42 EH manages to flank and hit the enemies from the side, the shells will be able to penetrate and destroy enemy targets with relative ease, although it might struggle against heavy tanks like KV-1 and Churchill still.

Targets the Strv m/42 EH should be aware of are tanks like:

Strv m/42 EH is a continued development of the AB Landsverk tanks designated Lago I, that Hungary had requested back in the 1930s. When Sweden in 1942 requested a new heavy tank from AB Landsverk that was going to be over 10 ton but below 22 ton mark and armed with a 75 mm cannon, this gave AB Landsverk the opportunity to continue development of the Lago I. In Swedish use it would be designated Strv m/42 and would come in 3 different versions during the second world war, the first version Strv m/42 TM, second TH which would have same engines as the TM but a new hydromechanical gearbox from Lysholm-Smith, third version EH which only had one engine with a newly developed A8B engine from Volvo while TM and TH used two Scania-Vabis 603/1 engines. EH also got a hydromechanical gearbox from Lysholm-Smith but this was larger and improved compared to the TH version.

Only 57 of the 282 Strv m/42 tanks ordered were produced to the EH standard, TM and TH being the other 225. Strv m/42 was a tank that was quickly outdated when it arrived, lacking in armour and firepower when they were being deployed. The Germans and Soviets had gone from short 75 mm to longer and heavier calibre guns when the tanks were being delivered from 1943 to 1945. And in middle of 1950's when Sweden bought in the Strv 81 the Strv m/42 was replaced with, Strv m/42s got refitted and rebuilt, Strv m/42 TM that had changed to TV with a new gearbox, TM/TV along with TH got rebuilt to Light Tank Strv 74 with their turrets used for coastal and airfield defenses, meanwhile Strv m/42 EH got repurposed for infantry support and got redesignated as Ikv 73.