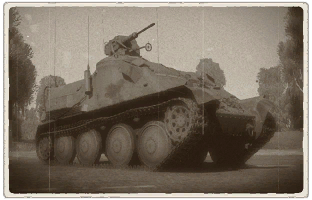 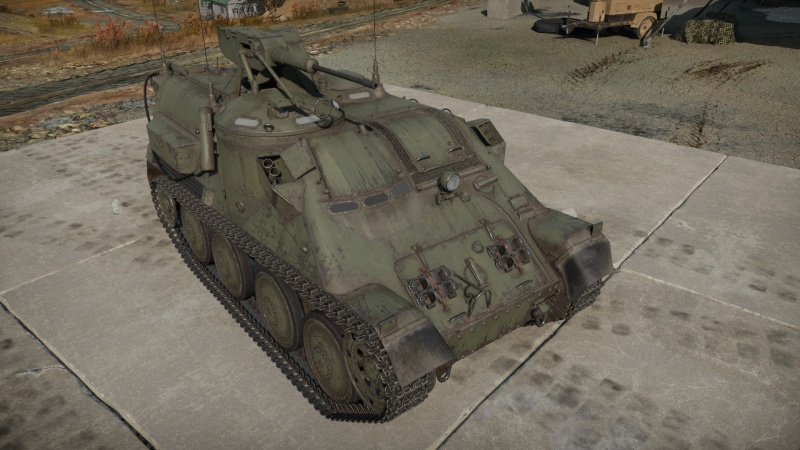 The Pbv 301 is a small casemate with a sloped front. The driver and the gunner are located on its right front side, while the engine is located on the left. The back has spare magazines on the floor and otherwise is completely empty.

Due to a slope and the 20 mm of RHA, the hull front will sustain 12.7 mm machine guns and might sustain 20 mm fire from the low ground (but not the high ground) or from about 500 m away. The lower frontal plate is 50 mm RHA and will sustain some explosions.

The sides and the back are only 8 mm RHA and should not be exposed if at all possible, whether fighting against tanks or aircraft. If it is necessary to flank other tanks and expose the sides, only the left side should be visible, as the engine will often take a hit for the crew. Despite poor side armour, the Pbv 301 takes only minor overpressure damage from close artillery strike misses and can survive standing in it.

It's technically possible to penetrate the gunner cupola, since its edges are only 8 mm thick, but it is very difficult to do without knowing, and most opponents won't have a clue.

Due to its low profile, the Pbv 301 can hide behind other tanks, rocks or hills and only expose the autocannon. In such case, it becomes anywhere from difficult to near impossible to take the Pbv 301 out, as many will aim at the gun itself, but not at the ammo belt, and gun hits won't be fatal, unless made with high-explosive shells, which are mostly carried by SPGs at the BR, not to mention that medium tanks of some nations don't have any explosive filler at all in their rounds.

If everything else fails, this SPAA has smoke screens (which is already incredibly rare for SPAA as a class and won't be expected at all) and there is not just one, but two groups of them as well. These can blind enemy players and disable aim assist in AB after 5 seconds. Unfortunately, it is usually necessary to fire off both groups at once, as otherwise the smoke wall is often incomplete.

The gun is similar to 40B on the previous SPAA, but with a lot of quality of life upgrades.

There are now 6 belts with 75 shells each, and the gun can fire twice as fast, allowing for smoother shell streams. The turret turns a bit faster and allows the gun to turn slightly more down or up. All of this ensures that SPAA can take down planes before they get into the dead zone.

The Pbv 301 still can fight back against other tanks, whether by firing at their weak spots, or by breaking their tracks (to force them to turn) and then hitting their side or running away. It is ill-advised to attack medium tanks frontally, particularly of higher BR. Most heavy tanks will ignore the 20 mm fire with the present ammunition. Most British and Soviet tanks at a higher BR are immune to the 20 mm attacks (in the case of the British, even their SPAAs can in some situations be immune to 20 mm cannon fire).

Pbv 301 can fire over obstacles that other tanks can't use. Pay attention to the map.

Since the autocannon is placed above the tank and, if proper cover is taken, only the gun and ammo belt are visible, the Pbv 301 can obliterate entire light tank squads at its leisure and make charging medium and heavy tanks slip up and become a target for allied SPGs without any fear. It's also possible to ambush tanks from usually impossible angles, as the gun is technically as tall as a heavy tank. This can be done over some hills as well due to a decent gun depression.

The downside of the new gun is that the reload now takes 10 seconds, which technically could be avoided on the predecessor by not overheating the weapon. It is better to unload the half-empty belt somewhere safe before trying to attack.

It's usually safe to help your teammates when they are in trouble, just do not overextend.

The Pbv 301 shall be used mainly as an SPAA. Its cannon with its pinpoint accuracy and a high rate of fire for its BR along the slsgr m/42 HEFI-T belt prove devastating to deal with low-flying planes and bombers. During a game, it is recommended to either stay within the confines of your spawn or to stay somewhere safe nearby to the main allies group and scout the skies for any aircraft. The high muzzle velocity and rate of fire make this vehicle effective against aircraft at medium ranges. 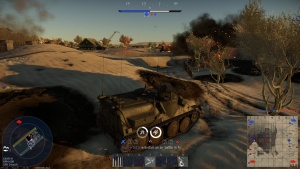 In proper cover and with decent support, the Pbv 301 is effectively invincible.

In an anti-tank role, the Pbv 301 is only effective against light tanks, light SPGs and SPAAGs, as the frontal armour of most medium tanks at its BR or higher is thick enough to resist 20 mm cannons shells. It is therefore not recommended to play this tank offensively in an uptier, since attacks have to be done from the sides, which is not always possible. Avoid playing super agressive against Soviet or British, which have a lot of tanks being completely immune to the 20 mm.

Situation changes drastically if proper medium-sized cover is present, as the Pbv 301 then can work as a portable indestructible turret, particularly if that cover is also a capture point, as they provide spare ammunition. While it's still necessary to pay attention to the skies (to avoid being strafed through poor side armour or bombed), most tanks would need explosives or a lot of artillery to be able to deal any real damage or to force it to move. The engine also has a tendency to catch lucky overhill shots, if the left side is in the front. Depending on the distance between enemy cover and SPAA, it can cause various levels of nuisance even to the tanks which are immune to the 20 mm, starting with annoying sprays into their viewports (which can tilt them and force them to make a mistake) and ending with actually deadly track breaks, as charging behemoths will be forced to turn about 90 degrees upon losing a track if they do not hit the brakes immediately, which is more than enough for any medium tanks nearby to instantly destroy them.