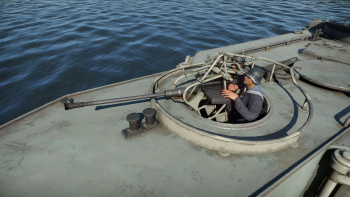 The 2 cm/65 C/38 has a very large TNT equivalent explosive mass compared to other guns of similar calibre. While the C/30 can struggle to destroy enemy boats with one magazine, thanks to the increased magazine size, the C/38 has no problems in this aspect. This, combined with the greater rate of fire over the C/30, lets the C/38 be even more effective weapon against enemy boats.

However, the 2 cm/65 C/38 is held back by its effective range of approximately 2 km using the 20 mm HET belt. This can be slightly increased to approximately 2.3 km using the 20 mm APT belt, although even so, hitting moving targets at such ranges can be difficult. Boats armed with 2 cm/65 C/38 should instead aim to close the distance and overwhelm enemy boats with their firepower.

The effective range of the 2 cm/65 C/38 is approximately 2 km with the 20 mm HET belt, though if using the 20 mm APT belt, the effect range can be increased to roughly 2.3 km. Even so, hitting moving targets at such ranges can be difficult because of the relatively low muzzle velocity and the small mass of the rounds. Boats armed with 2 cm/65 C/38 should aim to close the distance where they can overwhelm enemy boats with their firepower.

The primary belt choice for this gun should be the 20 mm HET belt since it contains the highest HE:AP ratio. Several 20 APT belts should also be taken to deal with armoured targets, primarily USSR armoured river patrol boats. For destroyers and cruisers armed with 2 cm/65 C/38, if the option is available, only take 20 mm HET, since the main guns can handle any armoured targets much better.