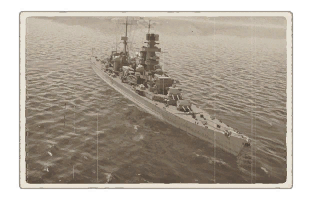 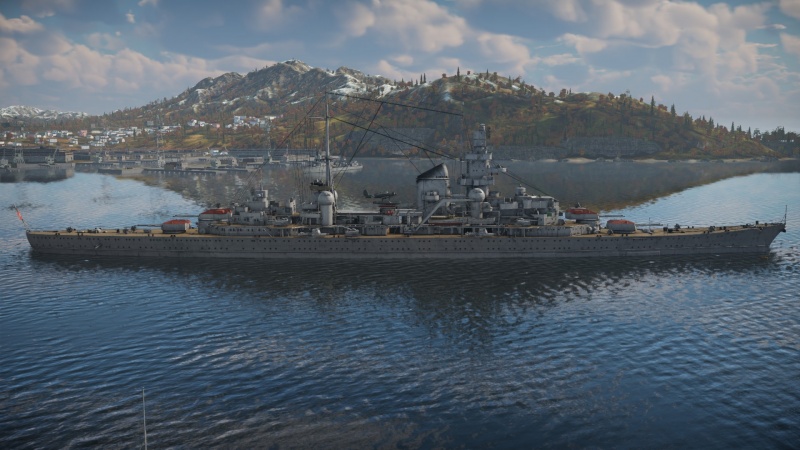 These cannons are great for taking out destroyers, as they have a good rate of fire and damage output. They also makes decent anti-air guns for high altitude bombers, though not particularly reliable they will definitely make bomb drops harder to pull off. Depending on which target you want to focus on you may load different shells: HE shells for destroyers and other smaller vessels, time-fused HE for anti-air duties if there are a lot of bombers in the sky, and APHE for well-armoured destroyers. You can take manual control of the secondary guns (alt+2 by default), making them more effective and giving you the ability to change the shells depending on the situation you are in. However, this will leave you vulnerable to other cruisers because you will be focusing most of your attention on other vehicles, so it may be better to level up your AI gunners and leave the job to them, while you focus on other cruisers or destroyers with your powerful main guns.

Prinz Eugen is covered with 40 mm and 20 mm AA guns, boasting an overall much more effective defence than her sister ship the Admiral Hipper. These guns easily protect the ship from close-range air assaults, while the 105 mm secondary guns will make sure high altitude bombers think twice before presenting themselves as an easy target, though they lack the proximity-fused shells sported by American and British heavy AA guns. It is best to aim the guns yourself if they are coming in from high altitude because most strategic bomber can't manoeuvre very well, making them easy to lead and aim at. The 40 mm and 20 mm autocannons are also great at wiping out torpedo boats and other small vessels. Since they often carry torpedoes that can one-shot or critically damage you, the wall of autocannon fire will make those torpedo boats think twice before rushing you, allowng you to focus more on the main target like other cruisers or destroyers. 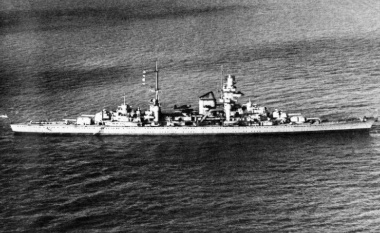 The Prinz Eugen underway, circa 1943.

The Prinz Eugen was the third and final member of the completed Admiral Hipper-class of heavy cruisers. Launched in August 1938, she saw extensive service during WWII, including in the sinking of HMS Hood. Following the cessation of hostilities, she was transferred to the Americans who used her as a test target in the Baker nuclear test. Due to the damage received during the tests, she capsized and sank before repairs could be made.[1]

The German Kriegsmarine began to design heavy cruisers in the early 1930s, despite the fact that the Treaty of Versailles banned them from building any ships of the type. Two designs were considered - a heavy cruiser with eight 203 mm (8-inch) guns in four double turrets, and a light cruiser with twelve 152 mm (6-inch) guns in four triple turrets, similar to those found on the Nürnberg. In the end, the heavier option was chosen; however, numerous design improvements resulted in the ship being significantly larger than originally intended.[1]

The final design displaced 14,247 tons and was 205 metres long, larger than the pocket battleship Admiral Graf Spee.[1] Armament was to consist of four dual 203 mm turrets, twelve 105 mm dual-purpose secondary guns and numerous anti-aircraft guns. The ship also carried 22 torpedoes in four triple launchers with 10 reloads, as well as three Arado Ar 196 scout planes.[1] The main armour belt was between 70-80 mm in thickness, and armour of up to 160 mm thickness could be found on the conning tower. The ship could reach 32.5 kts (60 km/h) and had a range of 5050 nautical miles at 15 kts.[1]

The German Kriegsmarine placed orders for a total of five Admiral Hipper-class heavy cruisers, to be known as Admiral Hipper, Blücher, Prinz Eugen, Seydlitz, and Lützow. Of these, the Seydlitz and Lützow would never be completed; Lützow would be sold to the Soviet Union and eventually scrapped, while Seydlitz was scuttled in 1945 after plans to convert her into an aircraft carrier failed. The contract for Prinz Eugen was placed in November of 1935. Following three years of construction, the ship was launched in August of 1938.[1]

The Prinz Eugen was then fitted out and underwent numerous sea trials, before being formally commissioned on August 1st 1940. The ship then conducted exercises with U-boats and the battleship Bismark, between September 1940 and April 1941.[2]

On May 18th, the Prinz Eugen accompanied the newly-commissioned Bismarck in Operation Rheinübung, or Exercise Rhine. After arriving in the Denmark Strait, the pair of ships engaged the battleship HMS Prince of Wales and battlecruiser Hood. During the engagement, Prinz Eugen was able to hit Hood once before a shot from Bismarck detonated the battlecruiser's magazine, resulting in her destruction with the loss of all but 3 of her crew. After the Hood sank, the Prinz Eugen hit the Prince of Wales three times, without suffering any damage herself.[2] 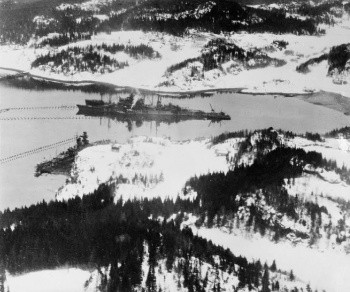 The Prinz Eugen moored in Norway; Admiral Scheer can be seen beside her.

Due to the Bismarck's damaged state, the two warships broke off soon after the engagement. Prinz Eugen sailed for Brest, where she was repaired. Bismarck was not so lucky, sinking after a long engagement with the battleships HMS Rodney and King George V. While the Prinz Eugen was docked at the Brest shipyard, she was bombed and heavily damaged, losing 60 crewmembers. Soon after, she participated in the "Channel Dash", escorting battlecruisers Scharnhorst and Gneisenau through the English Channel towards Kiel. She survived the dash without damage, having fired numerous 203 mm shells at pursuing British destroyers.[2]

In February of 1942, the Prinz Eugen departed for Norway with the pocket battleship Admiral Scheer. En-route, the submarine HMS Trident scored a torpedo hit on Prinz Eugen's stern. The hit caused severe damage to her stern and rudder, but she was still able to arrive at Trondheim, Norway under her own power. There, she joined Tirpitz and Admiral Scheer to perform attacks on Allied shipping convoys.[2]

In January of 1945, as the situation looked dire for Germany, the Prinz Eugen was dispatched to Norway once again, this time to evacuate refugees and provide support. Between 10 March and 4 April 1945, the Prinz Eugen expended almost 5,000 rounds of 203 mm ammo. She also lost 9 men as a result of a Russian rocket. On May 7th 1945, along with the surrender of mainland German forces, the Prinz Eugen and Nürnberg surrendered in Copenhagen, Denmark.[2] 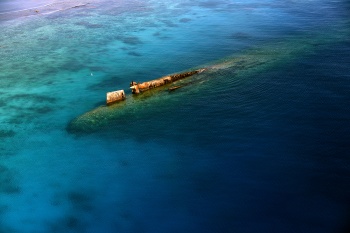 After the surrender, Prinz Eugen was handed to the British. Along with several other German and Japanese prize ships, she was handed over to the United States where she was commissioned as USS Prinz Eugen (IX-300). In early 1946, the Prinz Eugen traversed the Panama canal and sailed to Bikini Atoll, where she would carry out her final duty as a test vessel in the Operation Crossroads nuclear tests.[2]

On July 1st 1946, the 'Able' nuclear bomb was dropped on an array of vessels, including the Prinz Eugen. The ship, 1.1 km from the epicentre, suffered only minor damage. The second 'Baker' Nuclear test also failed to do significant damage. However, the shocks of two nuclear explosions caused leaks to form in the Prinz Eugen's hull. As well, the ship could not be repaired due to the high levels of radiation.[2] On December 22nd 1946, the Prinz Eugen developed a severe list, and capsized in Kwajalein Atoll. The ship was never salvaged due to the levels of radiation, but one of the ship's propellers was removed and installed near Kiel as a memorial for those who served in the Second World War.[2]

Prinz Eugen, named after an 18th-century Austrian general, was the third and last ship of the German Admiral Hipper-class heavy cruisers to see completion. Although being ready for commissioning in July 1940, an RAF air raid on Kiel lightly damaged the warship, causing its commissioning to be delayed until August.

Once repaired, Prinz Eugen returned to service in the late stages of WWII, acting initially as a training vessel for naval officers and providing artillery support for German ground units on the Eastern Front later on.

After the ceasefire in Europe, Prinz Eugen was handed over to the U.S. Navy as a war prize. After a detailed study of the ship’s design, the U.S. Navy assigned the warship to a nuclear weapons test at the Bikini Atoll in 1946. Having survived two nuclear blasts one aerial and one underwater Prinz Eugen with minor damage was towed to Enubuj Island which was a part of Kwajalein Atoll. There the cruiser was the target of another underwater nuclear explosion. The ship stayed afloat again but the damage caused, coupled with the lack of a concerted effort for survivability, resulted in it eventually capsizing and sinking.

Vessels of a similar role, configuration or era