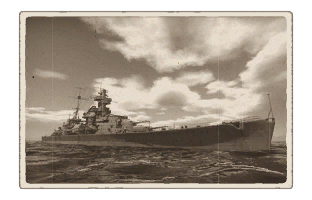 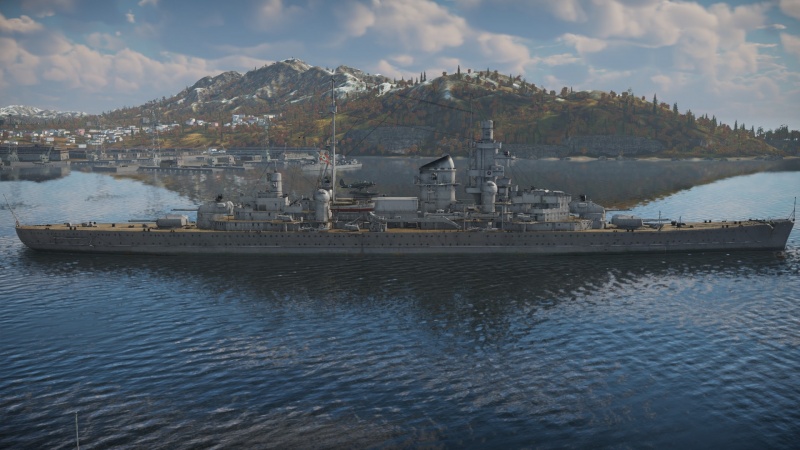 The Admiral Hipper-class, Admiral Hipper, 1942 is a rank V German heavy cruiser with a battle rating of 5.7 (AB/RB/SB). It was introduced in Update 1.91 "Night Vision".

The Admiral Hipper is one of the most well-protected ships in the game, featuring strong armour covering much of the ship in a turtleback scheme. She also possesses one of the largest crew counts in the game. As a result, against more wild, undirected fire, the Admiral Hipper is extremely resilient. However, she possesses a few fatal and well-known weak spots: both frontal and rear magazines are massive and very prone to detonate when hit even by smaller 6-inch shells. As a result, it is best to stick to long range-engagements and frequently change your heading to prevent the enemy from precisely targeting it while making full use of your extremely high-penetrating shells.

Located amidships is a single catapult for an Arado Ar 196 scout plane which provides unique offensive and defensive abilities, expanding tactical options. Ship-launched scout planes fly just like regular tree units, but lack munition choices and cockpit views. Alongside the typical abilities of strafing, dropping 2 x 50 kg bombs, and capping zones, the Ar 196 and other scout planes have the added ability to lay down smoke cover (up to 3 times). It is essentially the event aircraft except with smoke generators, so it will be a familiar unit for those who have the event version. Captains will be wise to remember to utilise the aircraft and consider when best to use it, for example to cap a point early or late in the match, to drop a smoke screen to stymie enemy bombardment and repair, to attack enemy units directly, or perhaps something completely new!

The Admiral Hipper is an immensely powerful heavy cruiser which shows very few signs of weakness. Like the other German cruisers, it's exceptionally strong, with great anti-torpedo protection and turtle back armour, giving it fantastic waterline armour. This, combined with a huge crew count, means the Hipper needs to take a huge amount of punishment to be sunk. The Hipper's main armament - eight 8-inch guns in dual turrets - is also very effective, with a 12-second reload and stunning armour penetration and muzzle velocity (enough in some cases to penetrate even battleship armour). It also boasts a strong secondary armament, a phenomenal anti-aircraft suite at both close and long range, and good torpedoes. The Hipper should be played as a long range brawler, able to dish it out and take damage from other heavy cruisers, while also combatting enemy aircraft with ease.

The main weakness for the Hipper comes from its status - everyone knows how dangerous it is. Most skilled players will know to target this ship first, and while the armour is good, it isn't enough to save it from other eight-inch guns at close range, or battleship guns at any range. Stay on the move, use cover, and keep an eye out for anything with guns bigger than yours, and you should stay alive. In the meantime, use your accurate guns to punish other cruisers from long range, and even battleships if you can flank them.

Following the signing of the Anglo-German Naval Agreement in June 1935, Germany was permitted to build, among other things, heavy cruisers up to a total displacement of 50,000 tons. The previously developed Admiral Hipper-class heavy cruiser design was chosen for construction, with five ships being initially planned to be built.

The five ordered ships of the Admiral Hipper-class were laid down between July 1935 - August 1937. However, only the first three were actually fully constructed and commissioned into service between 1939 - 1940. The fourth ship - Seydlitz - was scuttled in 1945 still being incomplete (as a conversion into an aircraft carrier), while the fifth ship - Lützow - was also sold incomplete to the USSR in February 1940.

Admiral Hipper, named after an imperial German admiral, was the first ship of the class to see completion, being commissioned into service in April 1939. After passing sea trials, Admiral Hipper was assigned to her first combat mission - Operation Weserübung - the invasion of Denmark and Norway, where it took part in a battle with the British destroyer Glowworm and also participated in the sinking of the trawler Juniper (930 tons) and the military transport Orama (19,000 registered tons). Subsequently, Admiral Hipper steamed out into the Atlantic to intercept allied shipping in December 1940, but without significant success. The first campaign wasn't particularly successful, but during the second campaign in January and February of 1941, the Admiral Hipper attacked SLS-64, an unprotected convoy - this attack on ship count alone, was the most effective from both world wars.

Admiral Hipper was then transferred to Norway, where it took part in raids against the arctic convoys headed for the Soviet Union. As part of an operational group, it took part in Operation Rösselsprung (Knight's move) which, although not a success, resulted in the almost total destruction of the allied PQ-17 convoy by German submarines and aircraft. In December of 1942, during Operation Regenbogen (Rainbow) a battle took place in the Barents Sea which was unofficially labelled as "New Year's Battle" or "New Year's Shame" the ship was damaged and sent back to Germany for repair. The failure of the operation led to a historical decision by Hitler to order the scrapping of all large warships. Admiral Hipper was transferred to the reserves and at the beginning of 1945, arrived in Kiel where it was damaged during allied air strikes in May of the same year. The defenders on the partially disarmed ship showed no enthusiasm for its survival and as a result, the ship burned out and sank to the dock seabed. After the war, the ship was once again raised and taken apart for scrap up to 1952.