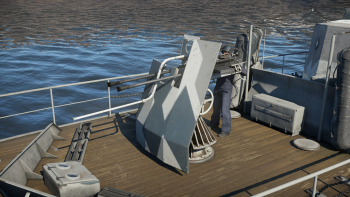 The 2 cm/65 Flakzwilling 38 is a German WWII light naval twin anti-aircraft cannon mount found on many motor torpedo boats, minesweepers, destroyers, and cruisers in the German naval tech tree, either with or without a gunshield. The Flakzwilling 38 is a twin mount of 2 cm/65 C/38 (20 mm). A quadruple mount variant also exists, called 2 cm/65 Flakvierling 38 (20 mm).

The 2 cm/65 Flakzwilling 38 has a very large TNT equivalent explosive mass compared to other guns of similar calibre. With its great rate of fire and high-damaging rounds, and the fact that it consists of two guns, Flakzwilling 38 can quickly destroy enemy boats and still have ammunition left to spare.

However, the Flakzwilling 38 is held back by its effective range of approximately 2.00 km using the 20 mm HET belt. This can be slightly increased to approximately 2.30 km using the 20 mm APT belt, although even so, hitting moving targets at such ranges can be difficult. Boats armed with Flakzwilling 38 should instead aim to close the distance and overwhelm enemy boats with their firepower.

Also keep in mind that, because of the rate of fire and amount of guns, Flakzwilling 38 can run out of ammunition on certain boats. It's always a good idea to practice conserving ammunition, even disabling the AI gunners if necessary. On larger ships though, this isn't much of an issue.

The effective range of the Flakzwilling 38 is approximately 2.00 km with the 20 mm HET belt, though if using the 20 mm APT belt, the effect range can be increased to roughly 2.30 km. Even so, hitting moving targets at such ranges can be difficult because of the relatively low muzzle velocity and the small mass of the rounds. Boats armed with Flakzwilling 38 should aim to close the distance where they can overwhelm enemy boats with their firepower.

Development began in 1938 for a replacement for the Flak 30 an army version of the 2 cm/65 C/30 after issues arose in its slow rate of fire and small ammunition magazine size. Rheinmetall began production of the new gun, Flak 38, in 1939, with it entering service the same year. In 1940, a naval version, 2 cm/65 C/38, entered production and service in the Kriegsmarine, where it would replace the older 2 cm/65 C/30.