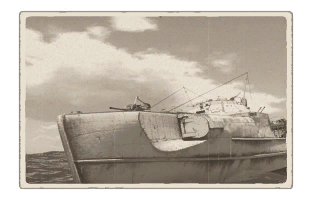 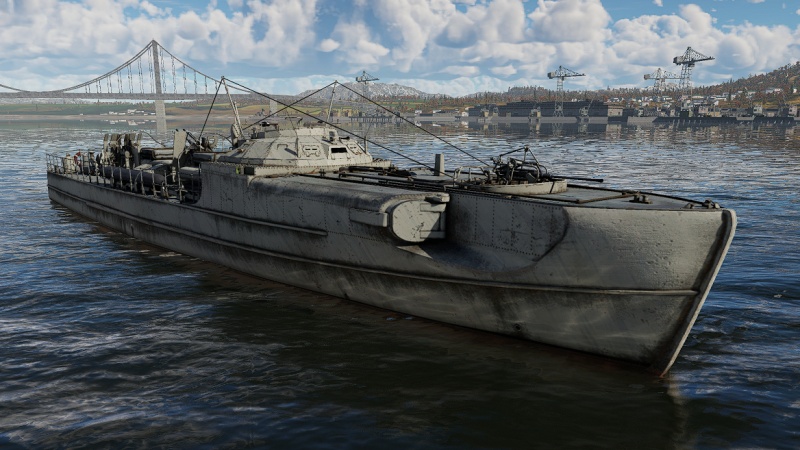 The S-100 class was an improvement of a preceding S-38 class by installing a more powerful engine and adding gun shields to protect gunners from shrapnel. S-100 was sunk while anchored in Le Havre harbour, France on 15th June 1944.

The S-100, like most low tier ships, has limited armour protection. The bridge is protected by 12 mm of hardened armour, and the two rear turrets are similarly defended. None of the other components of the ship, such as the engines and fuel tanks, are protected.

Despite its size,the S-100 is a fast and manoeuvrable at most speeds, making it an easy ship to control and play. With three engines powering the ship, the acceleration is very good, and with a bit of practice, the S-100 is able to accelerate even during turns. The ship itself does not bleed speed very much when performing hard turns.

The usual route of researching modules should be taken: Tool Set and Fire Protection System as first two vital modules. The next module to be researched that can aid the captain of a S-100 is smokescreen, helping evade enemy fire and launch torpedoes while withdrawing back into the cover of the smoke.

The S-100 is armed with three 20 mm cannons. The single 2 cm/65 C/38 automatic cannon is located on the bow with a very limited forward firing angle. Due to the size of ship, the vertical guidance of only -5° makes it unable to fire in front of the ship unless the target is at considerable distance. The second gun is a dual mount 2 cm/65 Flakzwilling 38 automatic cannon located amidship with a 8 mm thick hardened armour plate protecting the crew from machine gun rounds and shrapnels. The gun can be fired effectively only when utilizing it broadside and leaving the vessel vulnerable to enemy fire. Like the bow mounted gun, it has a limited vertical guidance of only -5°, because of the railing around the ship.

S-100 is armed with a single 3.7 cm FlaK located at the stern, it is protected by a gun shield made from 12 mm thick hardened armour plate. With addition of the ability to use both secondary and primary guns with a single trigger, this gun became the main source of damage against enemies due to being more powerful over distance when compared to 20 mm autocannons. Unfortunately it suffer from poor guidance caused by the railing around the ship like the 20 mm dual mounted cannon. Same tactics should be used as with the 20 mm.

The torpedo tubes are fixed to the hull of the ship, so torpedoes must be aimed by changing the direction of the vessel. With a base speed of 81 km/h, a range of 6 km and a payload of 358.4 kg TNTeq, the 533 mm G7a torpedoes sport a large explosive mass. When upgraded with a torpedo mode, the speed decreases to 56 km/h while boosting the range to 14 km.

The S-100 shares the same hull and playstyle as the S-38b. The key differences are the 3.7 cm auxiliary weapon and the limited AA firing angle. Although it's tempting to, turning broadside to use the centre-mounted dual cannons is ill-advised in most cases, as the hull is fragile. Using speed to deliver surprise attacks and flanking lone enemies is the way to go, but never attack a group when outnumbered. Captains may find the S-100 an effective destroyer hunter with this ship's high speed and effective torpedoes.