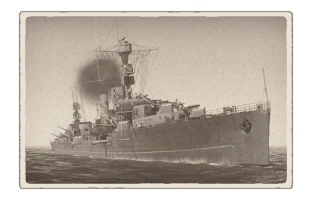 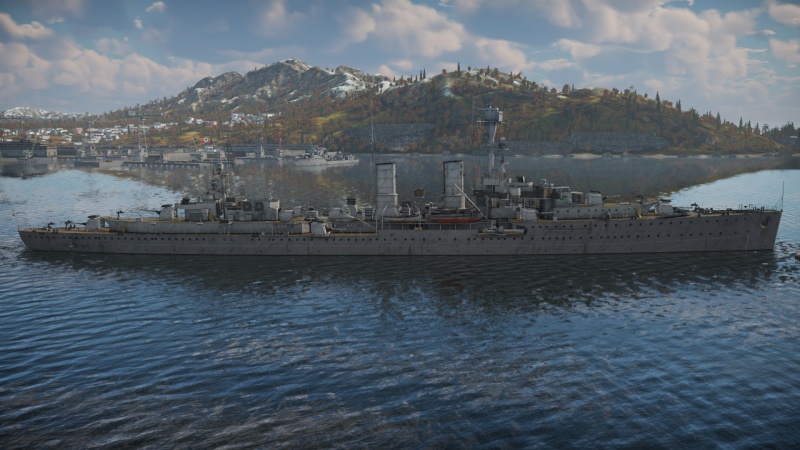 The Emden had very good survivability and the perfect amount of guns coupled with decent reload times and firepower. Together, this means you can output a lot of damage in a short period of time against other ships. The "turtleback" armour on this ship is what makes it special, even though it may not appear to have the best armour, its 50 mm layer along with another highly sloped 40 mm solid armour layer behind it, makes it extremely difficult to sink the light cruiser.

When stock, the Emden is noticeably sluggish to move around, with a top speed of only 47 km/h (AB/RB) and very poor traverse speed. After getting repair kits and FPE, rudder replacement should be considered as it helps the Emden be much more nimble.

The Emden utilizes eight 15 cm cannons, the same armament found on Type 1936A (Mob), each mounted on a single gun turret. The placements of the guns allowed it to fire four guns from the bow-on and slight angling position. As a light cruiser, the Emden gains access to a powerful APCBC to deal with heavier targets.

Secondary armament consisted of three 10.5 cm cannons, these cannons is moderately useful at close range against destroyers and PT boats. It has access to a time fuze shell to improve the ship's anti-air capabilities. However, due to low ammunition count, it is advised to manage your AI gunners to not waste it on any targets you can deal with by yourself.

The Emden possess some of the most powerful anti-aircraft armament at its rank. With two Bofors autocannons and twenty 20 mm FlaK cannons placed all over the ship. Any aircraft that were approaching the Emden will be greeted with a bullet storm of large and small calibres. This AA armament is also very useful for fending off PT boats that might come close to it, although it is always recommended to man the gun yourself when the enemy is too close.

The Emden is unusual among light cruisers for having wonderful armour. While the initial row of belt armour is only 50 mm thick, this is backed up by another layer of 40 mm armour in a turtleback layout that gives this ship great anti-torpedo protection, and protects ammo stowage from enemy shells. The guns on the Emden are also good, with the 150 mm cannons doing good damage to enemy cruisers and with good shell velocity. While the rate of fire is good, it falls off once the first stage of 10 rounds is depleted. Also, while you have a lot of guns, they're spread out and rather inaccurate. The broadside is only 6 guns, and the dispersion is pretty poor. The Emden also boasts good AA protection, especially at close range, and its torpedoes have a nasty bite, with good damage and top speed.

The Emden is a slow ship, doing just 47 km/h when stock, which can feel awfully slow after the very fast destroyers that precede it. Also, while the armour protection is great, the crew size is not. Flooding and fires, if they're not quickly brought under control, can be disastrous for an Emden. Combined with the fairly weak deck armour, this makes this ship particularly vulnerable to aircraft, though your AA guns should reduce this risk somewhat.

Due to the country's dire economical state, the tactical technical specifications of the new ship ended up being way below those that Germany was allowed to implement in the project. In essence, Emden was obsolete from the construction stage. However, this light cruiser ended up becoming the most upgradable ship of the German fleet. During the 1926-1945 period, extensive work was performed on the cruiser: the coal-fired boilers were replaced with oil-fired ones, new 533 mm torpedo tubes were fitted onto ship, the anti-air armament was significantly improved, the obsolete 150 mm armament of the kaiser era were substituted with more powerful alternatives, and the radar system became subject to numerous upgrades. The cruiser was involved in a lot of adventures during her service time before the start of the war – with eight long-distance cruises under her belt (pun intended), Emden had practically been in every corner of the world. During the Second World War, Emden was primarily used as a training ship and a military communications centre. In 1945, the Emden light cruiser was fatally damaged by a British air dropped bomb and subsequently sunk.