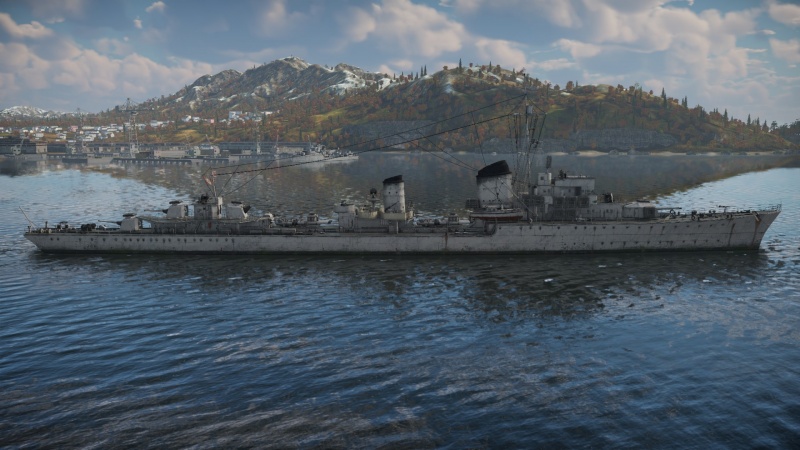 The Z32 offers very little additional protection except the basic hull with 16 mm of steel armour and a superstructure with 8 mm of steel armour. The gun shields on the single 15 cm mounts are 12.7 mm thick and the gun shields on the 20 mm Flakvierlings measure 8 mm of armour, therefore only offering protection from small calibre machine gun fire.

A small difference, however, is the slightly larger crew complement with 343 men, even surpassing the complement of the Z22 Anton Schmitt with 323 crew, and making this the 3rd highest destroyer crew count after the USS Sumner and the Leningrad.

A larger gun calibre whilst retaining the same number of guns as on the regular Type 1936 results in a displacement of 3,597 tons and a speed of around 68 km/h, making the ship slightly slower than its predecessors, although hardly noticeable.

The main armament of the Z32 comes in the form of 5 powerful 15 cm/48 KC/36 cannons, in 3 single mounts aft and one twin mount at the front. The large calibre of these cruiser guns result in a rather slow reload of 7.5 seconds and therefore a maximum of 8 rounds per minute. This however is compensated by the large amount of explosive filler and shrapnel the shells release on impact, as well as the noticeably better muzzle velocity retention, giving a much easier time aiming at longer ranges. 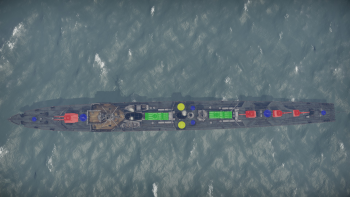 The HE shell has a TNT equivalent of 3.91 kg and a muzzle velocity of 835 m/s, making it a great choice for medium ranges against destroyers of any kind.

The second shell type, a semi-armour piercing capped shell, has good penetration, a TNT equivalent of 3.32 kg and a muzzle velocity of 835 m/s. Furthermore, this is the only destroyer shell able to reliably threaten a large portion of cruisers at ranges of 5,000 m. An accurate player will be able to ammorack most early interwar cruisers, or at least cripple them severely.

The secondary armament is provided with 2 twin 3.7 cm SK C/30 mounts, both in the middle of the ship, one port and one starboard. These have a fire rate of 30 round per minute and provide antishipping capabilities against smaller patrol vessels with HE and AP, as well as minor anti-air support with time fused HE shells.

The main anti-air defence consists of six 20 mm emplacements in total. Four in single mounts distributed in the front, aft and in the middle of the ship, and two quad mounts located in front of the bridge and between the second and third main gun. This gives the Type 1936A decent anti-air capabilities for close range encounters, although for longer ranges, this calibre is insufficient.

The Type 1936A features 2 quadruple torpedo mounts in the middle of the ship, attached in the centre for a full traverse to both sides, enabling a full broadside of 8 torpedoes.

The torpedoes are the standard 533 mm G7a torpedoes of the German navy, with a maximum speed of 81 km/h, a maximum travel distance of 14 km and an explosive warhead of 358.4 kg of TNT. Not particularly outstanding in any kind or form, but still useful for screening capture points or chokepoints and close range panic launching.

The Z32 is an excellent ship, boasting massive firepower. Due to its non-existent armour, good muzzle velocity, slow firing and slow traversing guns, the Type 1936A is best used on medium or long ranges, where evasive manoeuvres can be made and enemies have a harder time hitting you. Following this, the Type 1936A should not be in the first line of attack, it should be played more like a support, staying further away, and making use of its longer range weaponry. When engaging at close range, the insufficient rate of fire becomes apparent and multiple enemies from different directions can easily overwhelm the slow reacting destroyer, in these situations a precise shot in the ammorack can do the trick and is much more reliable than with smaller calibres. Furthermore, the large calibre is capable to overcome even the anti-fragmentation armour of American destroyers without losing much of your explosive power, and therefore countering those American vessels.

Having the semi-armour piercing (SAP) shell equipped gives the Type 1936A another, more unique role, namely the role of a cruiser killer, being one of the few destroyers to be able to do so. Since your destroyer is the definition of a glass cannon, even more when facing cruisers, it is important to stay concealed behind islands or simply by not shooting whilst closing in to a range of around 4-6 km. A few salvoes into the sides of the cruiser where the ammo is located is usually enough for most early interwar cruiser designs like the USS Trenton, the Krasny Kavkaz, or the Köln.