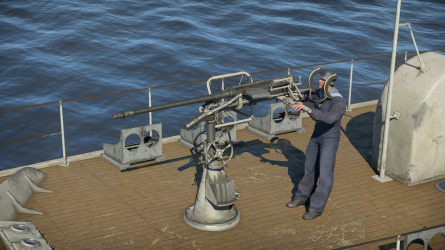 The 2 cm/65 C/30 is a German WWII light naval anti-aircraft cannon found on many motor torpedo boats, minesweepers, destroyers, and cruisers throughout the German naval tech tree. An army version, KwK30 (20 mm), can be found as the main armament of Pz.II C and Pz.II C (DAK), and an experimental version modified for aircraft usage, MG C/30L (20 mm), can be found mounted on He 112 A-0. An improved version, 2 cm/65 C/38 (20 mm), can also be found on many German naval vessels, with both guns often found on the same vessel.

With a very large TNT equivalent explosive mass compared to other guns of a similar calibre, the 2 cm/65 C/30 is an excellent weapon for destroying enemy patrol boats, especially in tier I. The only things that hold it back are its small magazine size and slow rate of fire. If firing with only one gun, despite the high damage of each hit, 20 rounds are often not enough to destroy enemy boats. Luckily, all boats armed with the 2 cm/65 C/30 either also have more than one, or also have the improved variant, 2 cm/65 C/38. Boats with C/30 as their main armament should angle to bring as many of them on target as possible, to guarantee that the enemy is destroyed before having to reload.

The effective range of the 2 cm/65 C/30 is approximately 2.00 km with the 20 mm HET belt, though if using the 20 mm APT belt, the effect range can be increased to roughly 2.30 km. Even so, hitting moving targets at such ranges can be difficult because of the relatively low muzzle velocity and the small mass of the rounds. Boats armed with 2 cm/65 C/30 should instead aim to close the distance where they can overwhelm enemy boats with their firepower.

The primary belt choice for this gun should be the 20 mm HET belt since it contains the highest HE:AP ratio. Several 20 APT belts should also be taken to deal with armoured targets, primarily USSR armoured river patrol boats. For destroyers and cruisers armed with 2 cm/65 C/30, if the option is available, only take 20 mm HET, since the main guns can handle any armoured targets much better.

Beginning in 1930, Rheinmetall began development on a new light anti-aircraft cannon for the Kriegsmarine, with the Solothurn ST-5 as a base. The new design, 2 cm/65 C/30, began production in 1934 and entered service the same year. It had a bore diameter of 20 mm, a barrel length of 1.300 m, and weighed 64 kg. The gun was recoil-operated and fully automatic, and it had an air-cooled, monobloc barrel design which could be easily removed and replaced when needed.

The 2 cm/65 C/30 could be mounted on a single mount L/30, totalling 420 kg in weight. On the L/30 mount, the gun was manually operated, and it could depress -11° and elevate +85°. Ammunition was loaded through the left side with 20-round magazines, and spent casings would be ejected out the right side into an awaiting bag. The gun had a cyclic rate of fire of 280 rounds per minute, but the small magazine size necessitated frequent stops to reload, putting the effective rate of fire to only around 120 rounds per minute. At the base of the L/30 mount was a small rack for five additional ammunition magazines. Two types of ammunition were available for the gun, HE and AP, the first of which weighed 0.134 kg and had a muzzle velocity of 835 m/s, and the latter, weighed 0.148 kg with a muzzle velocity of 800 m/s.

The 2 cm/65 C/30 was a successful design and saw widespread usage throughout Kriegsmarine as the standard light anti-aircraft cannon. However, the gun frequently jammed and was limited by its small ammunition magazine and slow rate of fire. In 1938, Rheinmetall addressed these issues with the 2 cm/65 C/38, which would replace the old 2 cm/65 C/30 where possible.