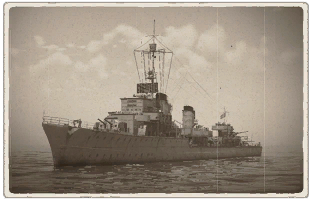 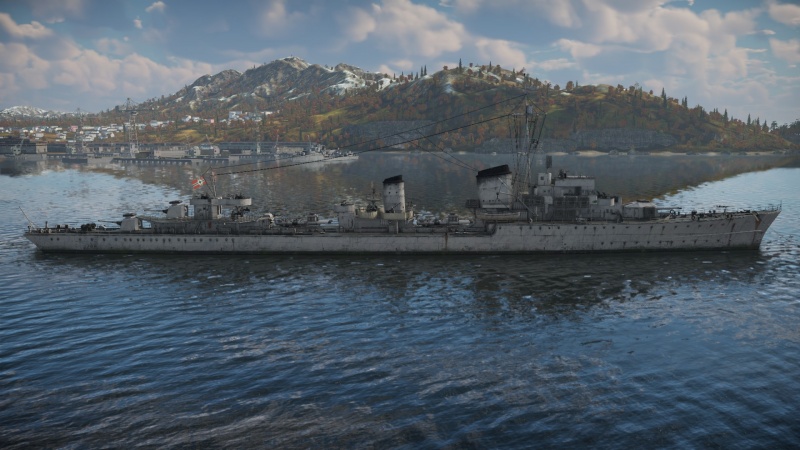 The Type 1936A, Z25, 1945 is a premium gift rank III German destroyer with a battle rating of 4.3 (AB/RB/SB). It was introduced during Update "Hot Tracks" as a reward for Battle Pass: Season II, "Steel Centurion".

The main armament of the Z25 comes in the form of 4 powerful 15 cm/48 KC/36 cannons, in 2 single mounts aft and one twin mount at the front. The large calibre of these cruiser guns result in a rather slow reload of 7.5 seconds (with ace crew) and therefore a maximum of 8 rounds per minute. This however is compensated by the large amount of explosive filler and shrapnel the shells release on impact, as well as the noticeably better muzzle velocity retention, giving a much easier time aiming at longer ranges.

The second shell type, a semi-armour piercing capped shell has good penetration, a TNT equivalent of 3.32 kg and a muzzle velocity of around 960 m/s, making this one of the fastest destroyer shells in the game. Furthermore, this is the only destroyer shell able to reliably threaten a large portion of cruisers at ranges of around 5,000 meters. An accurate player will be able to ammorack most early interwar cruisers, or at least cripple them severely. The last shell, an explosive round with time fuse, can be used against aircraft if aimed carefully.

The Z25 sacrifices one of the 15 cm cannon for extra aerial protection. Other than two twin 3.7 cm FlaK from the Type 1936A (Mob) that are placed at the place where the second 15 cm turret were once located, it also featured six single 3.7 cm FlaK mounts, four placed around the ship's second funnel and two on the aforementioned former turret mount. These have a fire rate of 30 round per minute and provide anti-ship capabilities against smaller patrol vessels and ship at close ranges with HE and AP, as well as good anti-air capabilities against low-ceiling planes.

In addition to the 37 mm guns, the Z25 also featured four extra 20 mm emplacements (sixteen in total) in the form of dual 2 cm FlaK mounts. All four of which were located the front. The two quadmounts located front of the bridge and between the (former) second and third main gun placement. This gives the Type 1936A an impressive anti-air capabilities for close range encounters, although for longer ranges, this calibre is insufficient.

Other than that, the Type 1936A also featured a single 2 cm/65 C/38 autocannon mount directly at the front of the first main turret, this gun is nearly identical to that of the 20 cm FlaK.

The Z25 is equipped with basic two quadruple 533 mm G7a torpedo launchers placed at the centre of the ship. This torpedo has a speed of 81 km/h and a maximum range of 6 km. It takes 50 m to arm the torpedo. On-board is 358.4 kg TNT which causes a significant blow. The range can be extended up to 13 km with torpedo mode modification.

The Z25 is essentially the Z32 that sacrifices one single 15 cm turret for more secondary and AA mounts. Although it has less broadside firepower than its tech tree counterpart. It still retains its function as an excellent ship boasting massive firepower bow-on.

Due to its non-existent armour, good muzzle velocity, slow firing and slow traversing guns, the Z25 is best used on medium or long ranges, where evasive manoeuvers can be made and enemies have a harder time hitting you. Following this, the Z25 should not be in the first line of attack, it should be played more like a support, staying further away, and making use of its longer range weaponry. When engaging at close range, the lack of firerate becomes apparent and multiple enemies from different directions can easily overwhelm the slow reacting destroyer, in these situations a precise shot in the ammorack can do the trick and is much more reliable than with smaller calibres. Furthermore, the large calibre is capable to overcome even the anti-fragmentation armour of American destroyers without losing much of your explosive power, and therefore countering those American vessels.

In exchange to one less main gun, Z25 is equipped with a lot of small calibre mounts (ten 37 mm secondary guns and seventeen 20 mm AA guns in total) placed all over the ship. These guns is very deadly against enemy ship at close range (as it can cripple the enemy ship by depleting their crew and occasionally set the enemy ship on fire), various PT boats, and enemy aircrafts. While the AI gunners is able to reliably hit the enemy ship, smaller targets such as PT boats and occasionally aircraft may requires manual aiming to destroy them. It is advised to use the HE belts for the 37 mm against these targets as it can deal a good amount of damage via fragmentation blast.

The Z25 destroyer of the Type 1936A class was laid down at the beginning of 1939 and launched a year later, soon joining the 8th destroyer flotilla along with other ships of the 1936A series. The destroyer began combat operations as part of the German Baltenflotte to protect Swedish ports from the hypothetical possibility of break through by ships of the Soviet Baltic Fleet from the besieged Leningrad. Shortly thereafter, the Z25 was active in hunting for Arctic convoys in the Barents and White Seas, where it converged with Soviet and British ships. In February 1942, she took part in the famous Operation Cerberus - a daring dash from France to Germany of two German battleships and a cruiser under the cover of a destroyer group along the channel between France and England. Under constant raids by British aircraft and destroyer attacks, the Z25 not only survived, but was not significantly damaged at all. After this brilliant operation, the destroyer returned North to intercept Allied Arctic convoys. After discovering problems with the power plant, the Z25 went to Germany for repairs. From the beginning of 1944 and until the end of the war, she continued to serve in the Baltic Sea, taking part in both combat and evacuation operations.

At the end of April 1945, the destroyer Z25 was decommissioned from service and after the war was transferred to France, where it received the name "Hoche". Here she served for more than 10 years and even underwent a major modernization, but by 1957 the exploitation of the German veteran was recognized as economically unprofitable and the ship was decommissioned soon after. The destroyer was finally scrapped in 1961.