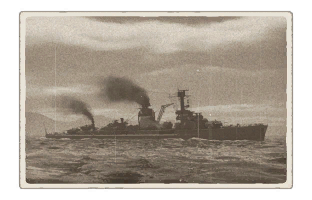 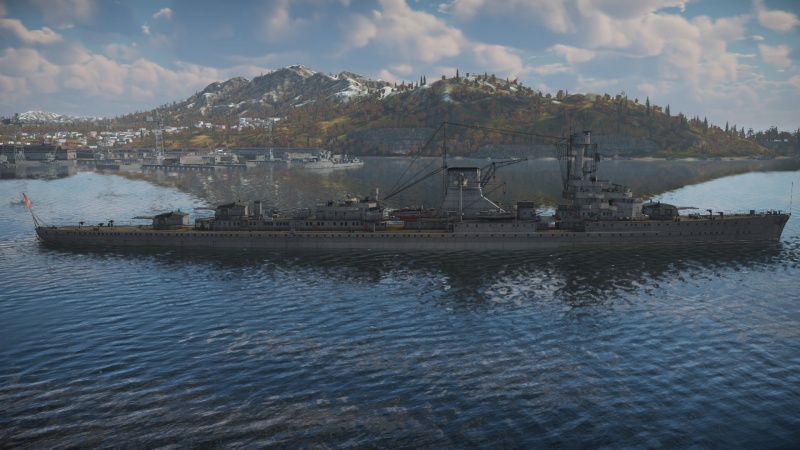 The Leipzig is a dangerous ship in the right hands, possessing good firepower and good protection. Replacing the meagre broadside of the Emden is the nine gun broadside of the Leipzig, in three triple-gunned turrets, giving this ship a huge increase in firepower and accuracy. An unusual aspect of the ship is the layout of the guns, with two of the three turrets being at the stern of the ship. While this does make the Leipzig very effective during a hostile retreat, it means you have to show broadside to bring a majority of your guns on target. The guns themselves are good, with a good first-stage fire rate and good shell velocity. Once the first stage is depleted, the reload slows to 10 seconds, which is poor for light cruiser guns, so make your shots count. The Leipzig also retains good AA protection, especially at close range.

The strongest aspect to the Leipzig is its "turtleback" armour scheme, which gives it fantastic belt armour and 200 kg of torpedo protection. This makes the Leipzig a menace for long range snipers, as well as being able to bear a lot of damage at close range. This, combined with its guns fantastic close-range damage potential, make this ship a fantastic brawler. Watch out for your lack of torpedoes, and try not to always show broadside. If needs be, point the rear of your ship at the target.

Leipzig was the lead ship of the two Leipzig-class cruisers, built as a follow-up to the Könisberg-class.[1] The ship carried a main armament of nine 15 cm SK C/25 guns, as well as two torpedo tubes and a variety of anti-aircraft defences. She was launched in 1929, and saw plenty of service including a visit to the UK and non-intervention patrols near spain. She was tasked with escort duties at the start of the Second World War, but was badly damaged by a Royal Navy submarine in 1941. She was repaired, and subsequently converted to a training ship. In 1944, she collided with the Prinz Eugen; the damage was so severe that she was never completely repaired. Used as a barracks ship following the end of the war, she was scuttled in 1946.

The Leipzig, being a further development of the Könisberg-class of light cruisers, inherited many characteristics of its predecessors. The ship was 177 metres long and displaced 8,380 tons full.[1] Powered by twin steam turbines, she could reach a maximum speed of 32 knots, and had an endurance of 10,550 km.[1] Main armament consisted of nine 15 cm SK C/25 naval guns in three triple turrets; one was located forward of the superstructure while the others were located in a superfiring arrangement in the rear.[1] The ship also initially carried four triple torpedo launchers, though all of them were removed during WWII. The ship's anti-aircraft armament was sparse, and wasn't refitted to the same extent as her sister ship Nürnberg.[1]

The Leipzig was laid down in 1928 at Kiel, and was launched in October of 1929. The ship was formally commissioned into the Kriegsmarine in late 1931.[1]

Following the outbreak of war, the Leipzig was one of the ships tasked with blocking the Polish navy from escaping; they were unsuccessful, and several destroyers and submarines managed to escape. Later on, she participated in mine-laying duties, and escorted the Scharnhorst and Gneisenau to the Baltic. On December 13th 1939, the Leipzig was torpedoed by HMS Salmon as she escorted a flotilla of destroyers through the Skagerrak. The torpedo did severe damage to the ship's central section and flooded it with 1,700 tons of water.[1] Her sister ship Nürnberg was also torpedoed. As a result, two destroyers were tasked with escorting the damaged cruisers back to port; on their trip home, one of the destroyers was torpedoed as well. The RAF also organized an air attack against the Leipzig and Nürnberg; however, the twenty Vickers Wellington bombers failed to do significant damage, and seven were shot down.

The Leipzig was decommissioned while under repair at Kiel and reclassified as a training ship.[2] In the years of 1942 and 1943, she mainly served training roles, though she also escorted several capital ships on various excursions. She became the flagship of the training fleet in 1942. In October of 1944, Leipzig had a serious collision with the heavy cruiser Prinz Eugen.[1] The collision almost cut Leipzig in half, did serious damage to the ship's engine compartment, and killed 39 crewmen. She was so badly damaged that no full repairs were ever made, due to the ever-worsening economic situation in Nazi Germany. The ship only received enough repairs to keep her afloat.

In 1945, Leipzig provided fire support to German forces defending against the advancing Soviets. During this time, she was repeatedly attacked by sea and by air. She also moved refugees, but was limited to a speed of just 6 knots (11 km/h) due to the damage sustained during the Prinz Eugen collision. Following the end of hostilities, she was used by the newly-formed German Mine Sweeping Administration as a barracks ship; eventually, in 1946, she was towed out to sea with a load of unused WWII-era gas shells and scuttled.[2]