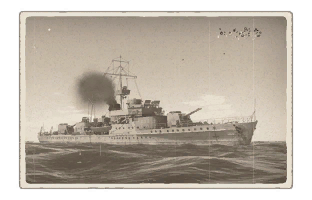 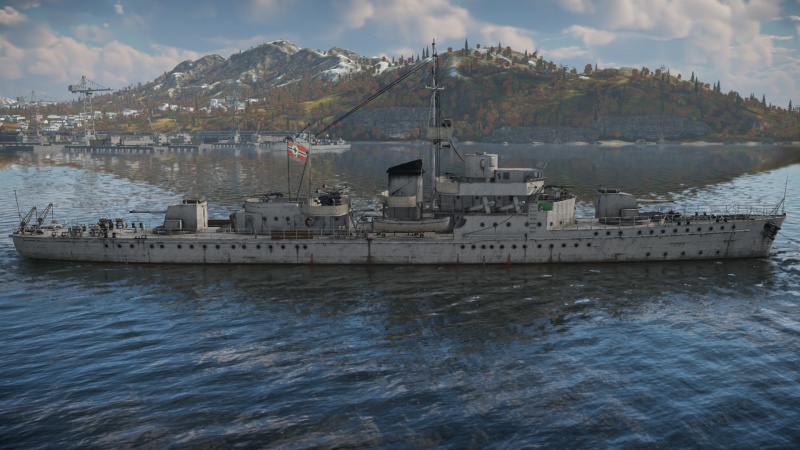 As the K2 is a frigate, it's important to note that it is not fast with a top speed of 34 km/h (AB:47 km/h) which makes it as fast as a Killer whale. Indeed, the K2, could be compared to a Killer whale! It's not very fast, it can't manoeuvre very fast, it can't evade torpedoes at close range. However, it's very strong, with armour plates providing up to 60 mm of protection, and its Herculean size compared to other gunboats, it makes it look and feel very opposing. It packs a very almighty bite! With its two turrets carrying 2 x 120 mm L45 cannons, 2 x four-barrel Flakvierling 38 automatic cannons, 2 x 2 cm C/38 (20 mm) automatic cannons and 2 x 3.7 cm (37 mm) SK C/30 automatic cannons.

The storage for its ammunition is stored below the waterline, they are also encased by the fuel tanks which wrap around the sides behind the 60 mm thick armour plates, making torpedo strikes less likely to sink the ship, however, it is not impossible to be sunk by a single well-placed strike. When playing this Herculean motorboat, sail towards the capture zone, do not head out to sea like a lone killer whale, because the K2 will be sunk, by enemy destroyers which prey on large slow ships, like this, for easy targets.

The manoeuvrability of the ship is like a killer whale, it's good, but it's not the best - it can make short sudden movements to dodge torpedoes only if they are coming towards the stern of the ship. Turning requires a large area to be completed, it's one of these ships where it's better suited to go in a straight line and stay in capture zones.

The primary armament consists of four 120 mm L45 cannons mounted in two turrets, one front, and one rear. The turrets can turn 360 degrees, making changing broadsides easier. The shell selection is not a selection. You only have at your disposal a high-explosive round with 2.7 kg of TNT. The guns traverse at an average rate, but have a slow reload.

The secondary armament consists of four 3.7 cm cannons, in two turrets, one front and one rear. They reload fast, at 30 rounds per minute. In terms of shells, you get a HE and an APCBC. APCBC should always be used, as it has both a higher explosive power, and higher penetration power. It is possible to hit and detonate the enemy ammo racks with these, especially the unprotected ammoracks most ships have for their rear turrets, above the waterline.

The AA guns are very good for a ship of it's size and tier. A total of 12 2 cm autocannons and 2 13.2 machineguns will provide very effective cover from enemy planes.

There are depth charges and grenade launchers, which are somewhat needless, but provide a hazard of being detonated by enemy shots. It is best to not carry them.

The K2 excels in close-range combat, its L45 cannons rip apart enemy ships with well-placed shots, smaller lighter ships can easily be knocked out with a single hit directly on them. The Herculean size and armour of the ship allows it to dish out blows and take some more, without much damage.

Critical hits will most likely cripple the ship, with areas not well armoured such as under and to the left of the stern, and the bow turret. HE rounds could cause the ammunition to detonate. The armour belt also extends just above the waterline, which means that sailors can be knocked out easily with AP or HE rounds. Along with this, if the turrets are knocked out, you'll most likely be easy picking for torpedo boats and other warships.

Another thing to keep in mind when playing the K2 is to avoid long-range engagements, as the poor manoeuvrability and low speed can make you get picked off early in the match. This is why it's important to stay focused on what threats are appearing in the combat zone. Some notable threats to it are bombers, destroyers, torpedo boats and light cruisers. To stay combat effective for as long as possible, be sure to make use of the game's A.I. system to make the AA independent so that it can engage small surface ships and air targets.

The Kriegsmarine decided to continue construction and to complete all three of the captured warships for use in the German war effort. Thus, the K-1, K-2 and K-3 were all subsequently completed by 1940/41 and were put into commission with the German navy by 1942. The three gunboats primarily saw service in Norwegian and German waters, performing patrols and other low-profile missions. K-1, the lead ship of the class, was sunk right at the end of WW2 in 1945 off the coast of Denmark. The К-2's back of the deck was damaged by a torpedo during another air attack of the allies. The vessel had been towed back to Germany but was never repaired till the end of the war. After the war she was towed to the Netherlands where it sunk for unknown reasons, it was raised from the seabed and scrapped in 1946.K-3 was the sole survivor of the class, being recommissioned into Dutch service after WW2 under the name "Van Speijk". K-3 remained in Dutch service until 1960, after which she was sold for scrap.