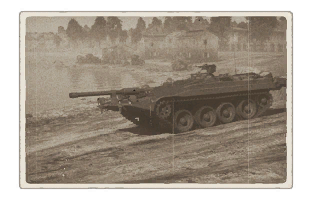 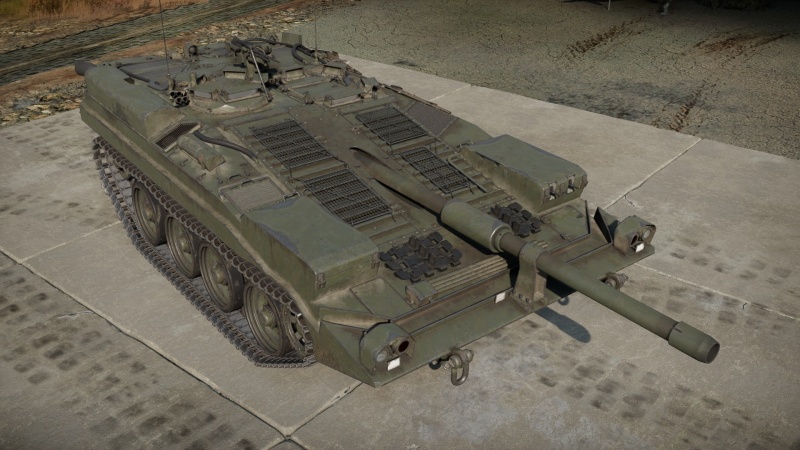 The Stridsvagn 103A is a rank V Swedish medium tank with a battle rating of 7.7 (AB/RB/SB). It was introduced in Update 1.97 "Viking Fury". It is a first unique tank in the Swedish tree which is a MBT, although by its appearance it would seem to instead be a tank destroyer. It is also known as S-Tank or Door Stop.

With a superbly sloped front hull armour, incoming kinetic rounds are prone to harmlessly bounce off, though chemical rounds will typically do some damage. Side, rear and top armour of the vehicle are weak, most aircraft can penetrate the roof, especially if they have 20 mm rounds or larger. With a total of three crew members, survivability after taking hits tend to be slim. However, the Strv 103 series are the only tanks that can operate with only one crew member! A major drawback is without transmission/engine you can no longer manoeuvre the hull to aim left or right. 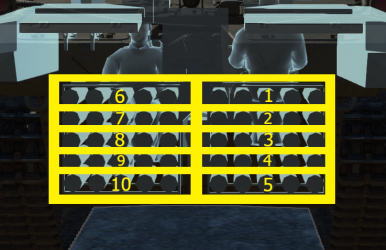 Ammo racks of the Strv 103A

The Strv 103A is an amazing tank to take in defensive positions and snipe with. Although it's mainly used for the sniping role, it can also do close quarters combat quite well if one needs to push out to a capture point. Due to the armour design of the Strv 103, surviving conventional shells that can be found on the early Cold War-era Soviet tanks is easy. The only challenges with the tank is to learn key positions to lock down with the rapid firing 105 mm L7-derived cannon and learning the shooting mechanics of hull-aim. It is important to stay on flat ground when playing this tank, as slopes can cause issues with the hull-aim.

While the Strv 103 can easily hold its own against conventional shells, against chemical and more modern kinetic rounds it starts to lose its points. HEAT-FS shells can easily penetrate the frontal armour, going through both the armour and engine, knocking out the crew behind it (this gets remedied with the later 103C, which has slat armour at the front to prematurely detonate the shell). In full uptiers, it's also highly likely to get shot at by APFSDS shells, which ignore the armour completely. That's why when facing these vehicles, one should take full utility of the smoke launchers and smoke rounds to create a quick escape out and avoid getting shot at.

If the tank does get shot at, the survivability is quite high due to the crew all being located behind the transmission and the engine. And since the tank can be operated by only one crew member, the tank is mostly only destroyed by being set afire by the fuel tank and engine in the front of the tank.

After 6 months of trial with the Strv 103-0 and the goal settings for requirements that the tank needed to pass were done in 1963 it was not till Autumn 1964 that the first order for the Strv 103 came in to AB Bofors. 1967 the Strv 103A started to deliver to the army, a total of 70 Strv 103As were ordered to the army as the first series production. Strv 103A had a 300hk powered gasturbine that during delivery proved to be not quite effective and would be required a change in the upcoming version of the Strv 103. Directly when the S tank got delivered instructor courses began and it was not till 1968 that the first conscripts go the education on the Strv 103 "S" systems.

MBTs with Best Armor discusses the Strv 103A at 02:54 - War Thunder Official Channel