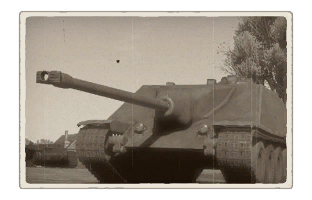 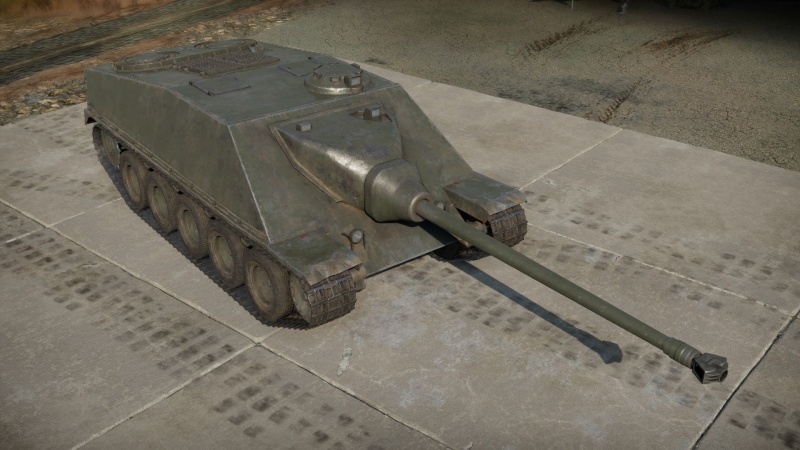 The Canon d'assaut Lorraine de 100 mm (100 mm Lorraine assault gun), or abbreviated CA Lorraine, is a rank IV French tank destroyer with a battle rating of 6.0 (AB) and 6.3 (RB/SB). It was introduced in Update 1.75 "La Résistance". It presents a very classic TD design: Casemate gun platform and powerful armament. While lacking in terms of armour, it compensates with both excellent mobility and a very strong gun.

The CA Lorraine is an intermediate between a SU-85 and a lowered Jagdpanther. It is distinguishable for having rubber road wheels instead of metal ones, two huge fans atop the engine deck (much like the German Jagdpanther), a very pointy gun mantlet pointing outwards from the casemate and quite a large, rounded commander's cupola. In some ways, it is quite similar to the fearsome AMX 50 Foch, and this can scare away some cowardly foes.

Its sloped, medium thickness frontal armour will not protect you from anything bigger than SPAA shots (some may even get through in close quarters) but it is certainly sufficient for what it is designed to do: protecting from stray bullets in long range engagements. Side and top armour are also quite weak, so don't expect to survive any kind of surprise coming from side or top. Still, this tank has 5 crew members, which can often save it from a quick destruction.

If anyone thought the Lorraine 40t was a sprinter, this is even better. The CA Lorraine is fast. Not only in forward motion is it fast, it can reverse at a decent, constant, -16 km/h and it has ability to neutral steer, these enable fast reaction to quickly changing battlefield odds such as flanking maneuvers or enemy breakthrough. An experienced player can take clear advantage over its foes by achieving good placement and this tank is the perfect tool for this task.

This gun platform uses the usual French rank IV 100 mm SA47 L/58 cannon with a twist: it has no autoloader mechanism, hence making reload time twice as long. However, at battle rating 6.3, the gun packs an awesome 300 mm of penetration that ensures it can punch well above its own rank. The large shell caliber also means it can create quite a lot of fragments inside a tank, making the lack of explosive filler not so bad, as long as you land a good hit.

Keep that in mind as your foes get closer and closer to you: these precious 15 seconds of reload time are the perfect time to intent a frontal attack, even more so since you don't have automatic firepower of any form. Always have a backup plan, in case your single shot doesn't fully disable your target. 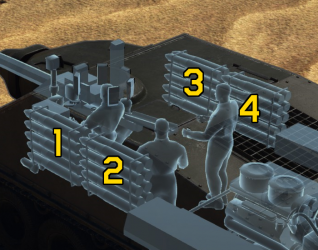 Ammo racks of the CA Lorraine

Shells are modeled individually and disappear after having been shot or loaded.

The CA Lorraine can be used in different ways, but in all cases it will be relying on its speed. The CA Lorraine is one of the most agile tanks at its battle rating in terms of max speed, cross country speed, turn time, neutral steering and reverse. The CA Lorraine should not be used as an assault tank (often confused with the AMX-50 Foch). Use your speed as your main advantage.

The Lorraine has a big disadvantage when it comes to urban combat, it is turretless, meaning the tank will have to turn in order to aim at a certain place. This also makes crossing corners harder as the lack of turret reduces where your gun will be aiming as well as making an side firing angle (angle between your gun and your hull) narrower, forcing you to push almost frontally instead of doing sidescrapping. The mobility of the CA Lorraine makes it formidable when it comes to flanking as it is able to "Hit N' Run" and destroy or incapacitate enemies with relative speed. Be aware of your reload rate as you do not have autoloader (compared to Lorraine 40t which uses the same gun, the CA Lorraine reloads in 15.6s stock without upgrades and Lorraine 40t in 4.0s regardless the crew or upgrades), this makes a huge disadvantage as you will be vulnerable after each shot, make each shot count. Aim for gunner, cannon breech or ammunition to disable and destroy tanks as an error will cost your life. Having only 50 mm of frontal armour makes the Lorraine only capable of withstanding some SPAA fire (Wirbelwind, M42, etc) but will be penetrated by all tank guns at its BR and even SPAA at point blank range.

The Lorraine is a pretty decent sniper at its BR but this is by far one of the best combat roles the Lorraine can have. The 6x sight and the high muzzle velocity will make sniping easier than with other tanks at its BR. It should be noted that the CA Lorraine will not be able to withstand many frontal attacks even at range (PzGr 39 fired from KwK36, 42, 43 and 48 will penetrate the upper frontal plate with ease). Always stay on the move when possible. Fire and move. This is to make each attack unpredictable as people are prompt of revenge killing you with a tank or with an aircraft, always stay aware of your surroundings and stay away from suspicious locations enemies can look forward to detect and engage you.

In the late 1940s, the French Army was looking to replace the medium tanks Panther and ARL 44 that were becoming obsolete with a new 50t medium tank. Other concepts were explored in parallel to the 50t medium tank: a 25t light tank and a 25t light tank destroyer. The French company Lorraine was tasked with the tank destroyer bid and proposed the Canon d'Assaut Lorraine. Clearly inspired from the layout of the Jagdpanzer IV and the Jagdpanther, the CA Lorraine was to assume the same support role on the battlefield along light and medium tanks.

A 100 mm SA 47 L/58 gun was chosen to equip on the tank and the armour was kept to a mimimum to save weight and increase mobility. The vehicle featured pneumatic tires in place of road wheels. The upsides of such tires were the possibility to still move the tank destroyer when detracked, a weight reduction and thus a reduced ground pressure and an increased top speed. A prototype was built between 1950 and 1952 but the project was terminated in 1953. The tank destroyer weighed 25 tons, carried 40 shells and could reach 60 km/h. With the experience from the Korean war, the concept of dedicated tank destroyers was gradually abandoned in NATO armies to focus on armoured divisions composed uniquely of main battle tanks.

The CA Lorraine never saw either service or combat action with the French Army. Its chassis and many other parts were later reused in the development of the Lorraine 40t as well as in other projects.