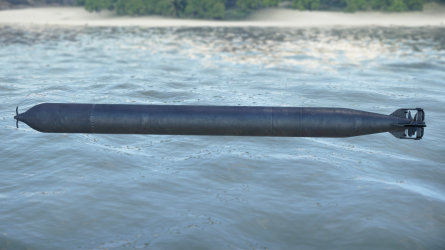 The 533 mm G7a is a standard-issued torpedo of Germany's Kriegsmarine. The G7a and its variants were widely used throughout the World War II and can be found on almost every Kriegsmarine bluewater ships in the game.

The G7a's warhead is able to hull break any destroyer-sized ship with a single hit, while it can cause considerable damage to cruisers depending on where it hits.

The G7a is a basic run-off-the-mill torpedo with decent overall performance. The warhead of ~360 kg can pose a threat against most of the targets short of some capital ships. However, it suffers from its polar opposite performances with and without the "Torpedo Mode" modification installed, which can cause it to be less effective in certain maps.

Without the "Torpedo Mode" modification installed, the G7a has a high travel speed of 81 km/h, which allows it to be effectively used as an ambush and close range weapon, albeit its limited range of 6 km renders it useless in open maps. On the other hand, the installed modification significantly increases the range to 14 km at the cost of reducing its top speed to only 56 km/h, making it a good area denial weapon in open maps, but performing terribly at close-quarters combat.

German Torpedoes manufactured prior to the end of World War II were designated as to their diameter, length and propulsion. Modifications were usually, but not always, denoted by T numbers. Length was to the nearest meter. For example, the designation G7a meant that the torpedo was 53.3 cm (21") in diameter, was about 7 m long and had a wet heater motor.

This torpedo is using SW39a explosive. Number indicating year of adaption. It was composed of TNT, Hexinit (HND), Ammonium Nitrate and Aluminum. Content of aluminum powder was increased from previous versions (SW36 and SW39) to increase shock wave.