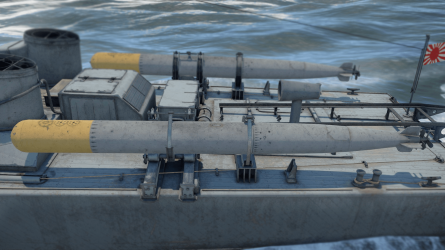 Compared to the torpedoes used by the motor torpedo boats at a similar BR, the Type 2 trades a very short range and a rather slow speed for a very powerful warhead. Relative to the peers of the same diameter, it maintains about the same speed and range, while having double the explosive power, thus being a great performer among 450 mm torpedoes of the era.

This torpedo is using Type 97 explosive also called Seigate. Seigate is mix of 60% TNT and 40% HND (Hexanitrodiphenylamine). Germany also used HND in their bombs with other chemicals, mostly TNT. It was used in bombs, naval mines and torpedoes but was discontinued due to its extreme toxicity.