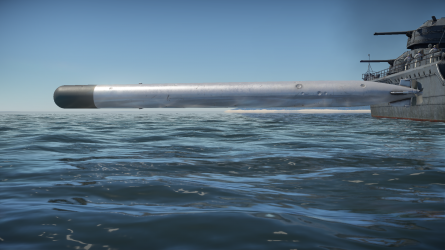 The Type 93 Model 3 torpedo being launched.

The Type 93 Model 3 is one of two versions of the 24-inch (610 mm) Type 93 torpedoes, the other being the Type 93 Model 1, Mod 2. Mounted on many destroyers and cruisers in the Japanese naval tech tree, the Type 93 torpedo has one of the furthest range and is one of the largest and fastest ship-launched torpedoes in the game. This powerful torpedo can allow even light ships to remain effective against the most armoured ships in the game.

The Type 93 Model 3 torpedo carries 780 kg Type 97 warhead, which is equivalent to 998.4 kg TNT. This makes it the single most powerful ship-launched torpedo in the game. A single hit is usually enough to sink most destroyers and cruisers.

One useful feature of the Type 93 Model 3 torpedo is that on most ships that carry them (with the exception of Shimakaze), extra torpedoes are stored on the ship, which allows the torpedo launchers to be reloaded in battle, usually enough for one full reload of the torpedo launchers. While this does limit the number of torpedoes the ship can send at once, the total amount of torpedoes is often much more than what destroyers and cruisers of other nations can carry. This is useful in Realistic Battles as a single ship can launch multiple salvoes of torpedoes without having to visit a capture point to reload. In Arcade Battles, this will allow the torpedoes launchers to effectively have a faster rate of fire, since the torpedo launchers will refill faster than the standard AB torpedo reload.

Be aware though that having extra torpedoes means that the ship essentially has above-deck, unarmoured ammo racks which can destroy the entire ship if detonated. These racks are, of course, emptied as their torpedoes are used to refill the launchers, so it might be a good idea to launch off at least enough torpedoes to empty the racks right away after spawning in. Unlike other torpedoes and fortunately for the Type 93 Model 3, its unique combination of both a large maximum range and a fast top speed make such strategies viable. By firing a wide salvo at the beginning of the match towards areas where many enemy ships are likely to be pass through (for example, capture points or narrow passes), these sections of the map can effectively be blocked off, and, because of their range and speed, they can catch enemies off-guard who either don't expect seeing torpedoes so early in the match or don't expect seeing torpedoes in areas of the map where other torpedoes usually fail to reach. The Type 93 Model 3 is a particularly useful weapon in the Encounter game mode. The 15 km maximum range just is enough to reach across the entire map. Ships armed with the Type 93 Model 3 torpedoes can strike the enemy team's AI convoy immediately from spawn.

The resulting torpedo, the Type 93 Model 1, Mod 1 torpedo, referred to as Sanso Gyorai (酸素魚雷, "oxygen torpedo"), entered service in 1935. The Type 93 torpedo had a diameter of 610 mm (24 inches), was 9 m (29 feet, 6 inches) long, weighed 2,700 kg, and, being a 24-inch torpedo, was rather large compared to its contemporaries, most of which were 21-inch torpedoes. Many torpedoes of the time used combustion engines for propulsion with compressed air as the oxidizer. In contrast, the Type 93 torpedo utilized pure, compressed oxygen as its oxidizer. Air is composed of roughly 20% oxygen and 78% nitrogen, the latter of which was a waste product that manifested as long bubble trails. Using pure oxygen allowed the Type 93 torpedo to effectively quintuple its efficiency while also eliminating the nitrogen byproduct. This greatly reduced the torpedo's bubble trail and left it virtually wakeless. The use of oxygen allowed the Type 93 torpedo to carry a large explosive charge, 490 kg of Type 97 explosive, without sacrificing fast speeds or long range.

Type 93 Model 3 was a late-war version of the Type 93 that was modified to carry a significantly larger explosive charge, 780 kg of Type 97 explosive, at the cost of decreased range, between 5 km and 10 km, depending on the speed setting. The Type 93 Model 3 also had a pointed nose, giving it increased speeds, and replaced the compressed air starter tank with a carbon tetrachloride tank, preventing catastrophic detonation in case of ignition. It was designed in 1943 and entered service in 1944.