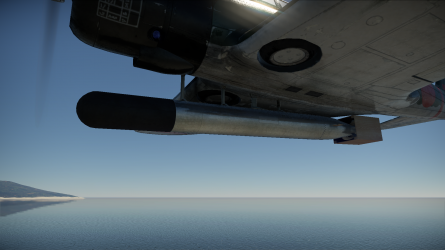 The Type 91 Model 2 is an aerial torpedo that can be found on several Japanese WWII bombers and torpedo bombers, often with a separate option for its other variant, Type 91 Model 3 (850 kg).

In air battles, a single hit is usually enough to sink most AI ships. Certain larger ships such as aircraft carriers and battleships may require two or more hits to sink, depending on where the torpedo hits. In naval battles, many of the larger ships such as heavy cruisers can require multiple torpedo hits, depending on where they are hit. Destroyers and smaller vessels can usually be sunk with a single torpedo.

Compared with its other variant,Type 91 Model 3 (850 kg), the Type 93 Model 2 is inferior, with a lower maximum drop speed and drop angle as well as a smaller warhead, everything else being the same. The Type 91 Model 2 is also 15 kg lighter than the Type 91 Model 3, although differences in flight performance when carrying one or the other is negligible.

In air battles, the Type 91 Model 2 can be used to attack enemy AI shipping, which usually can be sunk with a single hit. Notable are AI aircraft carriers, which usually require two hits to sink. Because of their short range of only 2 km, aircraft with this torpedo are required to close in much closer to their target than with other torpedoes, which exposes the aircraft to stronger AAA for longer. Despite that, because of the high maximum drop speed and drop altitude, the aircraft can dive in and exit at high speeds, making for a harder target.

In naval battles, the short range is a much greater issue, since the enemy's AAA will be much greater, although most torpedo attacks in this mode happen at closer ranges anyway. In turn, the high drop ranges become an even greater asset. To give the enemy as little time as possible to avoid, the Type 91 Model 2 should be dropped as close to the target and the water as possible and at the fastest speed possible, since its initial speed in the air will transfer somewhat to its speed in the water for some distance. Take care though not to drop the torpedo too close to the target, since the torpedo must travel 50 m in the water before its warhead is armed. Be sure to take into account that the torpedo travels a bit in the air before it hits the water.

At the time of the Type 91's inception, no aerial torpedo designs existed in Japan. In 1925, Rear Admiral Seiji Naruse, at a time a lieutenant, was promoted to development management officer at Imperial Japanese Navy Technical Department (Kampon) and sent to the United Kingdom to obtain aerial torpedo technology. He returned in 1927 and began development on Japan's first domestic aerial torpedo, the Type 91, with his team, the 91 Association, at Yokosuka Naval Arsenal. A prototype was tested in December 1930, with the Type 91 entering production a year later in December 1931. In 1934, Kampon halted production and development of the Type 91 in favor of an aerial version of the Type 93 torpedo, though designs were impractical and production of the Type 91 continued nonetheless. In 1936, a new version, Type 91 Mod 1, added wooden stabilization fins to the tail fins, which would improve water entry. The torpedo would discard the wooden fins upon entering the water. Type 91 Mod 1 had a diameter of 450 mm, a length of 5.275 m, weighed 784 kg, and carried a 150 kg Type 97 explosive charge. It had a range of 2 km and a speed of 33 knots (80 km/h).

Type 91 Mod 2 was a strengthened version of Type 91 Mod 1 designed in 1938. Later in August 1941, a modification of Type 91 Mod 2 was developed for use in a planned attack of the US Pacific Fleet at Pearl Harbor. This design featured an advanced anti-rolling system was added that, in the case of rolling, would use torpedo's rudders to steer it back to the neutral position. Unique to the Type 91's anti-rolling system was a system that would deflect the rudders in the opposite direction, countersteer, as it approached the neutral position, slowing its angular velocity, something that no other aerial torpedo at the time had. Entering production and service later that year, Type 91 Mod 2 increased the length to 5.486 m, the weight to 835 kg, and the warhead to 205 kg of Type 97 explosive. The anti-rolling system allowed the Type 91 Mod 2 to be successfully used in water as shallow as 20 m, and they would ultimately be used in the Attack on Pearl Harbor.