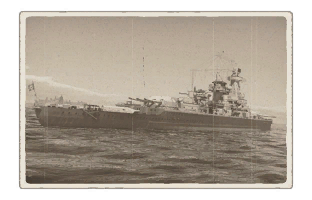 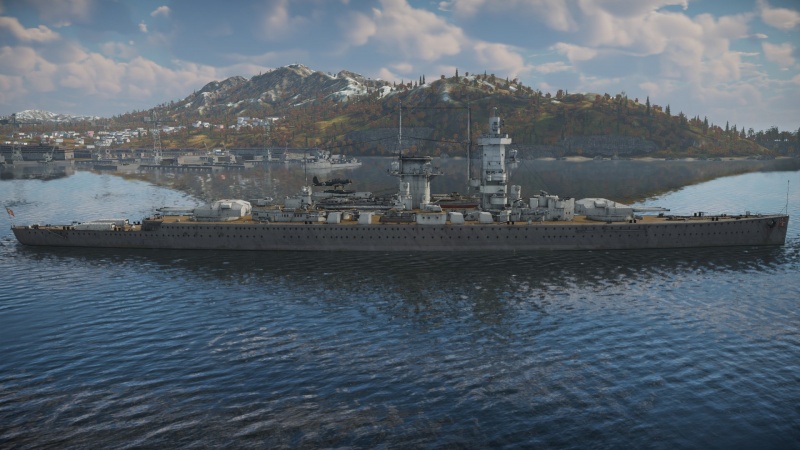 The Deutschland-class, Admiral Graf Spee, 1939 is a rank V German heavy cruiser with a battle rating of 5.7 (AB/RB/SB). It was introduced in Update 1.95 "Northern Wind".

Admiral Graf Spee was the last and heaviest of the 3 Deutschland-class ships built, sitting somewhere between a conventional heavy cruiser and a battlecruiser. Built to a 10,000 ton displacement due to treaty restrictions, once fully equipped and loaded she was well over 12,000 tons. Still, the restrictions did limit her capability, made to face only cruisers and destroyers, while keeping a large operational range. The result was that her armour was made thick enough to barely resist cruiser shells of the era. Graf Spee will not have too much trouble facing 150 mm and smaller shells.

Her crew is quite limited for her size, it is highly recommended to repair only when major damages are sustained, like losing a main turret or all engines. Doing otherwise will constantly feed her AA guns with fresh crew ready to be knocked unconscious again by the next 203+ mm HE shell that comes.

It is worth noting that her torpedo bulge can stop torpedoes up to 250 kg of TNT equivalent. This will save you from most early PT boat's torpedoes, and many aircraft-launched torpedoes. Against aircraft attacks, she has sufficient AA to defend herself, but with the lack of variable time fuse and radar aiming, some planes will pass her defences.

Her mobility for her BR is sub par. Many other heavy cruisers will cruise over 60 km/h, whereas she will barely manage over 50 km/h. She is vulnerable to torpedoes.

Her 283 mm (11.1 inch) cannons are effective against all targets in-game, however with only 6 guns total will be outgunned, and must take a relatively large angle to fire both turrets on a target. The advantage with them is that she can pierce dreadnoughts and cause significant damage, even reaching ammo racks through a dreadnought's thick armour by using AP shells. Another significant detriment is the very long reload time of 30 seconds resulting in a rather low DPS overall, and can make it hard to hit smaller targets at long ranges.

Her secondary armament consists of eight 150 mm single turrets, four on each side. These are very handy should your main turret get knocked out. They're also good against PT boats due to their much better reload time.

Her AA suite is somewhat decent for a 1939 ship. The 105 mm cannons only have access to HE-TF ammunition, making it rather difficult to accurately shoot down aircraft, especially at the longer ranges where the other armaments are ineffective. However, the 37 mm and 20 mm cannons are enough to knock out even large aircraft at closer ranges. The lack of HE-VT is very noticeable, aircraft may still penetrate her AA fire to drop their ordnance.

Her torpedoes will often get knocked out. They are placed over the stern, and usually, first incoming shots fall a bit far, knocking them out directly. It is recommended not to apply the "torpedo mode" upgrade, as the additional range is hard to take advantage of. And her torpedoes with the modifications will go slower than most cruisers she will face, making them near useless. The best chance of use is launching into cap zones and most likely routes the enemy will take.

Keep your distance from enemy cruisers (at least 14,000 m) or use island cover. You cannot out-shoot, or out-gun any other cruiser in game, your main advantage is range and punch. While she can take some hits, she remains a heavy cruiser, avoid getting focused by many enemy units. The enemy will want to sink you first as they fear your 283 mm cannons, which is nearly the calibre of dreadnoughts. Your best target are dreadnoughts, not only because you're the only cruiser out there that can hurt them, but being slow and big are easier to hit at long ranges. 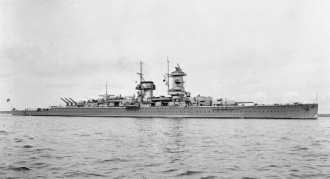 The Admiral Graf Spee was a ship of the Deutschland class, a series of 10-thousand ton cruisers built to the limitations of the Treaty of Versailles. Despite her small tonnage, the Graf Spee was armed with six 11-inch (283 mm) main guns in two triple turrets, a much more powerful armament than its allied counterparts. As a result, the ships of the Deutschland class were nicknamed "Pocket Battleships" by the UK, and "Panzerschiff" (armoured ship) within the Kriegsmarine.[1] The ship conducted several patrols near Spain during the Spanish Civil War, and participated in the Coronation Review of King George VI. The ship was responsible for the sinking of 9 merchant vessels during the first months of the Second World War, before being intercepted by a task force of the British Navy at the River Plate. Having caused extensive damage to her pursuers but damaged herself, the Graf Spee was scuttled in the mouth of the River Plate on December 17th 1939.[2]

Following Germany's defeat in the First World War and the Treaty of Versailles, the Kriegsmarine was limited to a force of pre-dreadnought battleships and cruisers, with a 10-thousand tonne limit on new vessels. In the early 1920s, the German naval ministry started working on a new design of ships that could replace its ageing pre-dreadnoughts. Initially, designs included a slow, heavily armed "monitor"-type vessel, as well as a faster "heavy-cruiser" type design. Following several years of changes, a final design was adopted featuring six 283 mm guns in two 3-gun turrets.[3] Despite some initial opposition from the victorious powers (the United Kingdom, United States and France), the ships were allowed to be built as they did not violate the Treaty of Versailles.

The new Deutschland-class ships were named "Panzerschiffs", or "Armoured Ships". However, they would soon become known as the "Pocket Battleship". Though they were of similar size to their counterparts (like the British County-class cruisers), the ships carried a much more powerful armament and had greater armour protection.[3] The vessels displaced between 11,500 and 12,500 tonnes (though it was stated in public that they were 10-thousand tonnes only) standard, and up to 16,000 tonnes full load.[1] Armament consisted of six 11-inch guns in two triple turrets, as well as a secondary armament of eight 5.9-inch guns in single turrets.[1] The ship was capable of making 26 knots (48 km/h) and had a main armour belt of 100 mm thickness.[1]

Three Deutschland-class ships were built: Deutschland (later Lutzow), Admiral Scheer, and Admiral Graf Spee. The Graf Spee was ordered as Panzerschiff C and was laid down in 1932.[3] It replaced the old pre-dreadnought Braunschweig and was named after Admiral Maximilian von Spee.[3] The ship was launched in 1934, and was christened by the daughter of Von Spee. The ship was formally commissioned into the German Fleet on January 6th, 1936.[3] 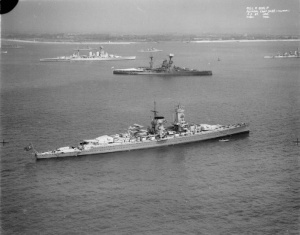 The Graf Spee at Spithead for King George VI's Coronation Review. HMS Resolution and HMS Hood can be seen in the background.

Prior to the start of the Second World War, the Graf Spee sailed into the Southern Atlantic to be in the best position for commerce raiding. On September 26th 1939, the Graf Spee was ordered to commence raiding against allied merchantmen in the southern Atlantic. Four days later, the cruiser located and captured the TSS Clement,[4] which was sunk using gunfire and torpedoes. As a result, a formidable task force was put together to locate and destroy the Spee; this consisted of the carriers HMS Hermes, Eagle, Ark Royal, and Bearn (of the French navy), the battleships Dunkerque, Strasbourg (both of the French Navy), and HMS Renown, as well as 16 cruisers.[3]

The task force initially failed to locate the Spee, allowing her to destroy eight more merchantmen. This brought her total tonnage destroyed to 50,089 tonnes. However, the last Merchantmen was able to signal the Spee's location to the Allies - as a result, the cruisers HMS Exeter, Ajax, and Achilles were sent to intercept the ship.[4]

Battle of the River Plate and Scuttling

On the morning of December 5th 1939, a ship was sighted across the Graf Spee's starboard bow. This was the cruiser Exeter, actively searching for the Spee.[2] The Graf Spee proceeded to close in and open fire, while the British cruisers immediately returned fire with their main batteries. In the span of a few hours, the Graf Spee was able to inflict heavy damage on all three cruisers, especially the Exeter, who received extensive damage: all four of her main battery turrets were knocked out, as well as the bridge and torpedo tubes.[4] Having been hit with numerous 11-inch shells, the ship was burning and developed a list due to extensive flooding. However, a strong defence was put up by cruisers Ajax and Achilles, allowing the crippled cruiser to make it to the Falkland Islands for repairs.

Nonetheless, the British cruisers succeeded in crippling the Graf Spee - a single 8-inch shell from Exeter hit the engine compartment and disabled the ship's diesel cleaning system. As a result, the ship had just 16 hours of ready fuel, eliminating her chances of returning home.[3] Shadowed by Achilles and Ajax, the damaged Graf Spee docked at the neutral port of Montevideo to conduct repairs, repatriate prisoners, and obtain medical attention for injured crewmembers. However, because of the neutrality agreements of the Hague Convention, the ship was only able to dock for 72 hours. During this time, Allied intelligence tricked the Germans into thinking that a superior Allied force was located outside the bay, including the battlecruiser Renown and carrier Ark Royal.[3] In fact, only the heavy cruiser HMS Cumberland had arrived, as the reinforcement force would not be able to arrive for another week.[3]

The deceiving news of British reinforcements was a fatal blow to the Graf Spee. After considering their options and discussing with the high command in Germany, the decision was made to scuttle the ship, as the Graf Spee's damage and insufficient ammunition would prevent her from breaking out.[2] On December 17th, the Graf Spee was scuttled in the River Plate estuary. Three days later, her captain committed suicide in full uniform over the Graf Spee's battle ensign.[2] The remainder of the crew were interned in Uruguay for the duration of the war, while the ship was partially broken up on site between 1942 and 1943.

After WWI, Germany’s navy was significantly limited in size due to the restrictions imposed by the Treaty of Versailles. In the early 1920s, some of the oldest serving ships of the Reichsmarine were starting to approach their legal replacement age. As such, preliminary design work on a replacement began in 1920, with the project gaining proper momentum in 1923.

Limited in terms of displacement and ship type permitted for construction, German engineers experimented with various design combinations. By the late 1920s, a final design, dubbed ‘Panzerschiff’ due to its use of large calibre cannons on a relatively lightly protected but mobile hull, was starting to emerge. However, political and economic turmoil in the country negatively impacted the project’s progress, causing its completion to be somewhat delayed.

Admiral Graf Spee saw extensive service in its relatively short service time. In the interwar period, she most notably took part in non-intervention patrols off the coast of Spain during the Spanish Civil War. Upon the outbreak of WWII, Graf Spee was sent to the southern Atlantic for commerce raiding, where after the fateful Battle of the River Plate in December 1939, Admiral Graf Spee was scuttled as a result of damages sustained during the battle, marking the end of its service history.