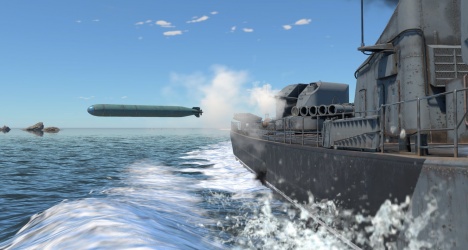 The SET-40 (Russian: "СЭТ-40") is a Soviet 400 mm torpedo for primary use against submarines. The designation "СЭТ" stands for "Самонаводящаяся Электрическая Торпеда" (Guided Electrical Torpedo) and 40 stands for the diameter.

The SET-40 is an early Cold War-era ASW (anti-submarine warfare) torpedo of Soviet origin used by a few corvettes and frigates. One of the first Russian torpedoes having an active-passive acoustic homing system An improvement over the previous MGT-1 passive homing torpedo and a needed weapon due to the Soviet Navy's need for a torpedo with small dimensions that could be mounted on submarines as well as small ships and boats that could not carry the larger and many times heavier 533 mm calibre weapons.

The SET-40 has a rather small explosive charge mainly designed for use against submarines, only 80 kg (176 lb) which was well enough at the time.

Torpedoes mounted on corvettes and frigates at a similar BR among other nations: 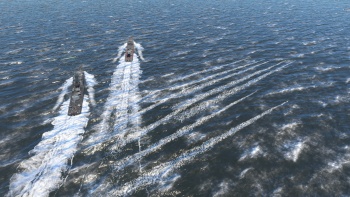 SKR-1 and 7 drop a fan of SET-40s.
The SET-40 torpedo can be a very potent weapon in the right situations used against other bluewater ships and even larger costal vessels. Due to the decent speed one can use them to surprise larger ships coming to coastal spawns in either Pr.12412 or Pr.12412P, or acting as a deterrent holding off certain choke points in the more deep areas while playing the SKR-1 or SKR-7.

The torpedoes suffer from having a small calibre and a small warhead, which can lead to situations where hits on other larger ships may not do much damage if not around a ammo rack or engine room.

The SET-40 was developed at NII-400 (НИИ-400) under the leadership of the chief designer В. I. Senderikhina, taking into account the experience learned from creating previous ASW torpedoes SET-53 and MGT-1. Designed to the same external parameters as the previous passive acoustic homing MGT-1 lightweight torpedo, the MGT-1 was to be used against small surface vessels, the SET-40 is for use against submarines. The preliminary design of individual components of the active-passive sonar system began in 1959. Testing of the torpedo began on Lake Ladoga in 1961. The torpedo was put into service in 1962. Serial production was carried out at the Dagdizel (Russian: "Дагди́зель") plant (Kaspiysk, Dagestan).

The SET-40 torpedo was cigar-shaped and divided into 4 main compartments:

The combat charging compartment of the torpedo contained a acoustic proximity fuse, an ignition device, and an explosive. 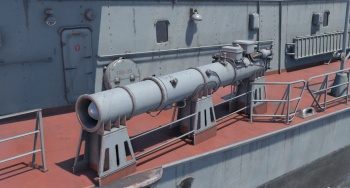 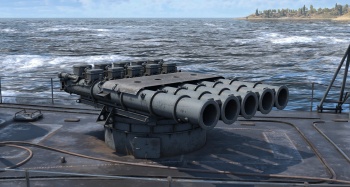 Later on an improved modification, the SET-40U, a modernization was carried out in 1966 in order to increase the reliability of the torpedo. A new homing system was installed on the torpedo - the SSN "Sapphire".

Larger ships had a quintuple mount PTA-40 mounted roughly amidships near their engine compliments. These where mounted on classes such as the Project 159 and Project 35 frigates.