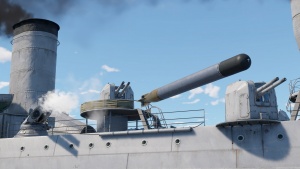 The S.I. 250/533,4X7,5 Tipo A (533 mm) is a typical Italian naval torpedo - in its base version extremely fast, but also extremely short-ranged, with the Torpedo Mode modification increasing range by 8,000 metres to a respectable 12 km but at a much slower pace - just 48 km/h.

Just like most of the other Italian torpedoes on the bluewater ships, Tipo A undergoes a radical transformation once the Torpedo Mode is researched and installed, from a situational, short-range burst weapon able to take down enemy cruisers while giving them minimal time to react, to a standard long-range torpedo able to threaten stationary and predictable targets.

Due to a relatively mediocre warhead, this torpedo neither excels nor disappoints in terms of damage potential. Hits near turrets of destroyers and cruisers will nearly always score a direct kill, while hits into the engines will be survivable by cruisers and some of the better-armoured destroyers.

Compared to the other Italian 533 mm torpedoes, Tipo A has the lowest, but still very respectable, maximum speed and a slightly smaller warhead.

The high speed and short range make this torpedo perfect for ambushes with use of terrain, especially in Realistic Battles where torpedo speeds are much lower and ships less manoeuvrable than in Arcade Battles. Torpedoes have a minimum arming distance of 50 metres, so that separation should be kept in mind when attacking enemy ships, in particular those on a collision course.

The Torpedo Mode modification turns them into a much more conventional gameplay, being able to take down NPC-controlled ships from a safe distance and weaponising narrow choke-points between islands.

In 1924 Italy annexed Rijeka (Fiume), Croatia, where the Whitehead torpedo factory was located and begun manufacturing their own derivatives of the design. And thus, in the interwar years, the Silurificio Italiano (S.I.) 270/533.4 Type A was born and manufactured in Baiae.

These torpedoes were produced with a 250 kg charge of TNT, a diameter of 533.4 mm, and a length of 7.5 metres, and were used by surface ships and submarines.

The torpedo could be set in one of 3 modes: