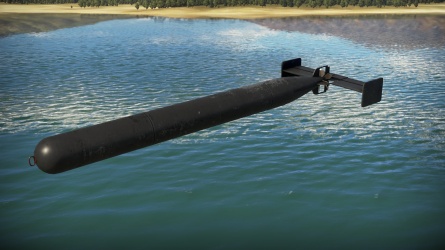 The 18-inch Mark XV, or simply Mark XV, is a British torpedo. It is used as both an aerial torpedo on some torpedo bombers and as a ship launched torpedo on some Motor Torpedo Boats (MTBs).

The Mark XV is a mid-war torpedo. It was deigned for both aerial use and use on torpedo boats. Being an aerial torpedo it is smaller than the 21 inch (53.3 mm) torpedoes designed exclusively for use on ships.

The naval version of the torpedo has an optional "Torpedo Mode" modification which increases the range from 3.2 km to 5 km, but reduces the speed by 7 kph, bringing it to 54 kph.

The increased warhead size compared to the Mark XII, means that the it is capable of killing just about any player controlled ships with a single hit. It is sometimes possible for some cruisers to survive a hit from a Mark XV, but this is rare.

Compared to the earlier Mark XII torpedo the Mark XV is slower but has a much more powerful warhead (more than twice the size).

When dropped from aircraft the Mark XV has a much better speed range than the Mark XII, being able to be dropped at speeds up to 443 kph (compared to 281 kph), however the max drop altitude is only marginally improved to 122 m.

The Mark XV entered service in 1942 with the Fleet Air Arm, RAF Coastal Command and Royal Navy. It was the first 18-inch torpedo to use Torpex (short for torpedo explosive) instead of TNT. Torpex is 50% more powerful than TNT by mass.