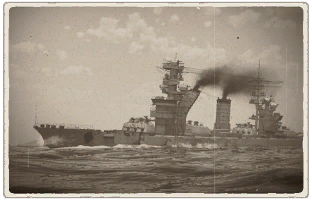 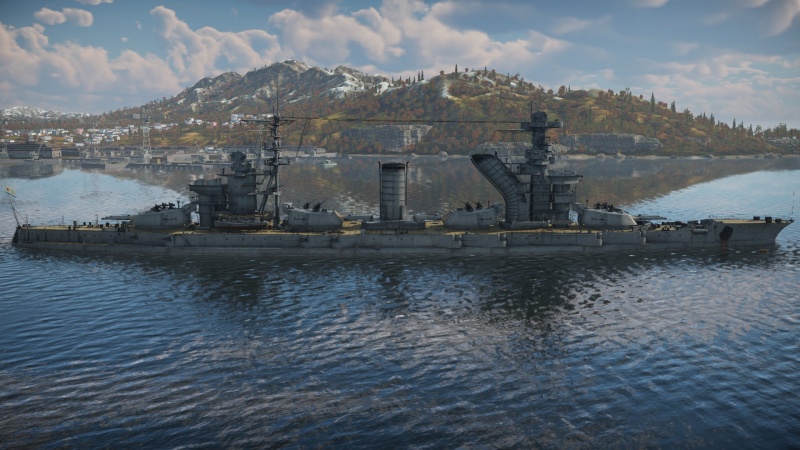 The Sevastopol-class, Parizhskaya kommuna, 1941 (or "Paris Commune") is a rank V Soviet battleship with a battle rating of 7.0 (AB/RB/SB). It was introduced in Update "Direct Hit".

As the first battleship in the game with World War II refit, the Parizhskaya kommuna has an exceptional survivability compared to other World War I dreadnoughts. While most of Parizhskaya kommuna's armour profile remains the same from her sister ship, the Poltava, there are several key changes. Most prominent changes is that her main turret's roof is doubled in thickness (from 76 mm to 152 mm) which made it much harder to disable. The citadel deck armour is also increased up to 76 mm. This increased protection is offset by the change of its fuel from coal to oil, which eliminates the protection from the coal bunkers and made it slightly worse at taking a hit through the armour belt. The vessel is also equipped with torpedo bulges which can protect the sides of the ship from torpedo warheads up to 250 kg of TNT.

The modernisation of the ship increased the displacement of the ship by some 7,000 tons, compared to the WW1-era Poltava, making the Parizhskaya Kommuna sit rather low in the water. While in real life this may be undesirable due to seakeeping issues, this is a huge benefit to your survivability in War Thunder. Much of the vital components of the ship (such as magazines and engines) are well below the waterline, the ships low profile making them difficult to hit.

The Parizhskaya kommuna has a high crew count, this allows her to tank more hits than any other dreadnoughts before going down.

The ship is armed with the same set of 305 mm guns as the Imperatritsa Mariya and Poltava, and has access to the same devastating shells. The modernisation of the Parizhskaya Kommuna included an increase to the rate of fire of the main cannons, which have a minimum reload time of 27 seconds. This makes a small but noticeable upgrade to the firepower, as it is able to sling substantially more shells downrange during the course of a regular battle.

The Parizhskaya Kommuna is armed with a competent anti-air suite, composed of 6 x 76 mm cannons, 16 x 37 mm autocannons and 12 x 12.7 mm machine guns. All MGs and autocannons are in unprotected single mounts, meaning that they're easily disabled by enemy gunfire or bombs. It's advisable to not bother repairing them while duelling with enemy vessels as you'll be essentially feeding crew out of the armoured citadel and into unprotected mounts that can be taken out by even destroyer-calibre HE.

The 76 mm cannons form your long-range defence, with their timed fuse shells. The filler of the shells is 200 g, but you have 6 of these cannons and the reload isn't terrible, so can keep up a steady stream of flak to keep inbound aircraft dodging, lest they be hit by fragments.

For closer range defence, you have the 37 mm autocannons. The mounts have a decent traverse speed, but the guns themselves are not outstanding, with relatively average accuracy, range and rate of fire, a couple of hits or less can delete enemy fighters. Bombers may take more hits though.

To top it off, the 12.7 mm MGs are basically there to supplement the 37 mm guns. They're not exactly long range and don't do a lot of damage, their rate of fire being the only thing going for them, but they increase the volume of fire being spewed at enemy planes, which is never a bad thing.

All in all, the Parizhskaya Kommuna can sustain an AA field roughly equivalent to many cruisers. While not in any way exceptional, it is still more than capable of defending against aircraft.