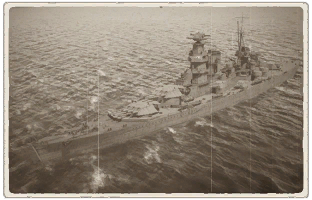 The Project 69, Kronshtadt, project is a rank V Soviet battlecruiser with a battle rating of 6.7 (AB/RB/SB). It was introduced in Update "Danger Zone".

During the 1930s Soviet shipbuilders were intensely working on designing new warships for the Soviet Navy. Among the top priorities was the development of a new cruiser design that could counter 10,000-ton cruisers of other nations. Several design proposals were submitted by 1935, of which none passed initial approval. The navy requested a new design, but the signing of a naval agreement with Great Britain in 1937 caused the requirements to collide with another similar project, ultimately resulting in this effort to also be canceled shortly afterwards.

Nonetheless, the Navy still sought to construct a fast and strong counter to other nations’ cruisers, resulting in the development of the Project 69 battlecruiser. However, the already modified requirements for a 26,200-ton vessel proved to be insufficient after the Soviet Navy found out about the specifications of the German Scharnhost class of battleships. This led to yet another update to the requirements in July 1938, now calling for an upgunned and up-armored 31,000-ton battlecruiser (or “heavy cruiser”). After another series of revisions, the design was finally approved for construction in Summer 1939, with two ships being ordered for completion by 1943.

One of the ordered ships - Kronshtadt - was laid down in Leningrad on 30th November, 1939. However, due to severe production delays, the warship was only deemed 10% completed by the time the German army launched its offensive on the USSR in June 1941. Following the invasion, all further construction work was suspended with some part of Kronshtadt being later used for fortifications around Leningrad. After the war, plans were formulated to convert the Kronshtadt into an aircraft carrier, but the design was already seen as outdated leading to the proposal being rejected. In 1947, the ultimate decision was made to dismantle and scrap the partially built hull.