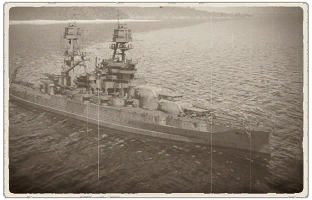 The Pennsylvania-class, USS Arizona (BB-39), 1938 is a rank V American battleship with a battle rating of 6.7 (AB/RB/SB). It was introduced in Update "Wind of Change".

The Arizona is a very well armoured battleship. The vessel has a main armour belt of 343 mm, one of the thickest in game. The belt gets progressively thinner the further underwater it is, from 343 mm above the waterline, to 203 mm a little under the waterline and then 76 mm well below the waterline. Speaking of underwater protection, the Arizona also has torpedo bulges which are rated to protect from torpedo warheads of 250 kg or less.

The turrets are the most well armoured turrets in the game, with angled 457 mm plates on the turret faces, 228 mm on the sides and 330 mm on the barbettes. That being said, the turret roofs only have a relatively thin 127 mm of armour, which could be vulnerable to plunging fire at long range. The conning tower has 406 mm and even the lower part of the smoke funnel has 381 mm at its thickest point. The ship also has 120 mm across the whole deck and a secondary 38 mm deck below that. The fore and aft bulkheads on the vessel are both 330 mm when above the waterline and 203 mm below it.

All in all, the Arizona is quite resistant to fire from enemy capital ships, however the vessel is using an all or nothing armour scheme. This armour scheme was designed for fighting enemy capital ships at long range, but in war thunder you tend to be fighting numerous ships at relatively close range. As opposed to the distributed armour scheme, the all or nothing armour scheme means you're a little more squishy when it comes to taking fire from smaller vessels as their rapid fire guns can cause a lot of flooding and fire and can still damage modules which aren't behind the armour.

The magazines are also positioned somewhat poorly, and are located just below the waterline and against the exterior of the hull. This means that the Arizona can be quite prone to ammorack detonation compared to other battleships.

Both the forward and aft magazines are located inside the large, expansive citadel.

The ship is very fat and sluggish. The top speed of 38 km/h is slow, even for a battleship, and the manoeuvrability is about what you'd expect from such a vessel.

The Arizona has 12 x 356 mm main cannons, split into 4 x triple turrets, two fore, two aft. The turrets are extremely slow, with a maximum traverse rate of 2°/second. The ship is painfully slow to respond to threats because of this. Now despite carrying 3 x 356 mm guns per turret, the cannons are crammed closer to one another than the triple turrets of other battleships with smaller main guns. This has the rather predictable effect of giving the turrets a long reload time. With a stock crew, the Arizona has a reload time of 65 seconds, 50 with a completely max level crew. This is by far the longest reload in the entire game. In the time it takes you to fire one salvo, the average enemy battleship will have fired two salvos, three if you're fighting a Scharnhorst. As well as giving you a terrible rate of shells/minute, the long reload also severely exacerbates any inaccuracy you have, as missing even a single salvo can grievously cut into your damage output.

Now, this wouldn't be such a problem if the guns were exceptionally powerful, but they're not. In fact, the performance of your 356 mm shells is actually about on par with some 305 mm shells of other nations, if not worse. Let's take a look at these shells.

You have access to a grand total of 2 shell types, HE and AP, you have no SAP at all.

So as you can see, it's a pretty terrible shell for its calibre.

The AP has impressive penetration with 645 mm at 1 km and 444 mm at 10 km, however that's where its good qualities come to an end. The 14 kg of filler is about average for a capital calibre AP shell and is inadequate at dealing with enemy capital ships, especially with the extra long reload. The shell just doesn't have the filler to competitively take on enemy battleships, but has so much penetration that it's useless against anything but a battleship. Shooting at cruisers and destroyers with this shell will result in a lot of shells overpenetrating and doing little damage.

After the design of the preceding Nevada-class battleships that employed the novel "all or nothing" armour scheme, the Navy sought a slightly larger, improved design to be ordered for construction in the fiscal year of 1913. As such, the Bureau for Construction & Repair came up with a number of design sketches to satisfy the Navy's requirement.

In April 1912, the final design of what was to become the Pennsylvania class was chosen with further work on refining the design continuing until September. The decision to order the design into construction was met with some political opposition over concerns that the design was too weak and expensive. Nonetheless, the class was approved for construction, with USS Pennsylvania being ordered in August 1912 while its sistership USS Arizona followed suit in March 1913.

USS Arizona was laid down in March 1914, launched in June 1915 and commissioned in October 1916. Due to oil shortages in Europe at the time, the ship didn't take part in hostilities during WWI, but instead escorted the American president Woodrow Wilson on his trip to Brest for the Paris Peace Conference in 1919 along with other warships. Subsequently, both Arizona and its sistership were transferred to the Pacific Fleet, undergoing substantial modernization in 1929 through 1931.

Throughout the 1930s, both ships took part in regular fleet exercises. However, during the Attack on Pearl Harbor in December 1941, USS Arizona was sunk following a catastrophic explosion of her fore magazines, after an aerial bomb managed to penetrate the ship's deck.