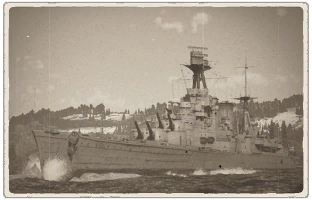 The Admiral-class, HMS Hood, 1941 is a rank V British battlecruiser with a battle rating of 7.0 (AB/RB/SB). It was introduced in Update "Danger Zone".

Conceptualized during World War I as the ultimate "super dreadnought" to counter any Imperial German ship, the Admiral-class battlecruiser underwent several redesigns (including being downgraded from the originally intended battleship design) before being finalized in 1918. The HMS Hood, the sole completed ship of the class, represents a compromise between her ambitious design and the financial downturn after the Great War that forced the British to reduce her capabilities.

Nevertheless, when the "Mighty Hood" was launched in 1920, she became the largest and heaviest warship in the world, a title she held until 1940 when the Japanese launched the Yamato-class battleship. Due to this, the HMS Hood became the status symbol of the might of the British Empire and the pride of the Royal Navy, up until the fateful battle at the Denmark Strait in 1941.

Hood, while not possessing very exceptional armor, is still reasonably protected, being superior in belt armor to Kongo, and of course being leaps and bounds over the previous British battlecruiser, HMS Invincible. Her armor consists of three layers, all rolled cemented armor, extending from below the waterline to the main deck, and is inclined slightly, which marginally improves its effectiveness. The lowest layer, the main belt, is 305 mm thick and extends from the forward to aft turrets on the ship, and on par with some battleships, providing protection against battleship shells only when well angled. The second layer is 178 mm thick, extending as far as the main belt, and is more than enough to shrug off cruiser shells. The top layer, 127 mm, extends from just aft of A turret to the end of the main deck.

Overall, her armor protection is not very impressive, however it will provide some degree of protection, and is certainly better than certain other capital ships.

The Hood is a very fast capital ship, capable of 57 km/h in RB, making her slightly faster than the IJN Kongo, and slightly slower than the Scharnhorst and Kronshtadt. Her acceleration is as can be expected of a ship her size, being quite poor. In addition, she struggles to turn, having an enormous turning radius and bleeding lots of speed while maneuvering.

Hood currently possesses the largest guns in the game, with four twin 15"/42 BL Mark I cannons, larger than those on the Bayern by 1 mm. She has two rounds available, 15 inch 4crh CPC, a SAPCBC shell, and 15 inch 4crh Mark XIIa APC, an APCBC shell. The SAPCBC shell, while having a smaller filler than the equivalent SAP shells on the Bayern and the Japanese 14", is still the strongest SAP shell in the game, solely due to its penetration. Penetrating 487 mm at point blank, it has very minimal penetration falloff, and it still penetrates 308 mm at 15 km, while the Bayern can only pen 170 mm at that range, while the Japanese 14" SAP can't even reach that penetration at 1km. This allows the Hood to smash any battleship designed before 'all or nothing' armor schemes came into wide use, as while their main belts may be able to hold up, their weaker upper belts stand absolutely no chance, and several of these SAP shells finding their way around the realms of enemy ammunition magazines will have very entertaining results. Due to the high filler, even hits to the upper hull may cause a large enough explosion to detonate ammunition several decks below.

Hood also has an APCBC shell, which is fairly strong with ~20 kg of TNT effective filler. However, it is advisable just use the SAP. It should be noted that Hood's accuracy is a bit subpar, which means that you can't simply play as a Death Star and obliterate every battleship you see.

Hood has the standard British secondaries of seven twin 4"/45 Mark XVI cannons. These guns do barely any damage, and are most useful in an AA role. Unlike other British ships using the same gun, Hood's secondaries do not get an HE-VT shell, due to the fact that she was sunk before the shell was developed in real life. However, her HE-TF can still deal with most aircraft.

Unlike the nest of light AA guns that can be seen on other WW2-era capital ships, Hood's AA only consists of seven mounts. However, three of those mounts are the glorious octuple 40 mm 2pdr QF Mk.VIII, which will immediately shred anything they see, due to the sheer amount of 40 mm shells they can throw at the foe. The other four mounts are the more lackluster quadruple 12.7 mm Vickers Mk.V, which are essentially just there for moral support.

However, the true moral support comes in the form of five 20-barreled UP (Unrotated Projectile) rocket launchers, designed to hurl rockets at enemy aircraft. While they are indicated as 'Auxiliary caliber guns' in-game, due to the fact that testing proved them as useless in-game as in real life, they were not implemented.

Hood has 12 533 mm Mk.IV torpedoes, the same seen on HMS Marlborough, in four launchers, two per side, near the back of the superstructure. The torpedoes are awful, slow, hard to aim, and worst of all, unlike other WW1-era ships, these launchers and their reserve torpedoes are located above the waterline in very exposed positions, meaning they are prone to explode when hit. It is not advised to take them.

HMS Hood is a strong ship on the seas of War Thunder, however her captains should not expect to be capable of tanking enemy fire like some other, more extensively protected capital ships. The Hood does have a similar main armour belt thickness, but her belt is much smaller than other capital ships, a tradeoff for her superior speed. In battle, this means that Hood is much more versatile than traditional battleships, as at 31 knots (57 km/h) she is roughly 10 knots faster than the average speed of most battleships in game. Keep in mind that Hood is very large, so it may not be advisable to enter capture points which are usually exposed, but at least she can reliably keep up with the cruisers and capture the objective in a pinch. Captains of HMS Hood should keep a close eye on her buoyancy, as she has a tendency to take on water much more rapidly than many other ships of her class, and will have a tendency to wallow and capsize very easily as well.

As for notable enemies, SMS Bayern and Parizhskaya Kommuna are both ships that will consistently be seen in battles and can do considerable damage very quickly. Bayern can be dealt with by a hit to the front ammo rack with a salvo of SAP shells, and will usually be relatively easy to deal with so long as she isn't at an angle. The Parizhskaya Kommuna is more difficult to defeat, so it is recommended to attempt to disable turrets before attempting to deal a fatal blow. Both Bayern and Parizhskaya Kommuna will reload faster than Hood, so her captains need to be careful when taking aim, as a mistake in aim can lead to rapid retaliation from the enemy.

The British Admiral-class battlecruisers date back to 1915, when an original battleship design with characteristics similar to Queen Elizabeth-class was converted into 30 knot battlecruisers. In 1916, the project was approved and orders were placed at the shipyards, but the Battle of Jutland, which showed the full omissions in the defense of the British battlecruisers, required new improvements to the project, which dragged on until August 1917.

Although four Admiral-class battlecruisers were ordered and laid down in shipyards, only one would be completed. The one ship of the class that would see completion would become HMS Hood, named after an 18th century British admiral. The ship was laid down in the John Brown & Company shipyard in Scotland in September 1916. Following its launching in 1918 and subsequent fitting-out, HMS Hood was commissioned into the ranks of the Royal Navy in May 1920, thus also becoming the largest warship in service at the time.

Upon entering service, HMS Hood took part in several showing-the-flag and training exercises in the interwar period. In November 1923 the ship set out to circumnavigate the globe, visiting ports in South Africa, India, Australia, New Zealand, Canada and the United States before returning to British waters in September 1924. 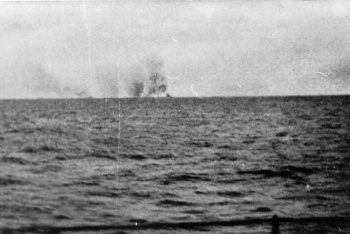 HMS Hood's explosion with HMS Prince of Wales near, taken from Prinz Eugen

At the outbreak of WWII, the recently overhauled HMS Hood was operating in the area around Iceland, hunting for German vessels. After the Fall of France, HMS Hood took part in Operation Catapult - the destruction of the French fleet at Mers-el-Kébir in July 1940. However, HMS Hood’s most famous and final engagement would become that of the Battle of the Denmark Strait in which the warship, along with HMS Prince of Wales clashed with the German battleship Bismarck and the accompanying heavy cruiser Prinz Eugen. Suffering a lethal strike to one of its magazines shortly after the start of the engagement, HMS Hood blew up and sank within three minutes with catastrophic losses. Due to its popularity among the British at the time and its tragic loss during the vessel’s fateful last engagement, HMS Hood retains its legendary status and is to this day one of the most well-known British warships.