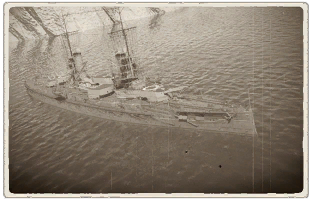 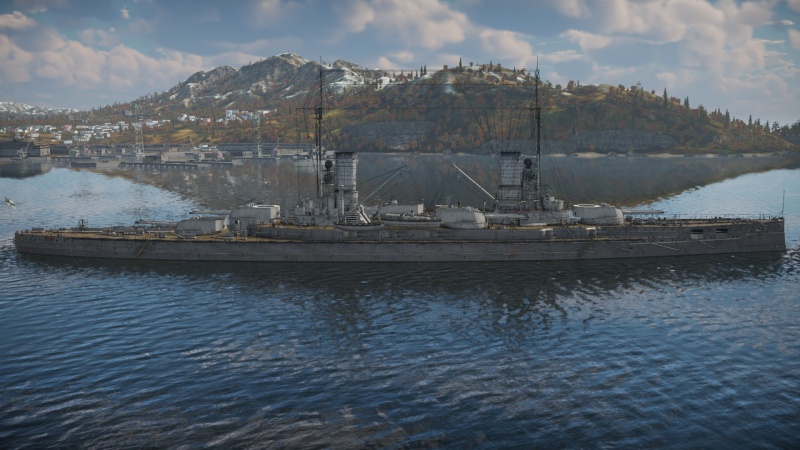 The Kaiser-class, SMS Kaiser, 1911 is a rank V German battleship with a battle rating of 6.3 (AB/RB/SB). It was introduced in Update "Ixwa Strike".

SMS Kaiser was the lead ship of the Kaiser-class of dreadnought battleships. Laid down in 1909, she was launched in 1911 and commissioned in 1912. It saw action at the famous Battle of Jutland and served until the end of the war, being interned at Scapa Flow following the armistice.

The Kaiser is undoubtedly a formidable ship. She has plenty of armour, up to 350 mm on the main belt. However, the frontal armour, just below the forward barbette is a major weak spot, having only 170 mm behind an additional sloped 60 mm. She is also relatively fast compared with other battleships, being able to cruise at a whopping 23 knots or 43 km/h (in RB). Her armament scheme, with two wing turrets amidships, also allows for a full 10-gun broadside, making it more effective than the Helgoland and Westfalen with only 8. However, her lower crew complement, at 1,084, leaves her slightly more vulnerable to fires and sustained gunfire.

The speed of Kaiser is definitely handy. While other battleships putter along at ~35 km/h, Kaiser can manage 43 km/h, making her faster than most other battleships. At 27,400 tons, she's certainly a large ship, and her turning radius definitely reflects that. While not impossible to dodge incoming torpedoes, captains will need ample time to manoeuvre out of their way.

The primary armament of SMS Kaiser are 10 x 305 mm SK L/50 cannons. They are placed in 5 twin gunned turrets, with two super firing aft, two wing amidships and one front turret. This layout, while slightly better than its other German counterparts, still forces captains to show much of their hull when attempting to use all 10. However, 8 can still be used fairly well, as Kaiser can be sufficiently angled while still bringing front, one wing and both aft turrets to bear. This will be the go-to for many instances, as showing full broadside to enemy battleships is always asking for trouble.

These are mediocre guns when looking at other 305 mm cannons from other nations. While the rounds are fired with a decent muzzle velocity, their damage potential is certainly underwhelming. The Kaiser can choose from three different ammo types, though only two of which have much use and dividing between the 850 total shells in the magazines, players will have to choose between a few combinations of loadouts.

The secondary armament is where Kaiser shines. It has 7 x 150 mm and 6 x 88 mm guns per side. This makes it exceptionally effective against lighter targets like destroyers, patrol boats and even some light cruisers. These guns are able to deal a devastating blow to all but the heaviest of ships in the game. However, note that the 88 mm guns are labeled as AA guns when selecting between armament types, though their limited elevation and lack of a timed explosive makes them far more effective against lighter ships. Kaiser can carry a total of 2,100 secondary shells. The 150 mm guns however have 3 shell types once again.

The anti-air capability of the Kaiser is lacking. However, this is typical for most battleships of this era. It has 12 x 88 mm guns, half of which are in hull mounted casemates. Therefore, the elevation of said guns (only +18°), is not very useful. There are of course 6 guns mounted in superstructures, however they too lack meaningful elevation and traverse speed. This results in a large zone above the ship where captains will be completely vulnerable to attack. While the 88 mm guns can be used to shoot at low-flying targets, their lack of elevation and traverse speed makes them hard to use in the AA role. As before, they are much easier to use as light ship deterrents.

The Kaiser is armed with multiple 500 mm torpedoes. They have a relatively small warhead of only 160 kg and have a mild range of 5 km. They also move at a whole 50 km/h, meaning cruisers and destroyers can simply outrun them, let alone dodge them. However, in rare circumstances, they can still be effective as a surprise attack on an enemy vessel. Loading them will make the Kaiser easier to ammo rack as well.

The Kaiser is definitely a fun ship to play given the right circumstance. While she doesn't stack up to ships like Marlborough or Mariya, she does still have the armour to take quite a few hits. The main armament of Kaiser is best used at longer range, as plunging fire only helps its lower penetration rounds find weak spots. Surprisingly though, she can be extremely effective in close quarters as well, using her strong belt and bow plating to tank rounds from cruisers and even battleships. However, the armour below the forward barbette is weaker than other battleships and can be exploited by other large calibre rounds from opposing dreadnoughts. The speed of Kaiser is very useful up close and its slightly better turning radius compared to other ships allows better responsiveness to incoming torpedoes, though captains will still need to stay vigilant.

Additionally, the overwhelming firepower of the secondary battery makes Kaiser a very formidable opponent up close, especially against light targets. However, its lack of air defense makes it an easy target for high flying and dive bombing planes, so be careful.

Overall, Kaiser is a well rounded ship, being able to sit comfortable at range and duel with its main guns, or take it up close and brawl with unsuspecting cruisers. While its main guns lack filler, it can still be effective against all types of enemies and will surely be fun to take out once in a while.

During the 1900's, the German Imperial navy placed orders for five new dreadnought battleships to be constructed in order to replace older warships of the Siegfried and Odin classes. These five new ships would become the Kaiser-class battleships, which among other technological advancements, featured turbine propulsion systems - a novelty on German warships at the time.

Kaiser, the lead ship of the class, was laid down in Kiel in December 1909, launched in March 1911 and subsequently commissioned in August 1912. After crew training and taking part in several fleet exercises, Kaiser along with its sistership König Albert and cruiser Strassburg, was sent on a long-distance cruise to German South-West Africa and South America to test the novel steam propulsion system for endurance and reliability. The flotilla returned from their cruise to Kiel in June of 1914.

Following the outbreak of the Great War, Kaiser took part in nearly every major naval operation of the conflict. This included the famous Battle of Jutland in mid 1916, where Kaiser sustained two direct hits, but suffered no substantial damage. Furthermore, Kaiser also took part in Operation Albion in 1917, bombarding Russian coastal positions in the Baltic, and crippling the destroyer Grom, followed by her sinking.

With the German surrender in November 1918, part of the High Seas Fleet, including the SMS Kaiser, was interned at the British naval base at Scapa Flow. The commanding German officer, Rear Admiral Ludwig von Reuter, believing that the fleet would be seized by the British, ordered the scuttling of the entire fleet on 21st of June, 1919. Kaiser was later raised in 1929 and broken up for scrap in the early 1930's.