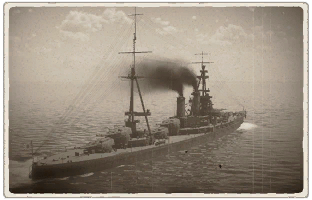 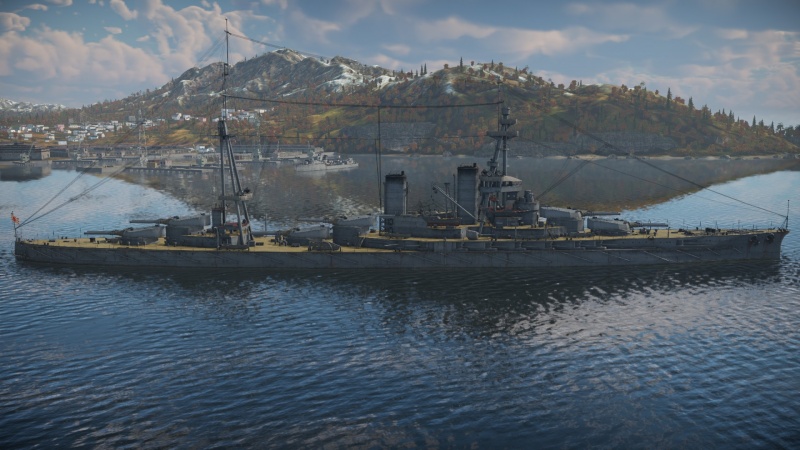 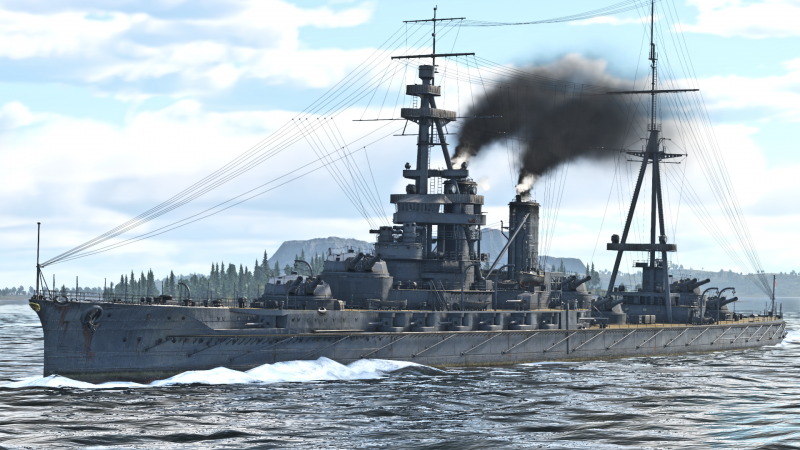 The Ise-class, IJN Hyuga, 1920 (日向, namesake: Hyūga (old) Province) is a rank V Japanese battleship with a battle rating of 6.7 (AB/RB/SB). It was introduced in Update "Hot Tracks".

Hyuga's armour will protect you from almost everything except other battleships and Admiral Graf Spee's AP ammunition. Continuous fire from multiple light cruisers will whittle down your crew, but a single well placed salvo from the heavier ships will regularly detonate your magazines, especially the second turret from the front as its magazine is above the waterline. This often will cost you your vessel. Angling your armour is important so it is advisable to angle as much as possible, even if it means losing the front middle turret's ability to fire. A good amount of crew will keep you alive for quite a while. Torpedoes can devastate the ship especially the Japanese long lance variety. Be sure to make constant course corrections in between salvos when at medium to close ranges from the enemy. Hyuga can survive many bombs hits unless the bombs exceed 1000 kg in weight. Damage control should focus on fire and flooding. Repair should be secondary as your turrets and guns are very strong. Many enemies will try to "revenge bomb" you so always try to keep close to decent AA ships. The lacklustre anti-air armament on the ship means planes can fly circles around you at very close range without threat from your ship.

With a top speed of 44 km/h, Hyuga is not a fast ship. Do not rely on the mobility to avoid incoming fire. Manoeuvres need to be planned in advance and the slow turning rate will cost you minutes of reversing and turning to correct mistakes such as running aground in tight spaces. It is best to avoid tight spaces in general.

As a 1920s battleship, the anti-aircraft defense wasn't a big concern and hence why the IJN Hyuga has a lacklustre defense against aerial attacks with only 6 Lewis guns spread out across the ship. While very unlikely, planes making a very slow pass and getting within a few hundred meters of the ship might catch some bullets and potentially get shot down. 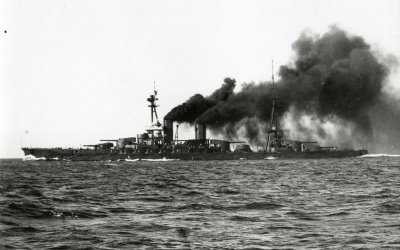 IJN Hyuga seen shortly after her completion in April of 1918.

IJN Hyuga was the second ship of the Ise class, a class of two Japanese super-dreadnoughts built for the Imperial Japanese Navy. As the third class of dreadnoughts designed for the Japanese Navy (after the preceding Fuso and Kawachi classes), Hyuga mounted an extremely powerful main battery. She was commissioned too late to serve in the First World War, but saw service in the interwar period including some minor roles during the Second Sino-Japanese war. Hyuga was extensively modernized before the start of the Second World War, but remained obsolete. As a result, she saw little combat action. In 1943, Hyuga was given a heavy refit, and the rear guns were removed to make way for a spacious flight deck for seaplanes. She was eventually sunk by American carrier aircraft in 1945 at Kure, and was scrapped between 1946 and 1947.

In 1906, the Japanese navy was given a very rough jolt when the British launched the HMS Dreadnought, the first dreadnought battleship. The advent of dreadnoughts had made all existing Japanese capital ships obsolete, and as a result, the Japanese began an ambitious shipbuilding program. Two ships of the Kawachi-class were built, followed by two ships of the Fuso class. Initially, just a single Fuso-class ship was ordered, but after the Japanese Diet approved more funding, three more ships were ordered - Yamashiro, Ise and Hyuga. 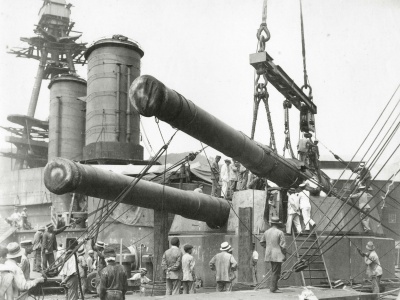 However, following the launch and completion of Fuso, the Japanese found that the design had several flaws. Namely, the central-mounted 12-inch guns complicated gun loading, and the 6-inch secondary guns had fire rate problems due to their manual loading. Thus, the Japanese navy developed a new design that would become the Ise class.

Visually, Hyuga looked very similar to the previous Fuso class, and had the same main battery of twelve 14-inch (356 mm) guns in six dual mounts. However, the turrets were rearranged, mounted in a similar layout as the American Wyoming-class. Two turrets were mounted in a superfiring pair forward of the superstructure, while another pair was located at the aft. Finally, the third pair was located facing backwards between the fore and rear masts. Hyuga also carried twenty 5.5 inch (140 mm) guns in single mounts, 10 per side. She carried four 7.7 mm machine guns for AA defence, as well as six 533 mm torpedo tubes. Hyuga was able to make 23 knots (41 km/h), making her faster than her American and British counterparts.

Hyuga was laid down in May of 1915, four days before her sister-ship Ise was laid down. She was launched in January of 1917, and completed in April of 1918. Upon her completion, Hyuga, along with her sister ship Ise, were assigned to the first Battleship squadron of the Japanese First Fleet.

Hyuga was commissioned too late to see service during the First World War, but immediately began serving with the First Fleet upon her completion. Immediately after her completion, Hyuga had a turret explosion that killed 11 men; soon after, she collided with a schooner. Despite this rather poor introduction, Hyuga served extensively with the First Fleet and sailed on several cruises in the East China Sea, and north towards the Soviet Union. Following the Kanto earthquake of 1923, she loaded and transported supplies for earthquake victims. In 1928, she received a minor refit and gained a new, larger superstructure. She patrolled the Chinese coast following the Shanghai incident, and later performed patrol duties during the Sino-Japanese war.

In 1936, Hyuga received a full refit, and was fitted with her large pagoda mast. This refit increased her full load weight by almost 6000 tons, from 36 500 to 42 200. She was fitted with a full steam turbine propulsion system increasing her speed to 24.5 knots, and she received her first set of anti-aircraft defenses comprising several dual 5-inch (127 mm) DP guns and ten dual 25 mm AA gun mounts. She later served as the flagship of Puyi, the Japanese-installed emperor of the puppet state of Manchuria, during his visit to Japan in 1940.

Service during the Second World War

Hyuga served as part of the cover for the first Carrier Fleet during the Pearl Harbour attack, and later attempted to intercept the USS Hornet after she launched the aircraft of the Doolittle Raid. In early 1942, Hyuga suffered an explosion in her No. 5 turret that killed over 50 crew members and caused severe damage to the turret - it was removed, the barbette covered with an armour plate, and additional 25 mm AA guns were installed in its place. Hyuga later served as part of the force covering the Japanese carrier fleet attacking Midway atoll.

IJN Hyuga after her reconstruction to a hybrid battleship-carrier in 1943.

Following the catastrophic loss of four Japanese fleet carriers at Midway, the Japanese were in dire need of additional aircraft-carrying ships. Because of the enormous cost of completely rebuilding a battleship into an aircraft carrier, the decision was made to rebuild Ise and Hyuga into hybrid battleship-carriers. The ships had their No. 5 and No. 6 rear turrets removed (though Hyuga's No. 5 turret had already been destroyed in the aforementioned explosion), replaced with a massive flight deck and hangar. Because the flight deck was too short to support carrier landings and takeoffs, Hyuga was fitted with two aircraft catapults. She was designed to carry an air group of 22 aircraft, including D4Y Suisei dive bombers (which had to land on a carrier or a land base) and E16A Zuiun reconnaissance seaplanes (which could be recovered). She also received a formidable anti-aircraft armament composed of 104 25 mm guns in 31 triple and 11 single mounts, as well as several anti-aircraft rocket launchers.

It was in this configuration that Hyuga sailed in June of 1943 as the flagship of the Japanese 4th Carrier division. She saw extensive combat action during the battle of Leyte Gulf, where she provided anti-aircraft cover for Japanese cruisers. She was attacked by a force of 125 American carrier aircraft, but suffered little damage as she was not targeted.

In February of 1945, Hyuga transported a large amount of critical war materials back to Japan with her sister Ise and the light cruiser Oyodo. After being pursued by numerous American submarines, they arrived in Japan in early March. Hyuga was thereafter reduced to reserve, and served as an advanced training ship, moored in Hiroshima bay. In late March of 1945, she was heavily damaged by an allied air raid on Kure; most of her anti-aircraft and secondary mounts were removed for shore defence. In July, she was severely damaged again during the bombing of Kure; hit by 10 bombs, she was abandoned and later sank to the bottom of the harbour. After the war, she was raised, and scrapped by 1947.