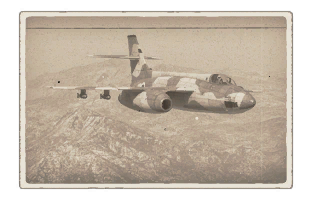 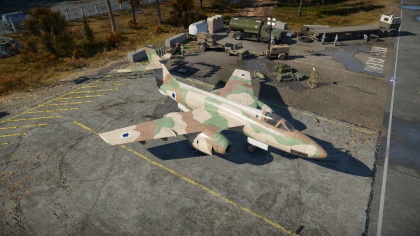 Like most bombers, the Israeli Vautour has decent maneuverability (for a bomber mind you), but you shouldn't be turning with anything to begin with. Where this plane really shines is the acceleration owing to the two powerful engines in the underling nacelles and the heavy air frame. Which makes it amazing in the vertical. But since you can't have everything, the wings will break in prolonged >7g maneuvers. Essentially you don't want to do any insane maneuvers, and risk getting sent back to the hanger.

This thing can take quite a lot of punishment before going down due to the bomber's damage model. There isn't much armour to speak of, put if played correctly you shouldn't get hit in the first place.

The Vautour IIA IDF/AF (France) is armed with:

The Vautour IIA IDF/AF (France) can be outfitted with the following ordnance:

In Realistic Battles (though this can apply to all game modes), you have two options:

Look for high altitude dots , these usually mean other jet bombers or the odd Tu-4. The missiles are not that effective at a range greater then 1 km. The farther that missiles are fired, the greater the chance of the locked-on enemy have in evading the missile. On the off hand that the first missile misses, the Vautour has four of them so a follow-up shot is an encouraged option.

Once in a while, look around and support your team, especially the teammates that are engaging the enemy. If an ally has an enemy at their tail, work around towards the enemy's rear and fire off a missile to take care of them. This can be beneficial if a long chain of alternating enemy and ally fighters have gotten together as each of them try to hit the fighter at their front and evade the fighter at their tail. If able to pounce on these chains, come in from the very rear and take out the very last enemy fighter in this chain. This will either cause the chain to break-up, potentially freeing up pressure on your allies, or the chain will continue without noticing the Vautour's presence. In the latter case, continue towards the next enemy and take them out one-by-one.

Once all missiles are expended, switch to the guns, which are powerful enough to take care of any enemies unfortunate to be in front of them. However, high-speeds will cause the controls to be less responsive, so fine-manoeuvring for these gun-runs may be difficult. If the gun pass misses, itch up and use the Vautour's amazing vertical energy retention to reset and try again. Usually the guns don't get much use as the missiles will completely over shadow them.

Overall this plane destroys people who don't pay attention and or make bad plays. The most effective way to lock it down is to simply look back every now and then, just to make sure nothing's behind you.

F-100's: These things will out speed you and outmaneuver you in the vertical. If one happens to latch onto your 6, drag him away from his friends and force him to overshoot. Then assuming the reversal was successful, throw a missile at them. Most F-100 may not be aware that the Vautour has missiles, and so firing off a missile can destroy the F-100 while it is supersonic.

Vautours: The Vautour's great performance means its greatest enemy is going to be itself. Be especially wary on maps like Hokkaido where there's thick cloud cover. They have a tendency to come out of nowhere, destroy you and retreat back into the cloud cover like some air-borne monster.