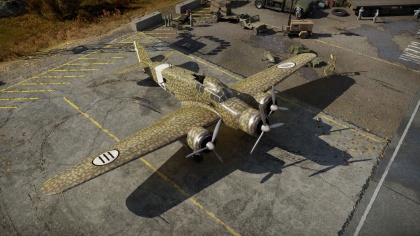 The ▀S.M.79 Sparviero AS (1941) is a Rank II gift German bomber with a battle rating of 2.3 (AB/RB/SB). It was in the game since the start of the Open Beta Test prior to Update 1.27 in the German aviation tree. In Update 1.69 "Regia Aeronautica", the S.M.79 as well as the other Italian planes in the German tree were moved to the new Italian tree.

With a significantly higher Battle Rating than the previous two Sparviero models, the 1941 Sparviero features the same bomb loadouts (but can also carry a single torpedo) and armament, with only relatively minor increases in performance. While unable to compete with the Ju 88 or the He 111 H-6 and Fw 200 C-1 Condor in terms of performance or sheer bomb-carrying capacity, respectively, the SM.79 (1941) can still perform decently if played carefully.

It is very important to avoid fighters in the SM.79, as it has a lot of defensive fire deadzones and is not as durable as the Ju 88. If an enemy fighter is foolish enough to stay within the reach of the 12.7 mm Breda-SAFATs, they can deal a considerable amount of damage to the pursuer. However, the gunners themselves have no armour protection, and can be knocked out fairly easily.

Due to the relatively light payload carried by the SM.79, it is not particularly recommended to go base bombing, even with the max load of 5 x 250 kg bombs. It is better to dive towards ground level and destroy targets like tanks or vehicles, as this will make it harder for enemies to attack you from below, where the Sparviero has very limited defensive fire coverage. The 500 kg bombs reduce your total bombload to only 1000 kg, but they are more forgiving of poor bomb aiming and can take out pillboxes with a single hit. Be wary of attacks from the sides, as only the weak 7.7 mm machine guns cover the flanks of the Sparviero.