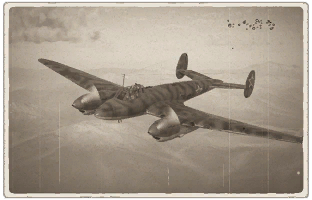 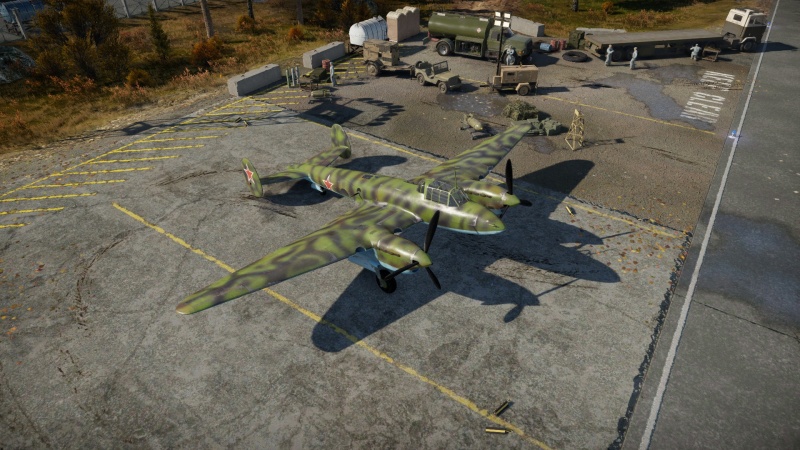 However, Germany launched the "Blitzkrieg" campaign in September 1939. Aside from their revolutionary usage of tanks, the campaign in Poland featured notable usage of Ju 87 dive bombers and showed their potential. Consequently, the Soviet authorities ordered the VI-100 to be redesigned as a dive bomber. Pressurization equipment and engine superchargers were removed, dive brakes were installed under the wings and the bombardier position was added to the nose of the aircraft(raising the number of crew members to three). A ventral bomb bay was added along with the two smaller bomb positions located at the rear of engine nacelles. Two rear-facing turrets, each armed by a single ShKAS machine gun, were installed to dorsal and ventral positions. Resulting aircraft, able to carry up to 1600 kg / 3520 lbs of bombs, was designated PB-100. The first prototype flew on 15th December 1940 and its performance (top speed of 540.7 km/h (336 mph)) was so good that Vladimir Petlyakov was released and the aircraft was named after him, thus receiving the designation Petlyakov Pe-2. The bomber was then rushed into serial production and deliveries to combat units began in the spring of 1941. The deliveries were, however, slow and by the time of the German invasion in June 1941, only about 458 Pe-2's were delivered.

The final stage of mass production saw rather minor changes in the Pe-2's design. Beginning with series 359, all aircraft were equipped with individual exhaust pipes for the engines, and from series 382 on, a more powerful pneumatic starter was installed, changes were made to the sights, the oxygen system, the radio equipment, and other devices. In addition, minor aerodynamic improvements were made.

Towards the very end of 1944, the last major change was introduced into the production Pe-2s: the wingtips were redesigned. The modified tips increased the Pe-2's maximum flight speeds and service ceiling and simultaneously improved its landing behavior.

The Pe-2 was used on all fronts by the Air Force of the Workers' and Peasants' Red Army and also by naval aviation units from the beginning of World War II. It was employed as a dive bomber and as a photo reconnaissance aircraft. In early 1943, the Pe-2 drove the obsolete SB bombers out of regular military units, becoming the main and most widespread Soviet front line bomber.

The Pe-2 reached its maximum potential under the control of Soviet flight crews, with whom it was a popular plane. It remained in service from the first day of the war to the last. Its last sortie in Europe was flown on May 8, 1945, towards the port of Liepaja. The Pe-2s also participated in a short military campaign in the Far East.

During the war years, the Pe-2 was in service with Finland and Poland, as well as the USSR. Finnish Pe-2s, captured Soviet planes purchased from Germany, were used in Southern Karelia and against Leningrad, and they also participated in anti-submarine patrolling in the Baltics. The Polish bombers did not take part in any combat operations.

The Pe-2's production was halted in December 1945. A total of 11,070 Pe-2's (including all variants) were produced from 1940 to 1945. None of the Soviet bombers were built in such numbers as the Pe-2, neither before nor after its production.

After the war, the Pe-2 was in service with the USSR Air Force for several more years and were also shipped to the USSR's allies: Poland, Czechoslovakia, Bulgaria, Yugoslavia, and China.