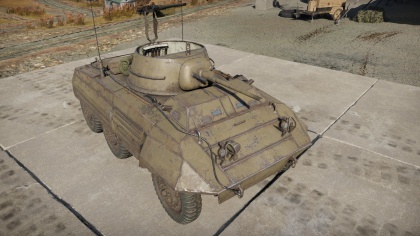 The M8 Greyhound has next to no armour protection. Its armour can stop rifle-calibre machine gun fire, but nothing more. Even then, the vehicle's turret has an open roof and very thin armour on the sides and the rear, so it is still possible for a few unlucky machine gun bullets to find their way inside. The Greyhound also has hull-break, however, generally speaking, losing all your crew members is a greater concern especially given that most vehicles at its battle rating do not have very powerful cannons. In addition, the modules are lined up and the crew is close together when looking straight at the front of the vehicle. From the side, however, this is not the case - there is a small area behind the two crew members in the turret but in front of the fuel tank with no modules in it and an even larger area of empty space between the turret crew and the driver/machine gunner.

While it has poor armour and survivability, the M8 Greyhound excels in terms of mobility. As a wheeled vehicle it reaches 60 km/h on road in arcade with stock modules and 40 km/h off road.

Main article: M6 (37 mm)
The M8 Greyhound is armed with an 37 mm M6 cannon as its main armament. This is a small calibre fast-firing gun with a maximum penetration of 84 mm at 100 m (M51B1/B2 shell), being able to penetrate almost all the opponents it will ever face. While it lacks the post-penetration damage to one-shot most enemy vehicles, it can quickly finish them off with its fast reload. The penetration and trajectory drop significantly beyond 500 m. Note that the gun has a vertical stabiliser, giving the player a huge advantage in some cases, but keep in mind that the stabiliser only works when the tank is slower than 10 km/h.

Main articles: M2HB (12.7 mm), M1919A4 (7.62 mm)
The two machine guns on the M8 Greyhound are the good old .50 cal M2HB and the 7.62 mm M1919A4. The roof-mounted .50 cal can traverse 360 degrees and has great depression & elevation, posting a big threat to any plane that is flying too close to the M8. It has an unbelievable penetration of 31mm at 10m, meaning it can easily penetrate plenty of lightly armoured vehicles and even the side of some medium tanks. The 7.62mm, on the other hand, can only efficiently damage exposed crews due to its low penetration.

When using this vehicle keep in mind that you are virtually naked to every main gun, that means you should not expose yourself unnecessarily and not give the opponents a chance to shoot at you, coupled with the fact that the main gun can penetrate every other vehicle in its rank. Its excellent mobility makes this vehicle a hit-and-run tactic that is very viable. Ambush your opponent on your terms after you destroy him, change your position again, find concealment and or cover, use your fast reverse speed to your advantage, avoid one on one fights, and fair fights.

At the start of the match, the M8 is best used for a point-capping vehicle. Find a road connecting a point to unleash its scary 90 km/h on-road top speed, and it is likely to get to the point before the enemy can. Once the point is capped quickly, move away as there are likely to be artillery strikes, which can critically damage the M8.

After capping a point, there are two good options (just examples, the player is free to play in their way). One is to hide at the side of the point, waiting for the enemy to re-cap it. Use its small profile to set up a good ambush, and flank the enemy unexpectedly. The fast-firing gun will genuinely shine when attacking several enemies from the side or rear, allowing the player to knock out a surprising amount of enemies. Once the enemies are wiped out, quickly re-cap the point and ambush again. Note that the player might want to change their position as some enemy might try and revenge.

These amphibious tanks are well known for their super buffed hull size. Indeed, there is a huge space between the driving compartment and the fighting compartment that will absorb almost any incoming shells, and unfortunately, the M8's solid AP makes this worse. If an M8 doesn't know where are the crew located on an LVT(A), they will die due to not being able to knock out their crew effectively. Remember its crew location, and the M8 can easily take them out.

The driver is at the foremost part of the hull. Behind him, there is absolutely nothing, so you must avoid shooting there. Behind the empty space, the turret houses 2-3 crew. Shoot there to disable its gun. And don't forget, at the very rear of the LVT, two machine gunners exposed, take them out with the .50 cal. Memorize those three main locations of the crew, and you can effectively destroy any LVT out there with your rapid reload. Also, if the angle isn't too big, the .50 can penetrate the LVT's weak armor.