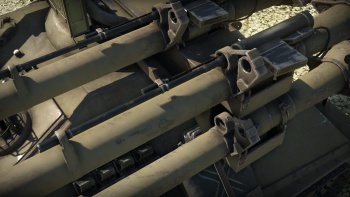 The M8C was designed specifically as a spotting gun for cannons and is most commonly seen on the M40. For the M48A2 Spotter-Tracer (S) bullets in a 12.7x77mm case to match the ballistics of the cannon round, a smaller case with less power was produced, resulting in a 22mm shorter round than the well known .50 BMG (12.7x99mm). A semi-automatic it was meant fire 1 round per pull for the gunner to easily see were the round flies and lands, adjust aim and let loose the 106mm round. All 106 mm M40A1C guns mounted this rifle when produced, but it could easily be removed (the lower 2 on M50 tank is removed).

The M8C only has access to one ammo belt consisting entirely of M48A2 Spotter-Tracer (S) bullets. As these bullets are designed to be visible on impact, for use in ranging the main gun, rather than to penetrate armour they have extremely poor ballistic performance, with a maximum penetration of 2 mm.

Note: On the in game interface, penetration is erroneously listed as 3 mm at all ranges and angles.

Unlike most other tank-mounted machine guns, which are designed primary for anti-infantry, anti-aircraft, or general purpose use; the M8C is specifically designed as a "spotting rifle". The bullets follow the same trajectory as the rounds from the M40 recoilless rifle the weapon is affixed to. The rounds are designed to be visible during flight and upon impact, instead of penetrating armour, and so the the rounds have much worse ballistic performance than other .50 cal rounds. Even compared to another ranging weapon, the L21A1 (12.7 mm), the ballistic performance is extremely poor, with the M8C having a maximum penetration of 2 mm (compared to 7 mm) and a lower muzzle velocity of 532 m/s (compared to 793 m/s). The M8C does however get a larger magazine than the L21A1, at 5 rounds.

The M8C should be used only for ranging the recoilless rifle it is fixed to. The rounds from the M8C follow about the same trajectory as the rounds from the recoilless rifle, so the M8C can be used to correctly aim the main gun before firing. The extremely poor penetration means that it cannot penetrate any armour, although you may be able to knock out exposed crew members (which are fairly rare at the BRs this weapon is found at).

The Resulting weapon was the Remington M8C. It chambered the 12.7x77 mm .50 BAT round (instead of the much more common 12.7×99 mm .50 BMG round). The weapon was a gas-operated semi-automatic rifle (as opposed to a machine gun), with ammo being fed in from a 10 or 20 round magazine mounted on the left hand side of the gun, and ejected to the right. The bullets it fired were designed to explode on impact and produce a puff of white smoke, in order to allow their impact point to be clearly seen.

The M8C has various historical inaccuracies in it's current in game implementation. Firstly in game the weapon is incorrectly referred to as the "M80". The weapon in game is also fully-automatic (firing repeatedly as long as the trigger is held); in reality the M8C was a semi-automatic weapon, firing only once each time the trigger is pulled. Finally in game the weapon has only a 5 round magazine, while in reality the weapon was fitted with either a 10 or 20 round magazine.