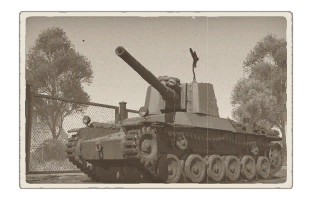 The Chi-Nu II is a premium Rank III Japanese medium tank with a battle rating of 3.7. It was introduced with the initial Japanese Ground Forces tree in Update 1.65 "Way of the Samurai", but was released once all the Rank III Japanese tanks were available to the public in the Closed Beta Test. It costs 1,600 Golden Eagles. The Chi-Nu II is essentially the Chi-Nu body with the turret from the Chi-To, giving the tank access to the high-power Type 5 75 mm. The Chi-Nu II can meet heavy tanks, but will most likely be the 76 mm KV-1 series tanks, which the 75 mm can easily punch through the front armour. The Chi-Nu II can still meet the British Churchill Mk.VII, which is impervious to the high-penetrating 75 mm from the front, so beware if caught in a frontal engagement.