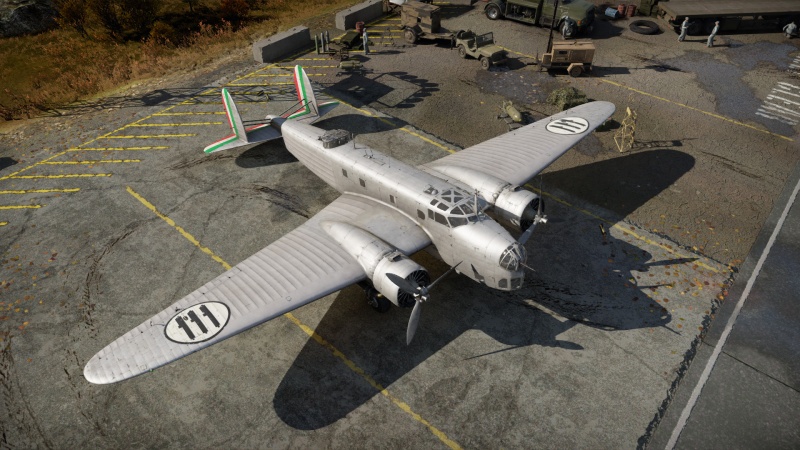 The BR.20 has a superb bomb load and is quite strong, being able to soak up a bit more damage than other comparable bombers. The defensive armament has excellent coverage; however, the dorsal gunner is quite exposed and commonly gets hit while in combat. It not only looks but also flies like a brick. This is a very slow plane and in Arcade and Realistic battles, and because these game modes are so short, by the time you reach your bombing target the match may almost be over! The BR.20 is still however quite a treat to fly and is stable and well suited to Simulator.

Another very interesting strategy the BR.20 DR is capable of is ironically, attacking other bombers. When the top & front gunner are pointed forward, the combined firepower of three 7.7 machine guns makes for a nasty surprise, especially if loaded with the AP-I belt!

The BR.20 DR is a very good bomber at its BR, at the start of battle climb to 3,000-4,500 m, and go to destroy the enemy bases, as everytime enemy fighters or other planes are gonna attack you, use your gunners to kill enemy planes, use Universal belt because it contains 1 tracer and 3 AP-I shells per belt. The AP-I shells are perfect for killing enemy planes because they can knock out the enemy pilot or set on fire the enemy planes. When you are near the enemy base, use your bomber sight for drop your bombs and after it return to the airfield to reload your bombs.

Like any bomber in Arcade Battles, they are the first too be destroyed, climb to 4,000 m-5,000 m and stay at that altitude and drop your bombs on enemy bases but remember that you can be destroyed very easily by enemy planes so be careful and check around you if they are incoming enemy planes.

The standard Italian bomber of World War 2, the B.R.20 was a technically advanced bomber for its time. More than 500 were produced over seven years, and it served on all of Italy's fronts, including Africa, Russia, the Mediterranean, and the Balkans. B.R.20s based in Belgium participated in the Battle of Britain, taking heavy losses.

Designed by Fiat's Celestino Rosatelli, the B.R.20 had a metal structure and duralumin/fabric covering. Its specifications had called for a top speed of 388 km/h, a bomb load of 1,200 kg, and a range of 960 km, all of which it easily surpassed. Two modified B.R.20s competed in the 1937 Istres-Damascus-Paris air race, but did not win. In 1939, another modified B.R.20 set an endurance record for a 4,800 km flight from Rome to Addis Ababa, averaging more than 400 km/h along the route.