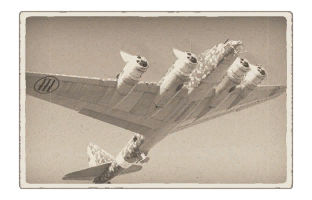 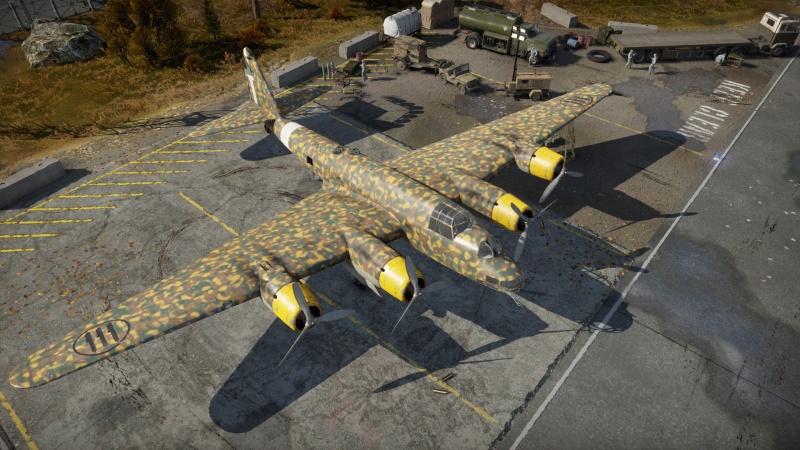 The P.108B Serie 1 is a heavy bomber with a heavy bomb load and relatively weak defensive armament. When delivering the bombs to the targets, high altitudes are a must. The preferred targets of this bomber are stationary objects like pillboxes or slow moving vehicles such as ships (if you can time it well) and of course the bombing targets and airfields. Should an enemy fighter catch up with you, it is certain doom as your defensive guns have a low chance to kill it. To survive attacks, use your gunners to ward off the enemy aircraft until help comes. Stay away from combat as much as you can and do your job as a bomber.

The P.108B serie 1 can be outfitted with the following ordnance:

Much like other heavy bombers in-game, one wants to unlock the heaviest loads ASAP and reach the strategic bomb point ASAP. The best defences are the rear hemisphere, with wing turrets offering an exceptional area of coverage and solid firepower. With that in mind the best survival technique, if unable to climb above the enemy, is to fly close to the ground. Avoid letting enemies attack from directly below or in front. In RB matches with tank columns on the road, the 34 x 100 kg bomb load is effective at destroying armoured columns, laying a dense line along the road the convoy is on will score kills and possibly win the match. Otherwise, use the max load of 7 x 500 kg bombs for medium tanks and strategic targets. When using torpedoes, load all 3, skim the surface of water and make use of islands as for a stealthy approach to the target. Spread the drop to increase the chance of 1 torpedo hitting, unless point blank, then all three can be rapidly dropped.

Building large aircraft is difficult even for large companies, and it was no different when the famed Piaggio S.p.A. endeavoured to build a large bomber in the mid 1930s. Giovanni Casiraghi had recently returned after 9 years in America and was put in charge of building the original P.50-I mid wing design being made of wood and used the common-for-the-era tandem engine layout (e.g. Farman 222). This design was disappointing so Casiraghi reworked it into a more familiar 4 puller engine layout, but still made of wood. The P.50-II flew even worse, but the experiment was not a wasted exercise.

Casiraghi's next attempt was a major redesign, this time using aluminium as the primary structure material. Now a low wing design, it had a larger fuselage, more defensive turrets, and more powerful engines resulting in the P.108. Because he was working in the US at the time the B-17 first flew and was likely well informed of aviation advances, it is possible Casiraghi took some inspiration from the Flying Fortress, but for sure this was an original design. The finished design was very robust and could carry a heavy load over long distances, but its non-turbocharged engine did not offer the altitude or speed of the B-17. The P.108 was also one of the first aircraft to offer hydraulically powered remote control turrets, located in each of the outboard engines with gunners sitting mid fuselage, and a retractable hydraulic powered turret predating the famed B-17's ventral ball turret (not the same as "dust bin" type that lowered under the aircraft, but the weapon was moved by hand).

In 1941 the first P.108s were delivered to a single unit, the 274a Squadriglia (274th Squadron). Being far larger, heavier, and a little more troublesome than other Italian aircraft, a number of accidents ensued from inexperience with this beast of an aircraft. One casualty was the commander of the 274a Squadriglia, Bruno Mussolini, son of Benito Mussolini. Bruno was considered a skilled and serious pilot thus likely earned his position as commander, so the cause of the 7 August 1941 accident is speculative.

During the war P.108's performed a number of long range missions in the Mediterranean with no notable success. It was an effective bomber, but the numbers where never sufficient to impact the Allies. Loses mounted changing tactics and removing weight. By the time Italy surrendered only 9 of the approximately 24 built P.108B's remained. An interesting footnote, over a dozen of the transport version, P.108T, were also built, most of those were confiscated by the Germans and used to evacuate troops on the Eastern Front.