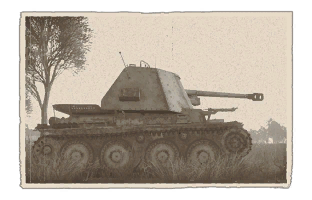 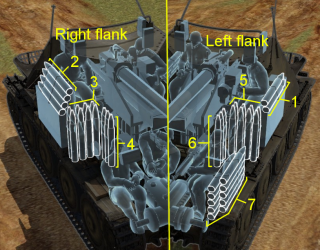 Since the Marder can be hullbroken in one hit, the Parts modification is not as important. Also, the stock shell is quite effective, so the Ml.Gr 38B HEAT shell and PzGr 40 APCR shell are not priorities for research either. Instead, focus on mobility upgrades and the Horizontal Drive modification. Then, Parts and FPE should be researched, and after that the order or research will be determined by personal preference.

The Marder III Ausf. H fought on all fronts of the war, being produced from 1942 to 1945, with 450 Marder III Ausf. H with the Pak 40 converted and produced. Using the tested design of the Panzer 38(t), the Marder III experienced a reliable mechanical history and has a gun that could take out most allied tanks in the war. The vulnerability to the crew due to lack of armour was its most pressing issue, with only a front shield plate at most 15 mm thick and side plates that can't enclose the crew. This makes it as very poor assault vehicles or tank substitutes as the open top could allow infantry to easily kill the crew from hidden areas, despite that, it is sometimes repurposed to this role to the chagrin of the crew.