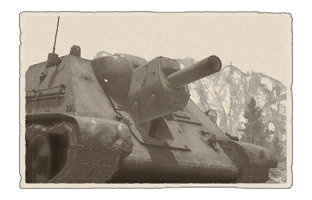 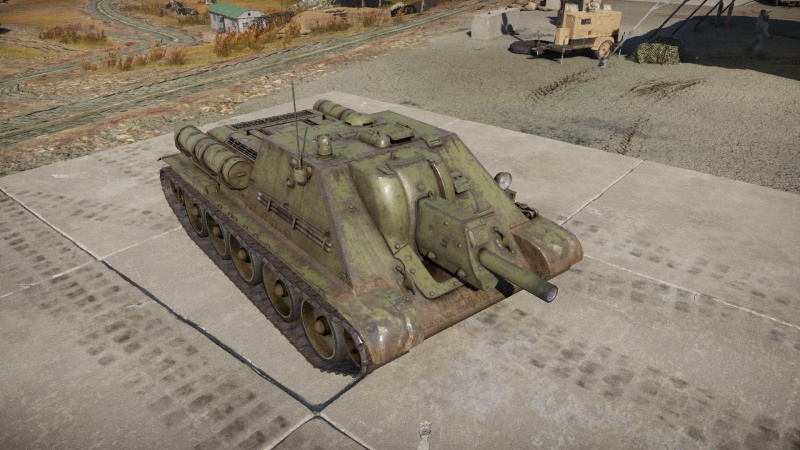 The SU-122 is a rank II Soviet tank destroyer with a battle rating of 2.3 (AB/RB/SB). It was introduced during the Closed Beta Test for Ground Forces before Update 1.41. This vehicle was created on T-34 chassis and carries a fearsome 122 mm M-30 howitzer.

The main feature of this SPG is a powerful gun, but make good use of the first shot. It is very hard to hit targets from over 500 m in Realistic and Simulator battles. One good tactic would be to rush an enemy tank and shoot it at point-blank range but this only works if there is no other enemy tank because with an untrained crew it can take up to 33 seconds before the SU-122 has reloaded.

The front glacis of the tank is very strong. Sloped at about 50° with 45 mm of steel, and an even stronger lower glacis reaching up to 100 mm of armour with an angle about 20-70°. This allows you to face some enemies with lighter armament frontally and tank their shells. Note that if you lose your gun and/or tracks, you're losing all means of fighting back or retreating. Having 5 crew members is not spectacular, but it still gives you a fighting chance if 1 or 2 crew members are knocked out. 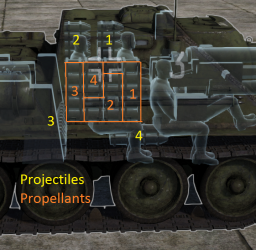 The main feature of this SPG is a powerful gun, but make good use of the first shot. It is very hard to hit targets from over 500 m in realistic and simulator battles since shell velocity is slow and shell drop is significant. The cannon's HEAT shell has excellent destructive power and higher penetration than its HE shell (and in fact can penetrate almost anything it will face), but it also has a slower shell velocity than the HE shell. Practice makes aiming at long distances easier, but it is still recommended to stay at close to medium range when possible. One tactic would be to rush an enemy tank and shoot it at point-blank range, but this only works if there is no other enemy tank nearby because with an untrained crew it can take up to 33 seconds before the SU-122 has reloaded.

This slow reload rate also means that the SU-122 cannot effectively deal with multiple enemies at the same time. Therefore, team play is almost a necessity. This is especially important since, of course, the SU-122 is a case-mate tank destroyer without a traversable turret. The vehicle's flanks are incredibly vulnerable to enemy flankers, and although the side armour can stop small-calibre rounds, they will not usually stop shells from enemy tanks. It is very important to keep a constant lookout for enemy flankers, especially when fighting at closer ranges where the enemy can sneak up without your noticing.

When the loader(s) is wounded or knocked out, the long reload time will become even longer, and playing effectively with the SU-122 then becomes very difficult. So, avoid exposing the loader to enemy fire when possible. Thankfully, the SU-122 has a decent armour layout. Its front armour, while not amazing, can still protect against some low-rank guns, and the gun mantlet is very strong. The tank also has a fairly small silhouette. Nevertheless, the armour is not sufficient against high-rank guns, and due to the crew layout within the tank, a shot to the left side can knock out three of the five crew members--including the driver and the gunner. This is a debilitating hit and will often result in the SU-122's outright destruction. If possible, position your tank so that it is difficult for the enemy to hit this left side of your vehicle.

The SU-122 plays well has a hull-down tank destroyer: this is where its powerful gun shines and where the issues caused by its long reload are minimized. If choosing this playstyle, the player should remember that the SU-122 suffers at long ranges due to its slow shell velocity. Therefore, choose hull-down positions so that the enemy will appear at close or medium ranges. Also be aware that the SU-122 has bad gun depression, which can make shooting over ridgelines very difficult.

Another possible playstyle is close range brawling. In this playstyle, it is important to work with teammates, since the lack of a turret means that the SU-122 has very little side protection; it can only deal with enemies from the front. It it aided by good mobility and great acceleration, which are both useful qualities to have in close-range fighting.

The success of the Germans StuG III and other self-propelled assault gun took the Soviet High Command's interest on the concept. Self-propelled guns were generally considered cheaper and more easily produced compared to regular tanks due to the lack of turret, plus it could be made with a large fighting compartment and bigger guns than those that could be mounted on turrets, the only drawbacks to the designs were limited traverse of the gun so it would do poorly in close-quarters situations.

On the 15th April, 1942, the Soviets asked design bureaus to begin development of assault guns using a wide selection of armament ranging from their 76.2 mm ZiS-3 field guns, 122 mm M-30, and 152 mm ML-20 howitzers. The prototype assault gun was armed with the 122 mm and was quite similar to the StuG III's design, designated the SG-122, of which only 10 were made due to reliability issues. The next step was to take the standard issued Soviet tank, the T-34, and convert that into the assault gun. The prototype, U-34, was created in summer of 1942 in the Uralsky Machine Building factory by N. W. Kurin and G. F. Ksjunin. It initially had the same armament of 76.2 mm, but it was 70 cm lower than the regular T-34 and had more armour at a lighter weight, this did not enter production. Another work was done to combine the U-34 features with the SG-122, this was completed in around late summer of 1942 and featured the U-34 chassis with the 122 mm armament placed on with the least modifications possible to keep the design affordable and easy to produce. This new design, now the U-35, was created on November 25, 1942, and was sent for evaluations. There were faults discovered in the elevation mechanism, loading system, and ventilation for the crew. Despite these flaws, the vehicle was accepted into service first as the SU-35 but then renamed the SU-122. Several modifications were made to the vehicle during production, such as simplifications to the design, modified interior layout, removed vision slots, and added a commander's periscope. The production began in December 1942 and continue on until summer of 1944 with 1,150 total unit produced.

The vehicle was based off the T-34 chassis, so it uses the same running gear, engine, suspension, and tracks as the T-34. This is consistent with the concept of utilizing the chassis of proven vehicles and converting them into other uses. The design mounted the 122 mm M-30 howitzer, which was made for infantry support in a role similar to the StuG III in German usage. The M-30S howitzer could be elevated or depressed between −3° and +26° and had 10° of the traverse. The design had no armour advantage over the standard T-34 with 45 mm thick frontal armour to keep production simple. The design had a crew of five: a driver, a gunner, a commander and two loaders to load the 122 mm shells.

The SU-122 in combat proved very effective in its role as direct fire support on strongholds. The high-power high-explosive rounds create a massive concussion blast on impact and may be powerful enough to even knock the turret off a Tiger I tank. Until May 1943, only the HE rounds were available for the 122 mm gun, but the BP-460A HEAT rounds were introduced on that month that could theoretically penetrate any armour the German have on their tanks, but the HEAT round's primitive design and fuse, adding the gun's inaccuracy, caused the SU-122 to not be an effective tank destroyer.

The SU-122 was never mass-produced in multiple variants, however, some were converted into prototypes. The SU-122M had a larger compartment and newer D-11 gun, and the SU-122-III had an even lighter gun than the D-11, but was unsuccessful due to unreliability. Both of these were cancelled when production priorities went to the SU-85 design.

Only a small number of SU-122s survived the war, with only one known example on display at the Kubinka Tank Museum.

This SPG armed with a 122 mm М-30 Mod. 1938 howitzer was developed in October-November 1942 to support and escort tanks. In December of the same year, it entered production and was put into service.

The SPG was built on a T-34 chassis with an armoured cabin containing the driving compartment and the fighting compartment. To protect the howitzer's recoil mechanism, a large forward-extending armoured mantlet was used which swung with the weapon. The gunnery equipment could be used to fire both directly and from cover. The howitzer's ammunition load of 40 shots included high-explosive fragmentation shells and hollow-charge projectiles. The vehicle's undercarriage differed from the T-34 in the strengthened head assembly of its suspension. A 9R radio set was mounted on the SPG, along with the TPU-3-BisF intercom.

The vehicle was produced throughout 1942-1943, with 638 manufactured in total. Throughout its production, a large number of modifications were implemented with the aim of improving the vehicle's quality and simplifying its manufacturing. Work performed on perfecting the manufacturing and assembly technologies involved reduced the labour costs of its production by 15%.

The SU-122 was put into service in SPG regiments in quantities of up to 16 vehicles per regiment.

The SPG's flaws were: its small horizontal firing angle and complex aiming; long barrel length complicating manoeuvring on rough terrain and in urban areas; low rate of fire in combat; relatively small on-board ammunition capacity; and lack of a machine gun for self-defence. In spite of these flaws, the SU-122's high firepower, manoeuvrability and defensive capabilities made it a dangerous opponent in battle.