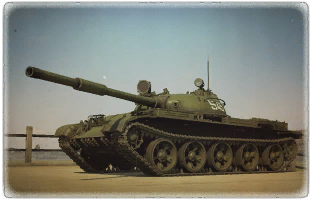 The 115 mm U-5TS smoothbore gun is a potent gun capable of firing APFSDS, HE-FS, and HEAT-FS ammunition. It is stabilised, allowing for accurate firing on the move. The turret traverse is also significantly improved over that of the T-54, and the turret also provides more gun depression, allowing for some use of hull-down tactics. It should be noted that the gun has limited depression when the gun passes over the hull fuel tanks (at roughly 45 degrees to each side). Due to the large size of the 115 mm ammunition and cramped space of the T-62, the reload is much slower than that of comparable NATO tanks (~10–12 s depending on crew skill level and training).

The tank still exists today and is currently on display in the Military Museum of the Chinese People's Revolution.