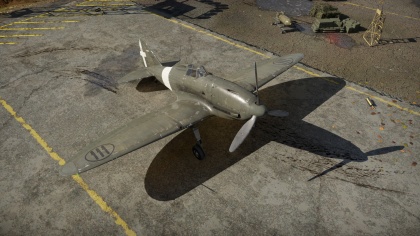 The successor to the Re. 2000 was the Re. 2001, which was in a class with the excellent Macchi M.C. 202, but its operational career was limited, with priority on the scarce DB 601 aircraft engines going to the other fighter. A total of 237 were built, including the original interceptor, and fighter-bomber (CB) and night fighter (CN) variants. First flight was July, 1940. It had the same wing as the Re. 2000, but a new inline engine. This again led to objections by the Italian government about the wing fuel tanks. Redesign meant the first planes weren't delivered until June, 1941. It served in operational squadrons from December, 1941 until the Italian surrender.