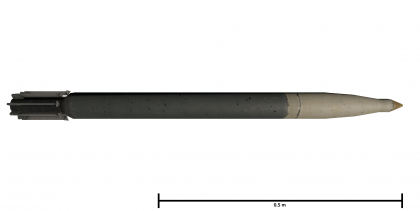 The R4M rocket is a German-developed anti-aircraft rocket produced during World War II. R4M stands for the German, Rakete, 4 Kilogramm, Minekopf (English: Rocket, 4 kg, mine-head). This rocket was developed as a light-weight fix to replace heavy autocannons on bomber interceptor aircraft, especially jet fighters which due to their speed, only had so much time on target before having to reorient and reengage which increased the chance of being shot down.

The effective damage of the R4M rockets is shattering force which can effectively disable a fighter. A salvo can take out a bomber aircraft.

The Luftwaffe ran into problems when attacking American bomber formations due to the fact that the bombers set up in a formation which allowed for defensive guns to provide significant cover fire, making it very dangerous for the fighters to make a shot. Fighters with the 20 mm MG 151/20 cannons found that it took 20 rounds or more on average to bring down a bomber, whereas those sporting a 30 mm MK 108 cannon could take out a bomber with between one and three shots if well placed. While powerful, these rounds had a horrendous drop rate, approximately 41 m for every 1,000 m it flew. Typically several passes were required at close range for the shots to hit, again at significant peril to the fighter pilot. Another factor was the weight of the cannons and the limitation of ammunition rounds as heavier weights caused the fighters to be sluggish with their manoeuvrability.

An attempt to address this was made with the Werfer-Granate 21 (Wfr. Gr. 21) rockets, but these required tube launchers which caused enough drag to seriously affect the flight performance of the aircraft. Another issue necessitated the pointing of the aircraft 15 degrees above where the target was to counteract the drop of the rocket during flight. The excess weight and underwhelming performance of these weapons caused the Luftwaffe to look for another solution which will provide the weapon performance they need without the undesirable side-effects of excess weight or ballistic-poor ammunition.

The solution to these problems was the 55 mm R4M rocket which housed a strongly brisant explosive charge known as Hexogen. Due to the shattering force of this type of warhead, it was guaranteed to take out a fighter aircraft if it hit close enough. The effective power of this warhead was equal to 30 mm rounds fired from a MK 103 or MK 108 cannon. Each rocket weighed in at only 3.2 kg and was packed with enough solid rocket fuel to be fired from a range of 1,000 m which kept the fighter just out of the range of any defensive armament used in enemy bombers. These rockets were mounted under the wings of the aircraft with a total of 24 rockets. While individually these rockets weighed more than their counterpart cannon ammunition, the overall weight savings of not needing the larger 20 and 30 mm cannons made up for it.

The R4M rockets were of the simple construction of a simple steel tube with the warhead at one end and eight flip-out fins on the end with the motor. After deployment, these fins would flip-out and stabilize the flight of the rocket which flew at a supersonic speed of 1,890 km (1,175 mph), over 60% faster than the older Wfr. Gr. 21 rockets. These rockets could be fired individually, in groups or as an entire salvo and had a tight enough spread that if launched at a target it was almost guaranteed one or more would hit. For the anti-aircraft warhead on the R4M, the PB-3 was used which contained 0.4 kg of explosive charge whereas an anti-tank version PB-2/3 contained a much larger shape charge.

Only a small handful of aircraft ever used the R4M operationally, the Messerschmitt Me 262 and ground attack versions of the Fw 190. It was tested on the Me 163A briefly, becoming the first rocket-propelled aircraft to fire a rocket-propelled armament.