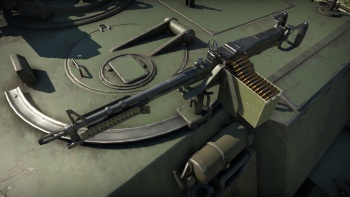 The M60D is an American 7.62mm General Purpose Machine Gun (GPMG). In game the weapon can be found as a loader's roof-mounted machine gun on the XM-1 (GM) and XM-1 (Chrysler). Being only a 7.62mm machine gun it is largely ineffective against all but the most weakly armoured, or open cabin, vehicles.

The M60D can only be equipped with one ammo belt consisting of one Armour Piercing (AP) bullet, followed by one Tracer (T) bullet. Neither bullet has much penetration (maximum of 10mm), however the AP bullet performs much better than the tracer bullet.

The M60 is an American General Purpose Machine Gun, cambering 7.62×51mm NATO round. Following WW2 America began a program to develop a new, lighter 7.62 mm machine gun; in order to replace the M1918 Browning Automatic Rifle and M1919A6 Browning machine gun (a M1919A4 with a shoulder stock, designed for infantry use). The M60 was designed by Saco Defense, with parts of the gun inspired by aspects of the German FG-42 and MG 42, as well as the American M1941 Johnson machine gun. The Saco T161E3 prototype was tested against weapons such as the FN MAG and modified MG 42s, and in 1957 was officially adopted by the US army as the M60.

The M60 saw service throughout the Vietnam war, the gun was seen as bulky by troops, but it was still fairly lightweight. The weapon picked up a reputation for being easy to damage, and components wore out fairly quickly, however it was liked by troops due to its simplicity and versatility. The M60 began to be replaced in the 1980s in favour of the lighter M249 Squad Automatic Weapon (SAW), however was retained in some numbers due to it's better accuracy, longer range and better stopping power compared to the M249.

From 1995 onwards the M60 began to be largely phased out from US service in favour of the more reliable (albeit heavier and less controllable) M240 (7.62 mm) machine gun. Small numbers of M60s are still in use today by the U.S. Coast Guard, U.S. Navy, and some reserve units. Internationally the M60 is still used by a number of countries.

The M60D variant was designed as a mounted version of the M60. It differs from other models in that it has spade grips (like the Browning M2HB), instead of a pistol grip. It was mounted on a range of armoured vehicles, boats and helicopters and is still used today on SH-60 Seahawk helicopters and RAF CH-47 Chinooks.