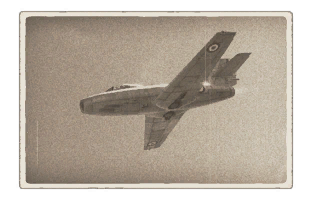 The M.D.450B Barougan is a Rank V French jet fighter with a battle rating of 7.7 (AB/RB/SB). This aircraft was introduced in Update 1.73 "Vive la France".

The four machine guns are clustered on the underside of the fuselage, directly below the pilot. Each is armed with the same amount of ammunition, which means that all guns will fire with each other until empty.