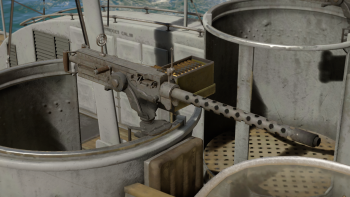 The AN-M2 is a version of the M2 Browning machine gun mounted on naval vessels as a primary or anti-aircraft weapon.

The Army-Navy-M2 Browning, or AN-M2, is one of the longest-serving machine guns in military service and is still serving with the US Navy. Affectionately called "Ma Deuce" by the Americans that used it, the M2 was developed during World War I by John Moses Browning as an aircraft machine gun. Intended to take down the Junkers J.I, which was the first armored fighter aircraft, the gun was a scaled-up version of Browning's earlier M1917 water-cooled machine gun developed alongside Fred T. Moore and finished in 1921. In 1932 an improved version of the original M2 Browning was introduced with a lightweight barrel that weighed 60 pounds, which would become the AN-M2. This version was primarily used to arm aircraft, but the gun was also used to arm US Navy PT boats as primary or secondary weapons, anti-boat defense on smaller ships such as frigates or corvettes, and was the original anti-aircraft gun for larger United States Navy ships such as USS Arizona during World War II.

The M2 was used in mounts up to six guns on US Navy ships. The AN-M2 was notably used during the attack on Pearl Harbor by Cook Third Class Doris "Dorie" Miller who shot down multiple D3A1 Val from an AN-M2 gun mount on the USS West Virginia[1]. The AN-M2 would remain the main anti-aircraft naval gun until the adoption of the 20 mm/70 Oerlikon Mk.II due to the more powerful explosive shell. Even after World War II, the AN-M2 has been used to arm a wide variety of smaller navy craft such as the PBR from the Vietnam War and the USS Cyclone and is still used on larger ships such as the littoral combat ships and auxiliary crafts to repel boarders.