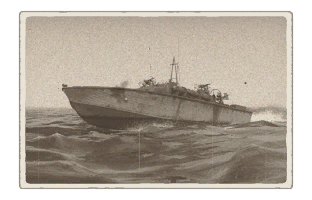 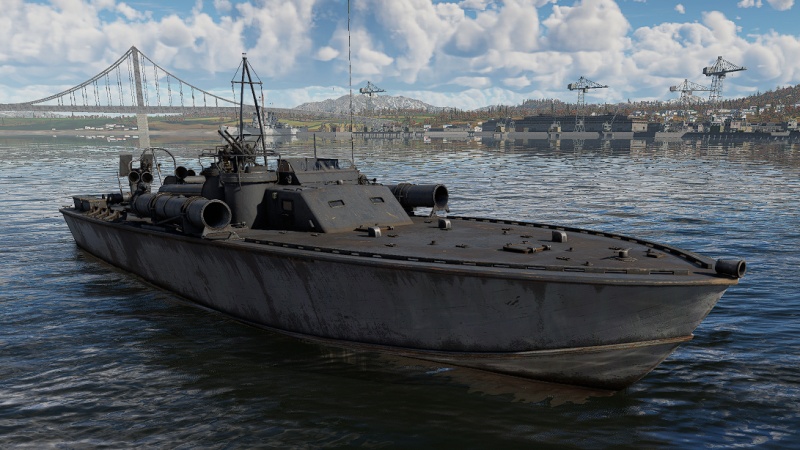 The Elco 80 ft PT-103 has relatively average survivability for a boat of its size. The boat lacks armour (apart from some hardened armour on the bridge and on the Oerlikon cannon) and is constructed entirely out of wood, resulting in poor survivability. The ship boat a crew count of 12 crew members, which is pretty average for the most part. The vital components are clustered towards the center of the vessel, which is pretty normal for most boats of its size.

The PT-103 has decent mobility for a small MTB. The boat can make a top speed of 106 km/h in AB spaded, or 76 km/h in RB spaded; this makes it a very fast vessel, slower than some Soviet boats like the G-5 or Pr. 123, but faster than most boats at its BR. The rudder shift and turning agility aren't the best, given that the PT-103 is a relatively large PT boat. As a result, it is always safer to plan your manoeuvres well before you execute them with this ship, since the vessel's turning circle and agility are subpar even with the rudder replacement upgrade.

The primary armament consists of two twin .50 cal M2 Browning machine gun turrets, for a total of 4 .50 cal machine guns. The turrets are set towards the center of the hull, one to the right of the bridge and one to the left, rear, of the pilot house. One drawback of the turret placement is that only one turret (2 machine guns) can be pointed in most directions. Only one turret can fire forwards, only one turret can fire to the left, both turrets can fire to the right, and neither turret can fire towards the rear. On the other hand, the turrets have excellent elevation angles (up to +60 degrees), allowing these turrets to effectively engage aerial targets. The .50 cals can shred torpedo boats in seconds, especially when broadside, but against more heavily armoured targets they may struggle. Against aerial targets, multiple hits will normally be required to down one, but with the good fire rate of 576 rpm multiple hits can be regularly attained.

PT-103's secondary armament consists of one 20 mm/70 Oerlikon Mk.II autocannon. The Oerlikon cannon is mounted on the rear deck of the ship, and it has very good traverse (±180 degrees) and elevation angles (-5 to +60 degrees). The fire rate of 450 rpm is decent, and the reloading rate is very quick at only 4 seconds. The 20 mm can be used against air and sea targets, and deals heavy damage; it can cripple an enemy aircraft with as few as only one hit and can also disable an enemy torpedo boat in seconds. The only downside to the Oerlikon is its placement: it can not fire to the front of the ship. This means that you will not be able to get the Oerlikon on target when facing towards the enemy. It is not recommended to face the rear of the ship towards the enemy, but in the case than an enemy gets behind you the 20 mm can deal heavy damage very quickly. It can also fire to the sides.

Two Mk.8 torpedoes can be equipped, even when stock; they are located one on each side of the bridge. They are not independently aimed, and as such to aim them you will have to turn the entire hull of the ship. They can be fired at any speed, with any direction of travel. These torpedoes can be incredibly useful, as they can usually destroy smaller boats outright, and will severely damage even most of the largest ships you will face. The torpedoes have an arming distance of 50 meters and a travel distance of up to 9.14 kilometers.

After research, 8 Mk.6 depth charges can be equipped. They are located on either side of the hull rear, with four on each side. These will generally not be effective in combat, although in certain rare situations they can be. As such, you may consider not bringing depth charges, as most of the time they will not be useful and they also function as additional ammo racks, increasing the likelihood of your untimely demise.

It was assigned to Motor Torpedo Boat Squadron 5 (MTBRon 5), commanded by CDR Henry Farrow, USN. MTBRon 5 was assigned to the Panama Sea Frontier from 1942 to 1943. Afterwards, it was sent to the Solomon Islands where it saw action at a number of locations, including Rendova, Vella Lavella, Treasury, Bougainville, Green, and Emirau. At the end of 1944 the squadron was disbanded, and the ships were distributed between other squadrons to replace lost ships.

The USS PT-103 was transferred to Motor Torpedo Boat Squadron 18 (MTBRon 18) under the command of LT Edward MacCauley, III, USNR, on February 15, 1945. MTBRon 18 was assigned to the Southwest Pacific. It saw action at Dreger Harbor, Aitape, Hollandia, Wakde, and Mios Woendi, in New Guinea; at Manus in the Admiralties; and at Morotai in the Halmaheras. The squadron was also temporarily based at Kana Kopa, New Guinea, and later at San Pedro Bay, Philippines. PT-103 was scuttled by American forces on November 4, 1945, at Samar, Philippines.